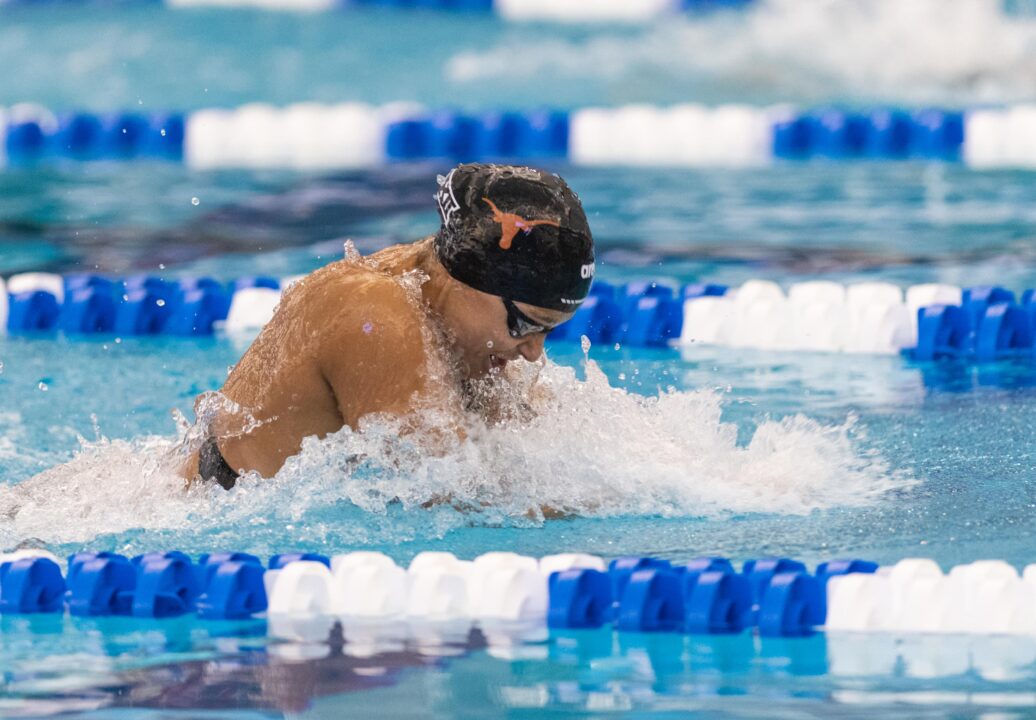 Anna Elendt highlighted the second finals session in Berlin. The 19-year-old is the first German woman to crack the 1:07 barrier in the 100m breaststroke. Current photo via Luke Jamroz Photography ©

Anna Elendt highlighted the second finals session in Berlin. The 19-year-old is the first German woman to crack the 1:07 barrier in the 100m breaststroke. Elendt already made a promise for a fast race tonight with her prelim’s result of 1:07.56 (personal best: 1:07,17). In tonights final, Julia Titze stepped on the gas on the first 50m and made her turn with a time of 31.21 ahead of Anna Elendt in 31.69. But Elendt showed her talent and experience with her backhalf speed of 34.81 and finished with a new German record of 1:06.50. Anna Elendt is qualified for the German Olympic 4x100m medley relay. The former German record was held by Sarah Poewe since 2009 with a time of 1:07.01. Back then, the full-body high-tech suits were allowed. In a post-race interview, Anna Elendt said she was totally surprised by her time because she is not tapering at the moment. She has been back from the USA, where she is studying at the University of Texas, since Sunday.  Also making it to the podium were Julia Titze in second place in 1:08.14 and Bente Fischer in 1:08.42 for third. Julia Titze made a big jump by improving her previous personal best of 1:09.29.

Poul Zellmann is a man on a mission in the freestyle events, he is registered for all distances from 100 m to 1500 m freestyle. In total, he will achieve with all heats and finals 3700 competition meters in the pool at this championships. In an interview with the German Swimming Federation, he said: “I always compete to win. Over the 100m with Damian Wierling as an opponent it will probably be difficult, but otherwise it’s already possible.” Poul Zellmann is qualified for the Olympics for the 4x200m freestyle relay. But in tonight’s final, it was Sven Schwarz who grabbed the win. He touched the wall in a personal best time and German age group record for 19-year-olds of 7:52.02. Schwarz was unable to participate at the German Olympic qualifying meets April because he was sick with Corona. His time today is only 2.02 seconds above the German standard for the Olympics, although the qualification period is over anyway. Silver went to Oliver Klemet in 7:55.12 and bronze to Henning Mühlleitner in 7:57.77. Poul Zellmann finished 6th in 8:11.45.

Two 2021 Olympians competed for the title “German Champion 2021” in the 100 m breaststroke: Lucas Matzerath, who achieved the fastest time in this morning’s prelims, and Fabian Schwingenschlögl, the current German record holder. About his rivalry with Schwingenschlögl, Lucas Matzerath emphasized: “We are not enemies and look at each other grimly at the pre-start. In the pool, everyone fights for himself, but outside we are very collegial and get along very well. It’s always a boost when you see that a teammate  was very fast. You immediately bring more energy into training and say to yourself, I want to get close to that time and also swim at the top.” Matzerath and Schwingenschlögl cracked the minute mark in the final, Matzerath took the win in 59.44 (PB 59.42) ahead of Schwingenschlögl in 59.96. The bronze medal was snatched by Melvin Imoudu in 1:oo.43.

Nina Kost, who trains in Heidelberg, Germany,  and competes internationally for Switzerland, grabbed the gold medal in the women’s 100m backstroke in 1:00.67 ahead of Jenny Mensing in 1:01.76 and Sonnele Öztürk in 1:02.10.

Leonie Maertens won her second title. She set a new personal best time in the 400m freestyle race with 4:12.26. Yesterday she took the title in 1500 m freestyle. Kathrin Demler finished behind Maertens in 4:13.12 followed by Lara Seifert in 4:17.03. During the whole race Leonie Maertens and Kathrin Demler swam almost identical split times, in the end the 17-year-old Maertens prevailed.

Really surprised by Elendt’s improvement. She was almost 0.7 seconds faster than at the german olympic qualifier in April, despite not being tapered. Not sure what to make of it, let’s see if she will be able to replicate this time in Tokyo …

Breaststroke is rapidly improving also on the women’s side. At last Worlds Carraro won the bronze medal in 1.06.36, just 14 hundredths faster than this untapered performance from Anna Elendt (she would have been fifth in that final, and her 34.81 back-half is less than 2 tenths slower than the split swum by Lilly King, winner of that final). It was clear that Elendt was getting quicker and quicker also following her Ncaa season’s results and, with a good finalization, she’ll aim at the 1.06 barrier at Tokyo (I think that German federation will enter her also in the individual event now..).

I wish more countries would allow their fast swimmers to still qualify, the international qualifying period is not over.

Anna is in good form in the lead-up to Tokyo!