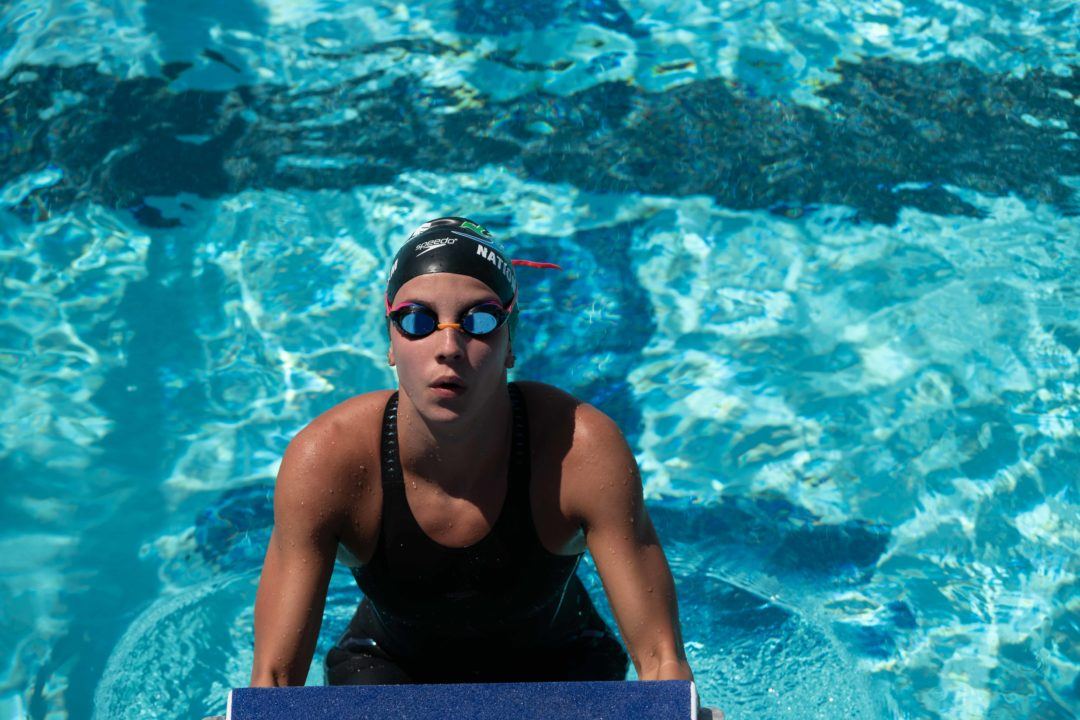 The 2020 Pro Swim Series isn't even half over, but the race for the women's title might as well be. Here are the ridiculous times needed to pass Regan Smith. Archive photo via Mike Lewis/Ola Vista Photography

The 2020 Pro Swim Series isn’t even half over, but the race for the women’s title might as well be. With Regan Smith‘s absurd speed in Knoxville, it’s going to take an otherworldly swim to knock her off the top of the current standings.

For the second season, the Pro Swim Series doesn’t give out its $10,000 series winner prizes based on cumulative points. This year, as it was last year, the winner will be determined by the single best swim (in FINA points) of the entire series. FINA points attempt to compare swims in different events by creating a points system in which the world record is worth 1000 points. Swims slower than the world record earn less than 1000, based on their relative distance from the world record, and new world records will earn more than 1000, depending on how much faster they are than the previous world record.

While that system has its critics, it is the one being used for this year’s Pro Swim Series title. And it’s relative simplicity means we can come up with ‘benchmark’ times that would be needed to beat Smith’s 58.27 100 backstroke from the Knoxville Pro Swim Series over the weekend.

The Pro Swim Series is using FINA’s 2019 Power Points table, which is based off of world records as of January 2019. (That means Smith’s backstrokes are scored based on the former world records, not her new world records set over the summer). Smith scored 986 points with her 100 back in Knoxville. Here’s a look at the slowest times that would earn 987 points and knock Smith off the top of the list:

While the series does award $10,000 to the winner, Smith is still maintaining her amateurism for NCAA eligibility. That’ll put some restrictions on how much (if any) of that award she can accept. But the PSS title also comes with plenty of prestige. And it looks like Smith is squarely in line for that honor.

Oh, and if there’s a tie, the tiebreaker is highest FINA points in a second event. Smith has already gone 2:05.94 in the 200 back for 955 FINA points. So even if another swimmer can muster up a 986-point swim, they’ll have to get a second event above 955. Good luck with that.

Back in the 1980’s and 90’s Nick Thierry used to create these power point tables and world rankings. 1000 points was the average of the top 8 swimmers’ times in each event. That seems to me to be a better metric and helps to buffer the arrival of a ridiculous time as in the 200 fly.

Exactly, I was wondering when they just went to the WR as the standard for 1000. They have used various standards in the past but most included with the top 8 swimmers or the top 10 times of all time. This mitigates to some degree the problems of the 200 fly. Only somewhat though as the supersuited times in the 200 Fly are all 204 or lower and going 204 is still incredibly rare outside the supersuits.

Nick. His magazine was highly anticipated at our house every month…

i really, really think Smith should go pro before this summer. i actually think that college swimming is great, but come on…not smart for her. her dream may be to go to stanford, but isn’t another very fascinating dream to earn tons of money for your passion? isn’t that like, everyone’s dream…..?

Being junior in HS at the time of this college rush, exams, applications etc my son asked me why should he go to college. I knew that his question was rhetorical and nothing serious. Just to irritate parents a little bit. But I was surprised that I didn’t find what to tell him not being banal and preachy, saying something that I didn’t believe in.

I totally agree. I love college swimming too, and my time on a college team was really special. (Def not Stanford level, but still.) But she would be giving up an even more unique opportunity if she doesn’t go pro and, frankly, one that will leave her in a much better position for her future.

She should at least get into Stanford first before going pro. A Stanford degree goes places

So does cashing in on multiple world records, doing ISL, etc. She could be a millionaire by 20.

That buys plenty of tuition fees.

Ok that 2:02.37 200 fly highlights how ridiculous this system is. Sorry if your best event is the 200 fly lol. If feel like FINA points should be calculated using an average of something like the top ten fastest performers in history rather than just the world record if it’s going to be used as a benchmark to compare swims. That way outlier performances or performers (Liu Xiang 200 fly, Paul Biedermann 200 free, Ledecky in general, Adam Peaty 100 breast) don’t completely screw the system.

I know the flaw with this argument is by definition WRs are outlier performances, but not all are created equal. In some events like the women’s 200 fly it’s just down right unfair to… Read more »

2Back time is do-able by R Smith

“The PSS title also comes with plenty of prestige.” Bwah-ha-ha-ha!!!

I know these times are based off of what would score 987 points, but what if someone swam a 58.26 in the 100 back? Apparently 58.25 is the threshold for 987, but if someone tied Regan Smith’s points but beat her time, does it still defer to second best event?

The FINA point system is only updated every so many years. Men’s 2breast is an “easy” event to score big points because that WR has dropped after last update and the event is ridiculously deep right now at top. Regan’s WRs haven’t been included so it is soft for her! The old Canadian charts are much more accurate and change with the times!

Imagine if your main event was the 200 fly and you had to go a time no one has done in a decade because of a ridiculously fast suited swim in 2009. It might be better to do these power points based on comparison to the fastest/winning time at the most recent WC or Olympics.

I think that moving 52 weeks or 100 weeks ranking period will be more appropriate measure of quality of swimming. That is how it’s done in many other sports. Swimming may need longer ranking period because swimming competitions are not that frequent.
And times are not necessarily should be involved. Ranking position by itself can be the measure of quality. Some kind of ELO system can be used for ranking.

And remember that those points are not needed as absolute measure of quality to be compared against world records. This “points” measure is only needed at the time of reward distribution and there is no use of involving some world records that may have nothing to do with current state of affairs in competitive swimming.

Just remember that by this logic, Katinka comes out nicely 😉

But Mary T’s time was legitimate. One issue I have with the women’s 200 fly record being the standard is that it was a super suit record.