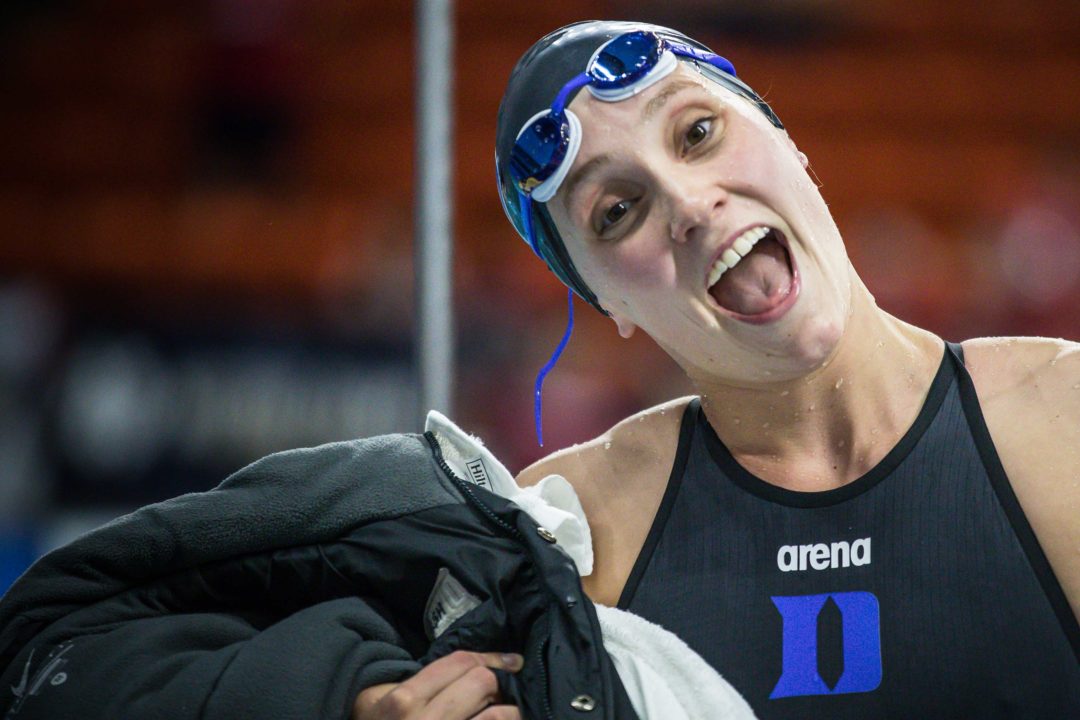 Alyssa Marsh is the 2nd-fastest 50 yard butterflier in medley relay history, a position she reaffirmed on Wednesday at the ACC Championships. Archive photo via Jack Spitser/Spitser Photography

And by the end of this season, she might stand alone as the best swimmer in history in a very specific place.

Marsh split a 22.05 on the butterfly leg of Duke’s medley relay on Wednesday in Greensboro as the Blue Devils swam to a 4th-place finish in 1:35.93, which also earns them an automatic invite in that event to the NCAA Championships.

Her split was so fast, that she actually outsplit her own freestyle anchor, freshman Sarah Snyder who swam a 22.25, as well as 5 other anchor legs in the 12-team field.

Marsh’s abilities in the 50 yard fly first caught our attention at last year’s Duke-UNC dual meet, where she split 22.84 on a 200 medley relay butterfly leg. A few weeks after that meet, at the 2019 ACC Championships, she dropped a 22.37, which was better than Michigan’s Maggie MacNeil did at the Big Ten Championship meet that year. Marsh finished the season with a 22.16 split at the NCAA Championships.

This season, she’s taken that to a new level. At the UNC dual meet a couple of weeks back, she split 22.00, which as far as we can tell is the 2nd-best split in history, just .04 seconds behind Kelsi Worrell’s split on Louisville’s 200 medley relay at the 2015 NCAA Championships. That same year, Worrell became the fastest 100 yard butterflier in history. While no official records are kept for relay splits, breaking Worrell’s 21.96 would still be a fairly-significant accomplishment.

The next-best butterfly split at last year’s NCAA Championship meet was a 22.57 from Wisconsin’s Beata Nelson on the Badgers’ 14th-place relay (though Louise Hansson split 22.51 for USC on a disqualified relay, where she was not the swimmer at fault for the disqualification).

Another big split at the meet came in the form of a 26.21 from NC State sophomore breaststroker Sophie Hansson on the Wolfpack’s 2nd-place relay. Our records indicate that this split ties Breeja Larson as the 5th-best swimmer in history, behind only Miranda Tucker’s 26.20 (also swum on Friday evening at the Big Ten Championships), Ida Hulkko’s 26.19 for Florida State at last year’s ACC Championships, Molly Hannis’ 26.06 and Lilly King’s 25.38.

Lindsey Kozelsky has split 25.9 I believe

The UVA / NC State 200 medley relay was a lot closer than I thought it would be!