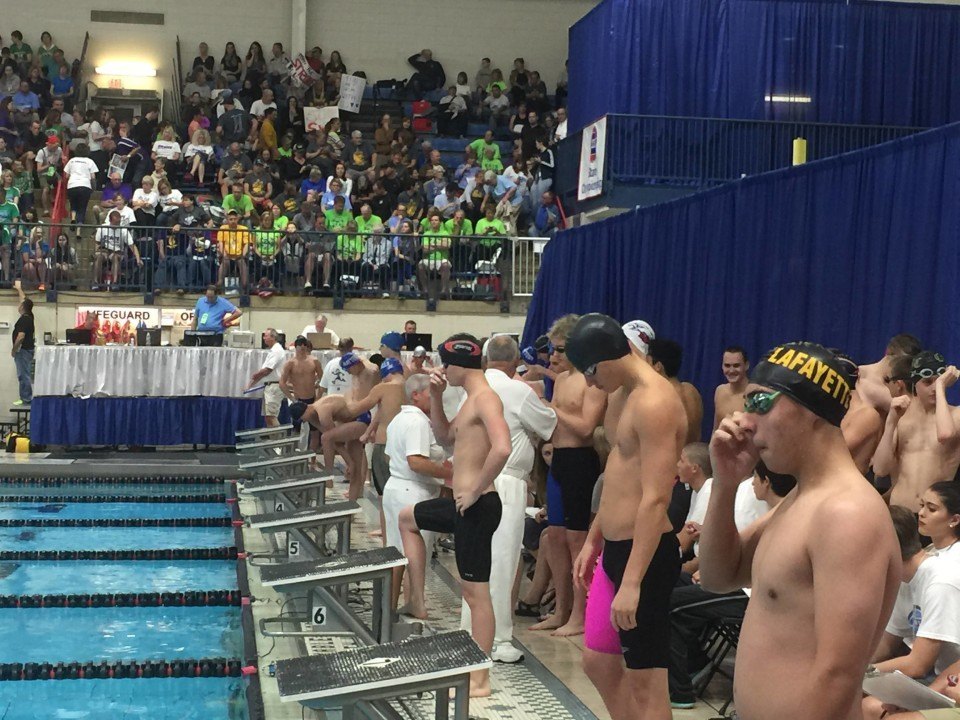 The boys MSHSAA Championship preliminaries at the St Peters Rec-Plex have set the stage for an exciting showdown.  State records, ties, and close races were the name of the game today in the circle-seeded heats, almost as though these kids had planned to turn up the tension for the final session as high as they could take it.

Preliminary results with splits are here.

Last year in the 200 medley relay, only two teams managed to finish below 1:38, with one of those being a state record 1:35.19 from Rockhurst.  This year, Rockhurst is not in the final, and five teams are already at 1:37.81 or better.  The top two teams, Cape Girardeau Central and Staley, are heading into finals with identical seed times at 1:36.94.

Eight of the nine individual events this year have the 2014 State Champion returning to defend their titles.  The 200 freestyle returns Kickapoo’s Samuel Senn, who broke the 1:40 barrier for the first time ever today to claim the top seed at 1:39.96.  He is followed closely though by Lee’s Summit North’s Liam Bresette (1:40.55) and Columbia Hickman’s John Ragsdell (1:40.59) who are both already faster than the second place time behind Senn last year.

Nick Alexander broke the first of his two State Records in the 200 IM, lowering the mark he set last year from 1:49.55 to 1:48.16.  The Mizzou commit from Vianney High School is on his own planet out there, with the next athlete behind him being Webb City’s Jacob Schultz, who dropped three full seconds from his seed time to finish at 1:52.63. Sam Drew from Lee’s Summit will be seeded third in the finals with 1:53.40.

Last year’s Champion in the 100 fly, Wyoming commit AJ Iseman from Rockhurst, was faster than his 2014 winning time in today’s prelim with 50.77, but will be the second seed in the 2015 final behind Webb City’s Jacob Schultz, who turned in 50.19.  Behind them are Max Goldenberg from MICDS at 51.26, and the top seed entering the meet Brogan Davis at 51.37.  If Jacob Schultz’ fly split on the Webb City medley relay is any sign, he may have more speed tomorrow.  He blazed a 21.95 split in a field that had no other butterfly legs below the 23 second mark.

It is interesting to note that Brogan Davis swam the prelim session in a brief, indicating that he he hasn’t quite shown his cards yet.  He will also be in the A-final of the 100 backstroke, and may shake up the stacked field of Chaminade’s TJ Halliburton, Rockhurst’s Iseman and Kirkwood’s Jack Wever who logged 51.94, 51.84 and 51.34 respectively.  Of course, the backstroke prelim was owned by Nick Alexander, who crushed the State Record of 49.51 set by Scott Jostes in 2006 with his prelim time of 49.38.

Samuel Senn sent a message in the 100 free prelim that he intends to keep his title, finishing over a second ahead of the rest of the field at 45.08.  It is worth noting that Sam Senn’s lead-off split on Kickapoo’s 200 free relay was 20.48, which is well ahead of any other competitor in the meet.  You can bet there are some sprinters right now who are thankful that Sam wanted to defend his 200 title rather than setting his sights on the sprint.

The 500 will feature Bresette as the top seed at 4:31.91, followed by Ragsdell at 4:32.84.  Both of those times are ahead of last year’s winning time by Collin Nill from Rockhurst.  Alex Tschopp from Columbia Rockbridge is the third seed at 4:34.48.

The 200 freestyle relay in 2014 boasted four teams under the 1:30 barrier in finals.  This year, eight teams have already gone under that mark in the prelim, led by the top two teams from last year again.  KC’s Park Hill returned three of the four from it’s winning 2014 squad and have already improved over their time by another tenth of a second, taking the top seed at 1:27.49.  They are followed by Rockhurst, also .06 below their runner-up time from last year at 1:28.50.

The breaststroke returns none of the top three from 2014, but already appears to be faster.  Sam Drew from Lee’s Summit leads the pack with 56.97, followed by Oak Park’s Elliot Eisele-Miller at 57.49.

Finals action begins at 9am CST with Diving.  Swimming finals start at 3pm and can be watched live at www.mshsaa.tv