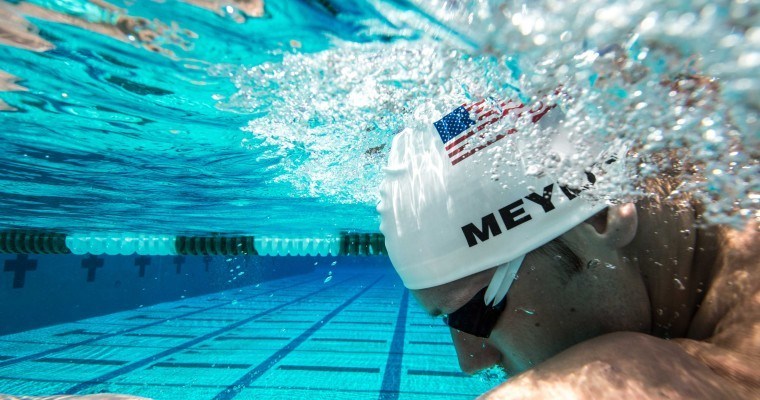 Alex Meyer of Tennessee Aquatics took the title in the men’s 5k race at the 2015 Open Water National Championships in Miromar Lakes, Florida securing his second straight win in the event.

After taking third place in the 10k race behind both Sean Ryan of Club Wolverine and Northwestern’s Jordan Wilimovsky, Meyer turned on the jets to win the shorter race ahead of teammate David Heron.

Meyer led a very tightly packed finish as he, Heron, and Andrew Gemmell of NCAP were all within approximately four-tenths of a second from each other. Meyer was first in 57:43.94, Heron second in 57:44.22, and Gemmell third in 57:44.39.

With that win Meyer secured his spot on the World Championships open water roster. His results mirror exactly what he did last year as he took bronze in the 10k and won the 5k at last year’s national championships.

Florida’s Arthur Frayler led the next wave of swimmers who were just behind the top three. Chip Peterson of the North Carolina Aquatic Club was fifth overall followed by Jacob Ores and Robert Finke.

Finke, at just 15-years-old, was the 18&under national champion. Finke grabbed the seventh place finish ahead of Brendan Casey. Casey was second in the 18&under category just behind Finke’s 57:51 with a 57:51.19.

It’s not all over for him. If the US does not place two in the top ten at worlds, then Meyer will get another shot at the last chance qualifier in 2016. This could be very possible considering the current US tack record in open water swimming. As of now, Meyer is the only one to have placed even in the top 10 for the US at a major international competition that’s not Pan Pacs (Gammell won the 10K there, but even he won’t have a chance to take a top 10 spot at worlds).

Really? Blaming coaching? He’s a pro. Can swim for whomever he wants. Chose UT. Heck, he likely has as much say in his training as anyone. He travels quite a bit so I imagine he’s training himself more often than not.