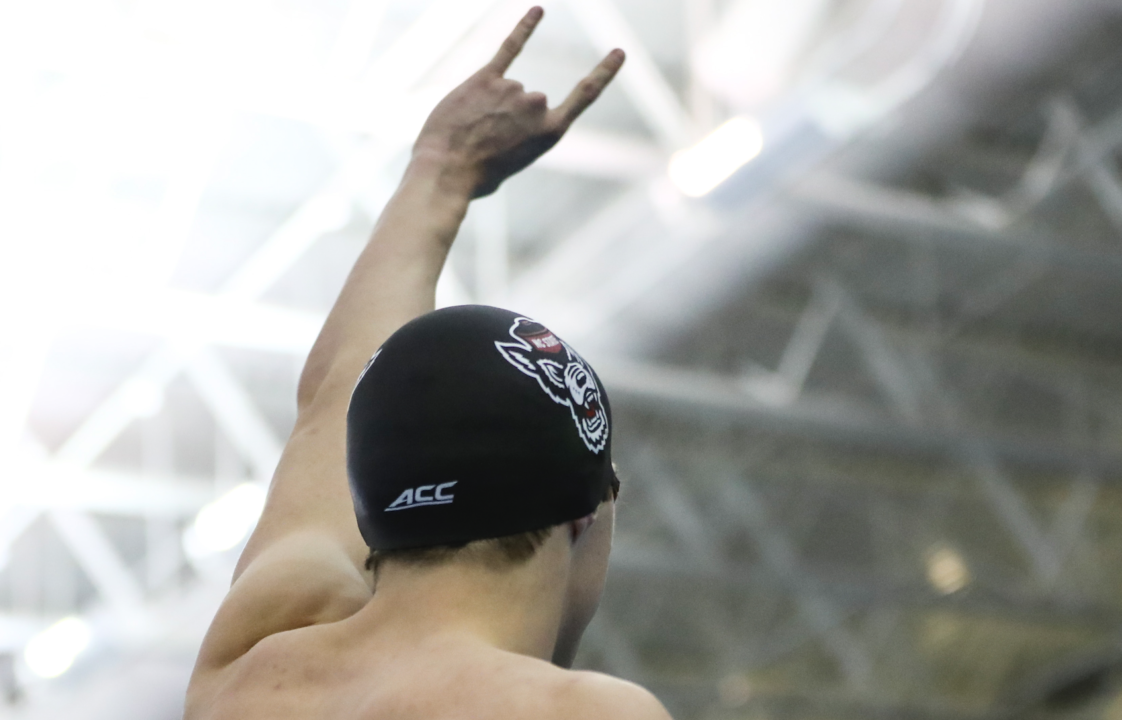 NC State had a strong morning on both the men's and women's sides. The men will look to expand their lead and the women will look to close the gap between UVA Current photo via (Photo by Jaylynn Nash, the ACC)

On the women’s side, the race was tight between Virginia and NC State going into day 3, but after day 4, Virginia has taken a solid lead. The Cavaliers expanded their lead from six to 100.5 from day 3 to day 4.

NC State put the most swimmers into tonight’s finals, as well as the most into the A finals. Based on the scored prelims, NC State has the potential to shrink the gap again between them and Virginia.

Although Duke had a solid lead for fourth place after day three, UNC had a strong morning and are projected to shrink that gap to only two points.

On the men’s side, NC State holds a commanding lead over Louisville through day three. Based on their prelims swims, they look to at least have the potential to hold that lead, or expand on it slightly. Both the top two teams placed the same number of swimmers into the A final. The biggest difference is that NC State has four in the B final whereas Louisville has 2 in the B and 2 in the C.

Virginia Tech and Virginia have been in a battle for third place, but based on the scored prelims, Virginia Tech looks to slightly expand on their lead.

The Pitt men had a big morning placing two swimmers into the A final of the 100 breast. They are currently projected to jump ahead of Notre Dame for eighth place.

If UVA women DQ a relay and / or Wenger is called for her dolphin kicks, the women’s battle could get very interesting.

Starting to look like UVa women & NCS women will be #1 & #2 at NCAAs. Would not have projected NCS in 2nd above Texas before this meet, but their depth is just crazy on the women’s side.

Cal men will need to show up in big next month for 2nd above NCS at that NCAA meet.

This is a big time swimming & diving conference now.

What are your thoughts on Stanford women??

And I don’t think Cal men need to worry about NCS.

I agree the Cal men have nothing to really worry about in relation to the Wolfpack men, I would even say they are just as big a factor to be in the hunt for the title. It is def not a cakewalk for the Texas Men to go unchallenged.

As for Stanford, they do have their olympic studs, but NCState’s depth in addition to their studs might carry them to 2nd place for a second year.

I think the Stanford women are the second best team talent wise in the NCAA, but I also now believe NCS depth on the women’s team is just too much. Stanford is a very top heavy team – 5 swimmers will score a ton of points in 3 events each. But the deflator is their medley relays might not be too 5, their 800 free relay might not either.

NCS has 5 Rocknrolla relays. They are running hot & it looks like their 6-16 swimmers at NCAAs will score a lot more than Stanford.

No disrespect to Stanford. They are a great team, but NCS will be a notch better next month I think.

So Stanford women are 4th at ncaas?

Finally, something for the Pitt Alums to cheer about. It’s been a long time.

One swimmer in how many years? I expect more from a program that has an established coach, excellent facility and plenty of funding.