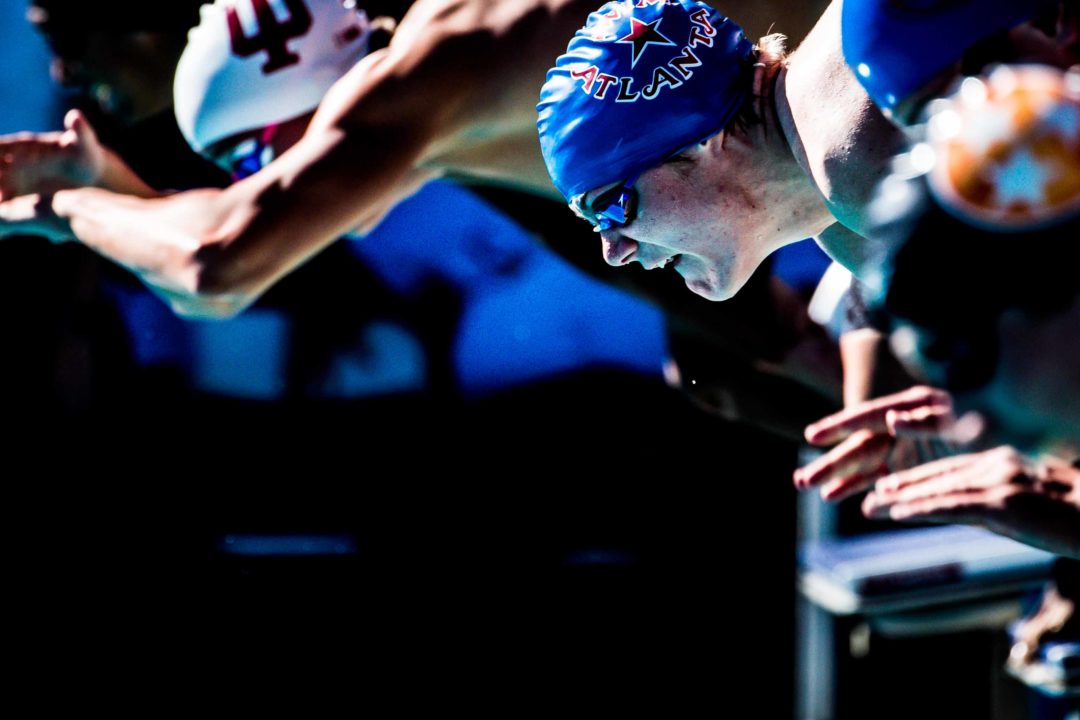 Some distance free battles between Georgia's Jake Magahey and Indiana's Jake Mitchell could be among the highlights of a strong East Junior meet. Archive photo via Jack Spitser/Spitser Photography

Last week it was the seniors. Now it’s the juniors who are up in twin Winter Championships meets on the East and West Coasts. Here are six swimmers to watch at the East edition:

The Atlanta prospect hit lifetime-bests in the 200, 500 and mile at this meet a year ago, most notably dropping from 4:16 to 4:14 in the 500. He’s got a shot at a Winter Junior Championships record this year – it currently stands at 4:14.40 from Jack LeVant in 2017, and Magahey was 4:14.61 a year ago. He could also improve his standing as the 11th-fastest 17-18 500 freestyler in USA Swimming history – the next three names ahead of him on the list are Drew Kibler, LeVant and Townley Haas.

15-year-old Claire Curzan won four medals at the 2019 World Junior Championships, and comes into this week’s meet as the top seed in no less than six individual events. The TAC Titan could be in line for multiple meet records, and could start closing in on 15-16 National Age Group (NAG) records after leaving the 13-14s with three short course NAGs.

NAG records are on high alert:

In fact, Curzan’s 13-14 NAG in the 100 fly is currently faster than the 15-16 NAG. The backstrokes and 200 fly will be a little tougher (someone named Regan Smith owns all three 15-16 NAGs), but Curzan could realistically come out of this week with 6 wins and 3 NAG records.

It’d be hard to preview this meet without mentioning Carson Foster, the longtime age group standout who is just wrapping up his final year of high school. The Texas commit swam the senior-level U.S. Open last week in meters, but is also entered in a bunch of yards races in his final Juniors. Foster is entered in the 200 IM, 400 IM, 500 free, 200 free, 200 back and 200 fly, though he could scratch a few of those races to focus on others.

The 17-18 NAG records in those events are pretty ridiculous, but here are a few to keep an eye on:

Carmel’s Jake Mitchell was one of the breakout stars of last summer, surging his way onto the World Juniors team with some massive time drops. A few of those notable drops from January 2019 through August 2019:

Just repeating that 100 free time would move him to #17 in the 17-18 group, and he could join rare company as a 42-second high school sprinter with a time drop. Chaney is also chasing the 50 free ranks, where three 17-18 boys have broken 19 seconds (Caeleb Dressel, Ryan Hoffer, and Michael Andrew), but no one else has broken 19.3.

Chaney has also been an oustanding relay swimmer over his career, and maybe the biggest fireworks will be seeing if he can split 18 or 42-low on some of the Mason Manta Rays loaded relays.