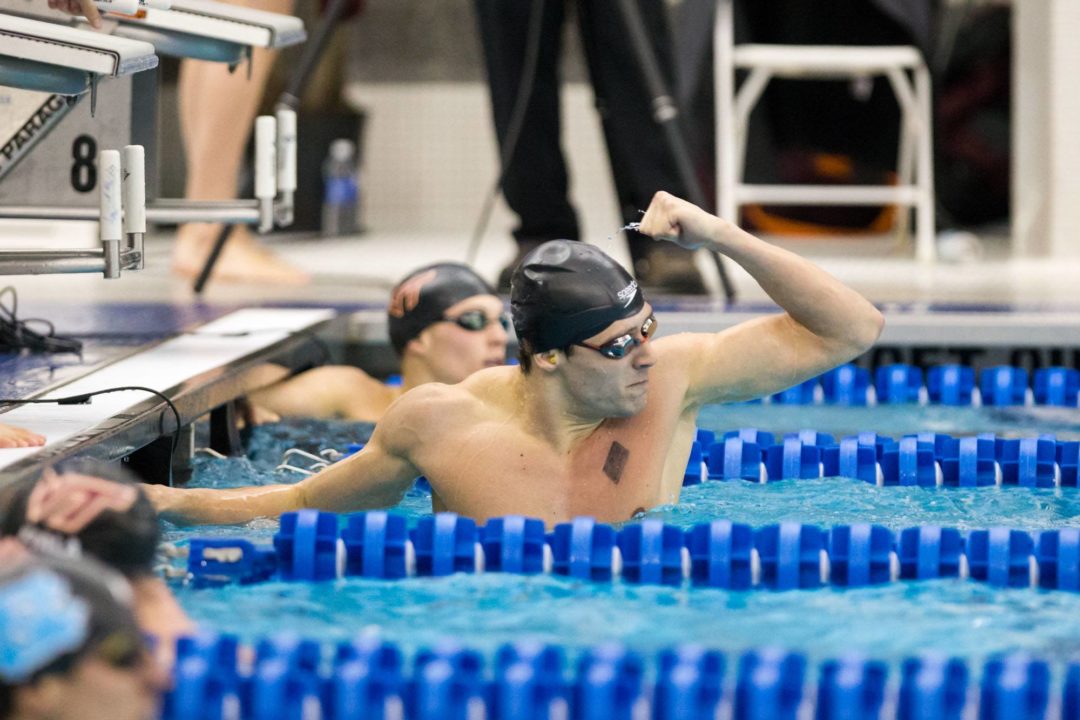 Stephen Coetzer (pictured) and NC State are on a roll, and showing they're far from a one-dimensional program. That and more in tonight's 5 Big Things. Archive photo via Tim Binning/TheSwimPictures.com

Day 2 of the 2015 men’s ACC Championships has wrapped up in Atlanta. Here’s 5 big things we noticed on day 2:

1. Yet another explosion from Bilis & the Pack: It’s almost a given nowadays that NC State will pull out some sort of relay magic at the conference championship, yet it still catches us all by surprise. Tonight’s fireworks came in the 200 free relay, where the Wolfpack dropped their name into the NCAA title hat with an astounding 1:15.62 that broke meet and conference records. That relay was swinging for the fences from the first leg, with junior Simonas Bilis crushing the 19-second barrier for the first time in his career on the leadoff split (18.98). That was the biggest hurdle keeping NC State back from an entirely sub-19 relay this season, with David Williams blowing up an 18.5 anchor and freshman Ryan Held going 18.9 on his split. The team only needs another tenth out of Andreas Schiellerup (19.1) to do it, and if they can find another half-second, they could be national champions.

2. A wild 200 IM ride: One of the great things about IM races are the constant changes in momentum. As various swimmers hit their strong and weak strokes, the running order can alter drastically. Tonight’s 200 IM was as good an example as it gets. Every single swimmer in the A final took out their fly leg between 22.2 and 22.7, with Louisville’s Josh Quallen leading NC State’s Christian McCurdy at the top. Backstroke thew the whole order into jumble, with NC State’s Stephen Coetzer suddenly leading McCurdy by .08. The breaststroke was almost total upheaval, with Louisville’s Nolan Tesone surging to the lead and Virginia Tech’s Brandon Fiala just a tick behind. And then the freestyle was its own mini-battle, with Fiala overtaking Tesone, but then nearly losing his lead to a charging Coetzer while NC State’s Soeren Dahl all of a sudden got into the mix.

If you’re confused, you’re not alone. The race ultimately ended in a Fiala touchout of both Coetzer and Dahl. In terms of close competition, that was perhaps the show of the night, with 6 of the 8 A finalists leading the field or sitting just barely off the pace at some point during the race. That’s what swimming’s all about!

3. UNC hanging in: Heading into the meet, things were looking like a possible team battle between NC State and Virginia Tech, with Louisville a sort of ‘wild card’ third contender. But the North Carolina Tar Heels have impressed so far, hanging right in the hunt with the top three and actually sitting second at the end of tonight with all diving scores included. (A bit of confusion: all diving events took place last week during the women’s ACC meet. Meet Mobile is showing team scores with all 3 diving events already included, while live results are factoring in each diving event as we reach its placeholder in the in the meet. We’re mostly referring to the scores with all three events included, to give the most up-to-date picture of the team race). UNC has had some outstanding swims so far, but probably none has been bigger than freshman Henry Campbell‘s 4:17.27 in the 500 free. Campbell cut three seconds off his lifetime-best today and is a suprise NCAA-invite hopeful for the Heels after beating last year’s “invited time.” UNC also got a big boost by taking second in the 200 free relay with a pair of 19-low splits.

4. Just a sprint program? NC State has developed a reputation as a sprint factory – heck, when you go 1:15.6 with an 18.9 leadoff in the 200 free relay, that’s only natural. But the Wolfpack’s first big statement today was that it’s more than just a distance program. Danish freshman Anton Ipsen won the team’s first ACC title in the 500 free since 1985, ending a 30-year distance drought with a 4:13.67 that was completely unmatched by any other swimmer. Maybe most impressive was that Ipsen did his biggest damage in the back half, only leading Louisville’s Trevor Carroll by a tenth at the 200 but expanding that lead to eight tenths at the 400 and eventually 2.2 seconds at the final touch.

5. A good showing for the home team: Georgia Tech doesn’t have the firepower to contend with the NC States or Virginia Techs as a team, but the Yellow Jackets turned in a pretty nice showing from their top-end swimmers in front of the home crowd on day 1. Andrew Kosic is the team’s cornerstone, a senior sprinter who’s become the rock the program has built its relays on. Kosic was 3rd overall in the 50 free, a time that should put him 5th in the nation, pending the results of the other conference meets this weekend. Georgia Tech also got an A final appearance out of Yuval Safra, who took 7th in the 500 free. The team currently sits 7th, only about 50 back of Florida State and Louisville.

other story – what happened to UVA, they have nothing really. At this point, will they have any relays qualify for NCAAs and any individuals besides Kaesar?

They’ll be lucky if they get any swimming points at NCAAs just like last year.

It’ll be interesting to see how long Augie lasts in Hooville.

To his credit, Augie has recruited and he and staff have coached up the women’s program to an excellent level. The men’s side is a debacle. Just a couple years ago the UVA men looked poised to be fixtures at a top ACC and NCAA level. Now they are below non-funded programs in the conference tables. It would be best for all if UVa splits the program and get a men’s coach and staff. Successful two program coaches like Troy and formerly Bernardino are fast becoming a part of swimming history and not the future.