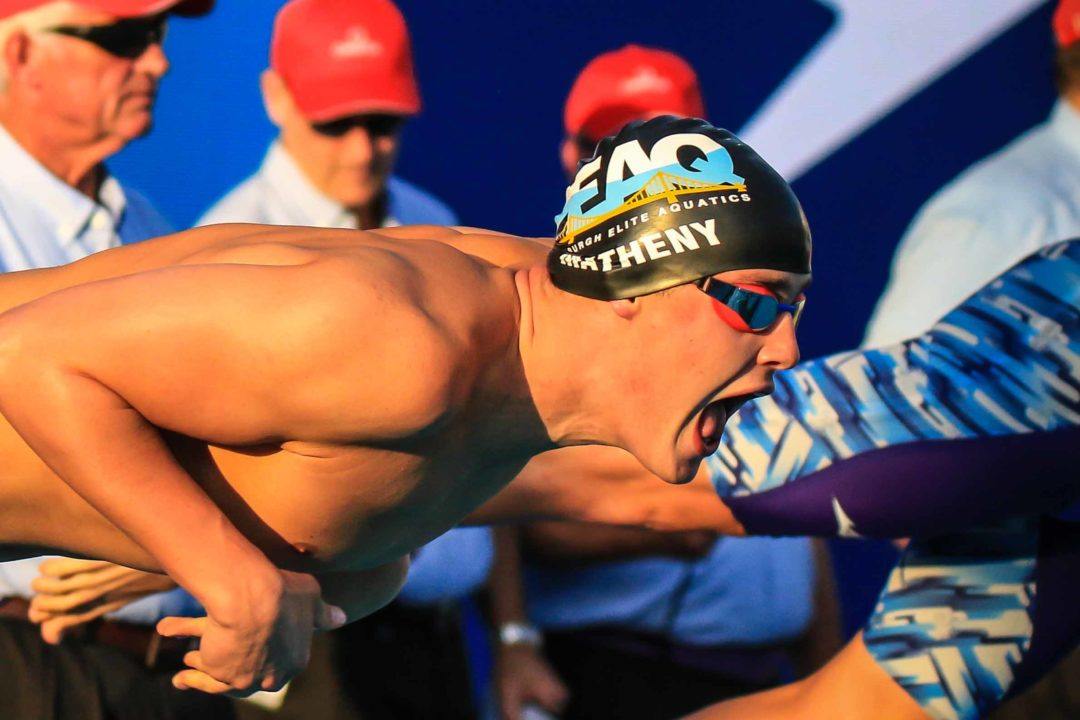 Josh Matheny won the men’s 200 breast with a new Championships Record of 2:09.40 on Day 4. His gold helped keep USA on top of the medal table. Archive photo via Jack Spitser/Spitser Photography

There were eight more gold, silver, and bronze medals handed out on Friday night in Budapest, with the United States earning a lion’s share of the spoils. USA’s Josh Matheny began the night with a surprise win in the men’s 200 breast breaking the Championships Record with 2:09.40. His teammate Torri Huske followed with surprise victory of her own in the next event, taking home gold in the 50 fly with 25.70. Justina Kozan scored another win for Team USA with a dominant 2:11.50 in the women’s 200 IM. The 4×200 free relay team of Jake Magahey, Luca Urlando, Jake Mitchell, and Carson Foster closed the night out with a fourth gold for the Americans and a new World Junior Record of 7:08.37 to boot.

Jan Cejka put the Czech Republic on the board with a gold medal in the men’s 50 back going 25.08. Evgenia Chikunova helped keep Russia in second place with a gold in the women’s 100 breast; her 1:06.93 was just .32 off the Championships Record.

Lani Pallister did break the Championships Record in the 400 free, though, and her 4:05.42 gold-medal performance moved of Australia from fifth to third place on the medal table.

Vladyslav Bukhov earned a gold medal for Ukraine with his 22.13 win in the men’s 50 free.

In addition to the Czech Republic and Ukraine, Belarus made its first appearance on the medal table with a silver medal from Anastasiya Shkurdai in the 50 fly (25.77).

More dominant than even the senior team

Except Canada and Australia have a tenth of the population. Those two countries are doing quite well