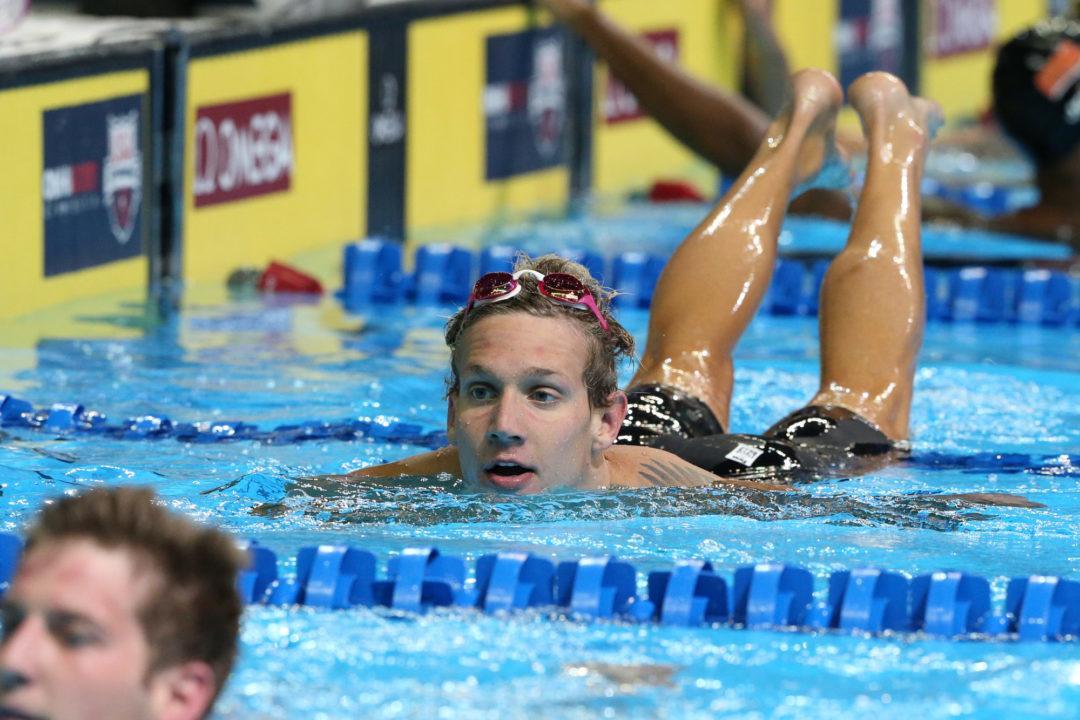 On day 4 of the 2016 Rio Olympic Games, former Bolles Sharks teammates Caeleb Dressel, Joseph Schooling, and Santo Condorelli all qualified for the semifinals of the men's 100 free. Archive photo via Tim Binning/TheSwimPictures.com

On day 4 of the 2016 Rio Olympic Games, the men’s 100 free saw 3 former teammates from the Bolles School Sharks all qualify for the semifinals in the men’s 100 free: Caeleb Dressel, Joseph Schooling, and Santo Condorelli. All 3 swimmers were ranked in the top 8 after the heats.

Dressel, the fastest of the group this morning, swam under 48 seconds for the first time to qualify as 2nd seed in 47.91. Dressel was primarily coached by Jason Calanog at Bolles as he swam on the club team, but didn’t attend the school. He’s been rising in the ranks since becoming the first high school swimmer to ever break 19 seconds in the 50 free, and is now a junior at the University of Florida. This past season, he rewrote the American Record books in the 50 and 100 yard freestyles.

Earlier in the meet, Dressel was a part of Team USA’s 4×100 free relay, which saw him lead off in 48.10 to help the Americans to Olympic gold. That 48.10 was his personal best coming into this morning.

Schooling is typically known for his butterfly talent, but he also owns the Singapore National Record in this event. He broke his own record in prelims, lowering his previous mark of 48.58 from the 2015 Southeast Asian Games. Earlier this year, Schooling set NCAA Records with wins in the 100 and 200 fly as a member of the NCAA champion Texas Longhorns squad.

Condorelli, who swam for USC Trojans collegiately, took a redshirt year to prepare for this Olympics. Though he formerly represented Team USA as a member of the National Junior Team, Condorelli declared his Canadian sporting citizenship in April of 2015. Since then, he’s swum under the 48 mark in the 100 free, posting a 47.98 at last summer’s Pan American Games.

Conderelli is primarily a sprint freestyler, but he’s also found success in the 100 fly. This season, he broke his first Canadian National Record in that event, posting a 51.98 at the Arena Pro Swim in Indianapolis.

Along with Murphy they had some pretty good high school relays at Bolles.

Those losers didn’t have anyone in the 100 breast. I am unimpressed

Vote Up2-2Vote Down Reply
Who dude

and no one is touching those 4 in the two sprint free relays.. would be interesting to see them vs texas (conger, haas and smith) in the 800 free relay (they obviously would need someone to replace schooling)

I was just messing around, I am not unimpressed with them they are all swimming lights out.

Who is the 4th swimmer for Texas with schooling going over to the bolles side?

Schooling was the anchor on that record breaking relay at NCAAs

What I am getting at is they have some options.

And not one of those guys could get points in the diving events.

For those of you in need of the diving Illuminati sect punishment for our sons, tune into NBC earlier tonite.

They had good breaststrokers too, they might not have been as fast as their sprint freestylers but they were fast.

I could name a few of the breaststrokers too! But the intial comment was really just a joke

Is Bolles as good as it was before? (when Dressel, Schooling, Condorelli, And Murphy swam there)

bolles was good before them.. Gregg troy coached there 77-97.. the team has won state titles consecutively for the last 20+ years on both the boys and girls sides

Murphy, Schooling Santo, Dressel, all at the same time is unreal talent. Theyre still good, but they arent as good as a few years ago

I believe Bolles held the national independent HS record in the 400 Free Relay back in the late 80’s/early 90’s.
If it wasn’t sub 3:00 it was pretty close.

CBC showed it this morning during the prelims!