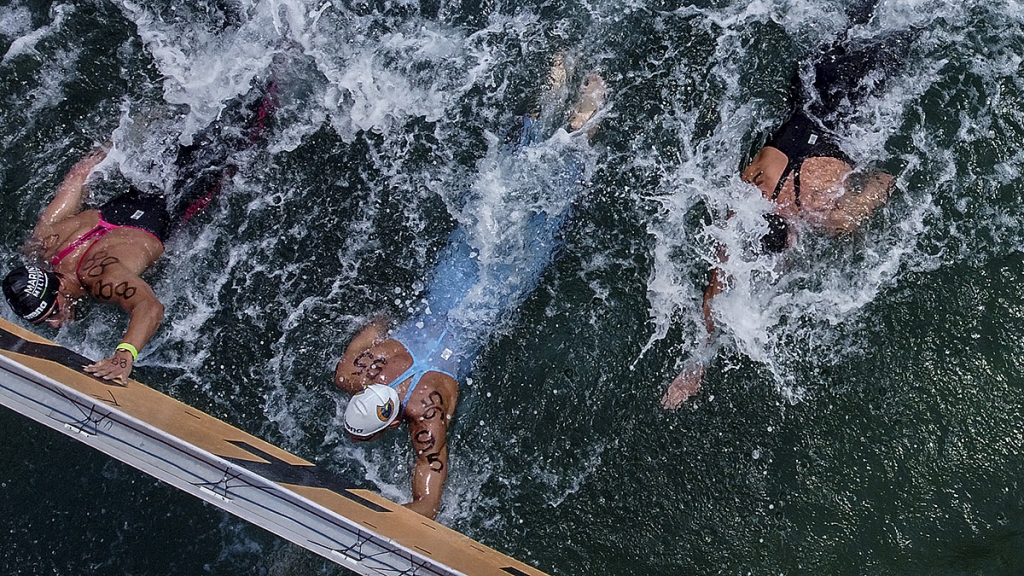 The U.S and Hungary earned gold in the mixed 4x1500 relays on the final day of the 2022 FINA World Junior Open Water Championships. Stock photo via Andrea Masini Deepbluemedia

The final day of the 2022 FINA World Junior Open Water championships featured the mixed 4×1500 relays, which were divided into the 14-16 and 17-18 age groups. FINA livestreamed both events, which are available at to watch at the links below.

It was Italy that lead the way through the first half of the race, thanks to strong performances by Davide Grossi and Guglielmo Lombardo.

However, Nathan Szobota and Sam Marsteiner turned in stellar legs, keeping the U.S solidly in second place and not too far behind the Italians. Both Italy and the U.S. elected to go boy-boy-girl-girl for their relay order.

Earlier races divided swimmers into 14-15 and 16-17 age groups, but this mixed relay extending their age range to include the 16-year-olds as well. That allowed the U.S to put Katie Grimes and Claire Weinstein together on the back half of the relay, each of whom had won gold in their individual open water race earlier in the meet. Grimes won the girls’ 7.5K by over two minutes, while Weinstein took gold in the 5K.

The Grimes-Weinstein duo proved unstoppable, as Grimes overtook Italy’s Ludovica Terlizzi on the third leg of the relay. Once that pass was made, the U.S kept the lead all the way to the finish.

There was an interesting battle for silver, which largely came down to strategy. Mexico opted to go boy-girl-boy-girl, so they yoyo-ed from second, to sixth, to third heading into the final lap. Turkey was running third, with Egypt fourth, and Germany fifth. Both Germany and Turkey had boys–Arne Schubert and Emir Batur Albayrak— as their final swimmers. That proved to be the difference maker, as they both passed Italy and were close together heading into the finish. Schubert touched less than three seconds ahead of Albayrak, securing silver for Germany, while Turkey earned bronze.

The 17-18 race was not as close as the 14-16 race, as each of the podium finishers finished distinctly separate from each other, and Italy finished about 20 seconds ahead of the U.S for the bronze medal.

Hungary swept the 10K races on the previous day of competition, which gave them a huge advantage on this relay, as both Bettina Fabian and David Betlehem suited up once again. Hungary opted to go girl-girl-boy-boy on the relay, leading off with 10K bronze medalist Mira Szimcsak.

Italy and Mexico both started off with boys, and were the top two teams heading into the first exchange thanks to Giuseppe Ilario and Maximiliano Vega Cuevas. Interestingly, they were the only two of the top eight teams to lead off with boys, a big shift from the 14-16 mixed relay. Italy distanced themselves on the second leg of the race, with Canada, Hungary, U.S., and Mexico in a group chasing.

On the third lap, Hungary made its move, surpassing the Italians and taking over the lead. After the final exchange, it was Hungary in the lead, with Italy in second and Germany running third ahead of the U.S.

With Betlehem in the water, Hungary earned gold comfortably, a minute and 33 seconds ahead of Germany. Once again, Germany opted for a boy on the final leg and Italy a girl, which proved to be the difference maker as Germany’s Noah Lerch passed Italy’s Iris Menchini to take the silver medal.

Katie Grimes was magisterial in the third leg of the mixed 4 x 1500 meter open water relay.