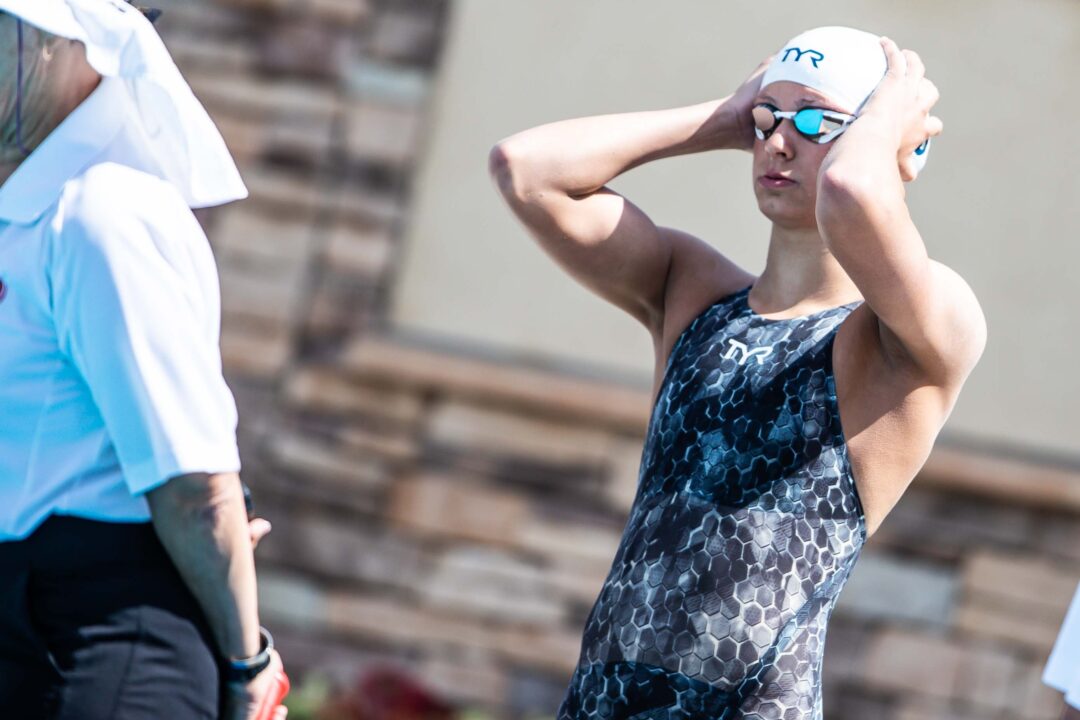 The first day of the 2022 World Junior Open Water Swimming Championships is in the books. Competing at Mahé, an island in Seychelles, young open water swimmers competed in the girls and boys 5k and 7.5k today. The 5k was for swimmers aged 13-15, while the 7.5k featured 15-17s. Tomorrow we will see the girls and boys 10k competition, which is for swimmer aged 17 to 19.

It was rising American freestyle star Claire Weinstein who won gold in the girls 5k on the opening day of the championships. It was a very tight race between the 15-year-old Weinstein and 15-yeaar-old Tuna Erdogan from Turkey at end, seeing Weinstein finish in 51:52.40 to Erdogan’s 51:56.80. Spain had a strong showing as well, with 14-year-old Noa Martin winning bronze in 52:05.90 and 15-year-old Carolina Oliveira finishing fourth in 52:32.60.

Notably, Martin is only 14 years old, making her the youngest medalist of the day.

For Weinstein, the win marks her first World Junior medal in an open water or pool event. The 15-year-old swam at the LC World Championships in June, competing on the USA women’s 4×200 free relay. In a display of her prowess in the pool, Weinstein led the American team off in 1:56.71, helping them to a gold medal.

Like Spain in the girls 5k, Germany had a strong showing here, with 15-year-old David Kuhn finishing fourth in 48:53.70, less than four seconds behind the winner.

Only ten seconds separated first from seventh in the race, with Turkish 15-year-old Emir Albayrak taking seventh in 49:00.70.

There were three 13-year-olds in the field this morning, all performing admirably despite the disadvantage in age. Santiago Villanueva out of Venezuela took 16th in the race, finishing in 51:30.70, less than three minutes off what it took to medal. India’s Dharshan Shashikumar was 28th (54:23.10), while Malaysia’s Aslan Adnan was 29th (56:57.80).

It was a clean sweep for the U.S. in the girls races today, with Katie Grimes posting a dominant victory in the girls 7.5k. The 16-year-old, who is teammates with Weinstein at the Sandpipers of Nevada in Las Vegas, swam a 1:22.38.50, finishing well over two minutes ahead of silver medalist Narin Burcunaz of Turkey (1:24:57.40). Burcunaz, who is just 15, finished a little over a second ahead of bronze medalist Lia Csulaki out of Hungary (1:24.58.90).

Like Weinstein, Grimes also had a phenomenal performance at the World Championships this summer, winning a pair of silver medals. She took second in the 1500 free and 400 IM at those championships, winning her first senior international medals. Grimes also notably competed at the Tokyo 2020 Olympics last summer when she was 15, finishing fourth in the women’s 800 free, just off the podium.

Hungary had the best team performance of the day, winning gold and bronze in the boys 7.5k. Hunor Kovacs-Seres won the race by a significant margin, finishing in 1:16:02.10, which was 18 seconds faster than silver medalist Paulo Delgado from Mexico. Delgado beat out Hungary’s Mate Hartmann by 0.10 seconds, finishing in 1:16:20.50 to Hartmann’s 1:16:20.60.

Germany’s Linus Schwedler, who competed at the European Championship in open water this summer, was just off the podium, taking fourth in 1:16:20.90, just 0.30 seconds behind Hartmann. Japan’s Kaito Tsujimori (1:16:21.60) and Brazil’s Matheus Melecchi (1:16:22.80) were right in the thick of it as well, finishing fifth and sixth respectively.

You can tell Grimes is already a veteran of the podium protocol. She knew to shake hands with the other two medalists prior to the anthem, and then ask both of them to join her on the top step for a photo op after the anthem. Weinstein needs some work. The Turkish girl looked in that direction, obviously expecting to be asked to the top. Instead Weinstein jumped down and whisked away.

I’ve rarely seen the athletes bring their flags to the podium but it happened several times here.

I would have thought this was common knowledge amongst swimmers.(what to do).

I hope that guy on the backboard is ok

Claire Stulmacher had a bit of a breakout swim if you ask me. Getting 4th in the world in the 7.5K is something so incredibly amazing, and considering she was relatively unknown on the open water scene until now. The future is bright for her. Congrats to USA men and woman on an amazing first day!

No Szobota in the headline? Do better.

did someone just walk around camera and shot “stuff”

It would be nice for open water meet reports to add to the list:
air temperature
water temperature
terrain (just kidding!)
wave heights.

I guess for the Seychelles, the water is not too hard to predict:

Highly recommend the race videos (found on the FINA website). Knowledgeable and unobtrusive commentator (unlike most pool events), beautiful setting. It was interesting to see the ‘getting things organized’ prior to the 5k. There’s a shot during this pre-race period showing the bay and hills, the shot continues as the drone returns to the beach, becoming a close up of some broadcast crew members smiling indulgently at the drone, and finally the shot ends with the view from the drone on a towel viewing across sand to the start area. Reminds me of the famous seven minute shot Antonioni used to conclude his film The Passenger.

Superb results for TEAM USA — congrats to them, and to all the competitors who put in the hours, the work, and the true grit to compete at the top level!