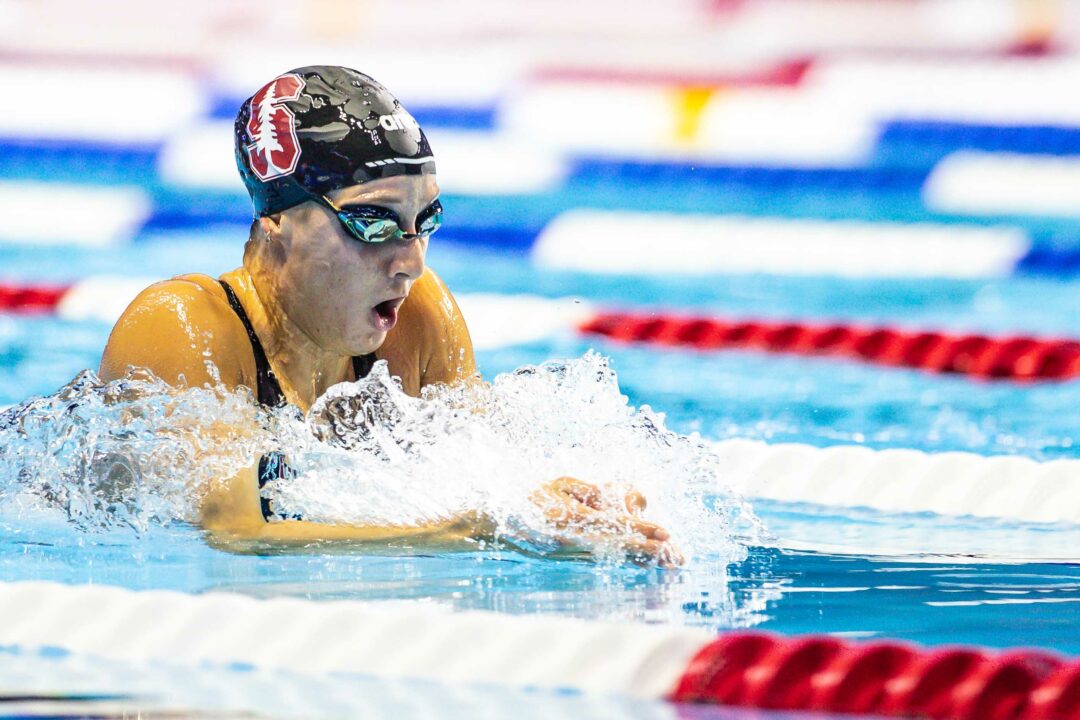 Brooke Forde qualified first into tonight's 400 IM final at Pac-12s, one of 10 Cardinal swims that moved through to the top eight in the prelims. Archive photo via Jack Spitser/Spitser Photography

Before getting into the prelim numbers, here’s a look at how the team scores currently stand after Thursday night’s events at Pac-12s:

Stanford had a strong showing in the pool last night, but really gained ground on their rivals on the boards, scoring 109 points in the women’s 3-meter diving event as they finished Day 2 up by 99 on the USC Trojans. Meanwhile, defending champion Cal, who don’t have any divers, find themselves well back in third.

The Cardinal had another strong prelim session on Friday, putting 11 swimmers into ‘A’ finals and seven more into consols. The team holds the top seed in three of the five events that were contested, including a pair of 1-2 showings in the 100 fly and 100 back.

Freshman Regan Smith sits first in both of those events, while fellow first-year Torri Huske and junior Taylor Ruck sit second in the 100 fly and 100 back, respectively. Lucie Nordmann and Alex Crisera also advanced to the 100 back ‘A’ final to make half of tonight’s championship heat made up of Cardinal swimmers.

In the 400 IM, Stanford’s fifth-year senior Brooke Forde was the top qualifier by more than five seconds, setting her up to take a run at a third-straight title tonight.

Cal followed by putting 10 women ‘up’ and 23 total into second swims tonight, including four through to the ‘A’ final of the 200 free and three in the 400 IM.

Based on this morning’s swimming events, the Bears are projected to move past USC into second in the team race, but the Trojan divers might have something to say about that.

USC had seven swimmers advance through to ‘A’ finals, with two of those being #1 seeds in the form of Laticia Transom (200 free) and Kaitlyn Dobler (100 breast). Isabelle Odgers also sits second in the 100 breast to give the Trojans a 1-2 qualification in that race.

Who is on full taper?

0
0
Reply
show me your data

Stanford added 68 points from diving day 3 USC added even more. Cal still at zero. USC swimming will be far below Stanford and Cal tonight. So the gap grows its a 2 team race in the final day, .Boy, will the 100Fly be fascinating Fri nite. Huske and Smith turning it loose.

Rough day for ASU. Looks like only one of thirteen swimmers would made the bonus heat or better improved their seed times.

They went from not showing up last year all the way to 6th place. On the other hand, the Trojans have really turned it around in a year I’m somewhat impressed.