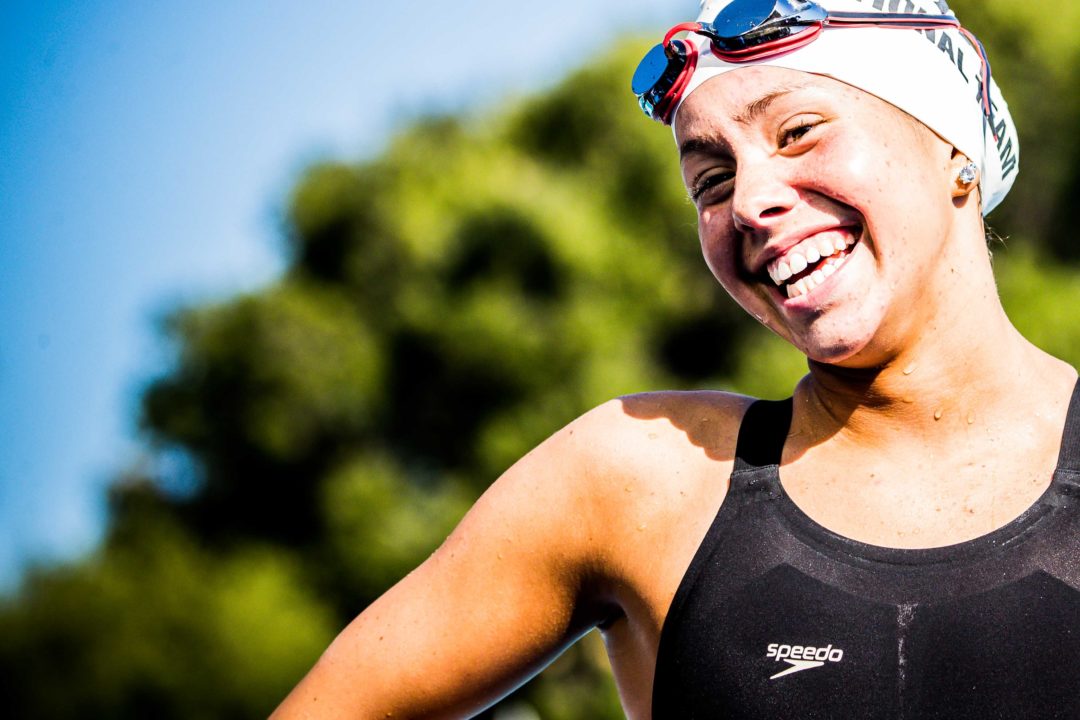 Indiana sophomore Anna Peplowski (pictured) was a double-event winner tonight, taking first in the 200 free and 100 back.

The Texas Longhorns have taken over the No. 1 spot for both men and women in the November edition of the CSCAA dual meet rankings

Kentucky’s Kaitlynn Wheeler (pictured) posted the top time of the morning in the 500 free with a new personal best of 4:41.49.

The Ivy League will hold its first championship in two years after canceling the entire swimming and diving season last year due to the COVID-19 pandemic, and this year’s championships will carry a host of storylines.

One of the biggest storylines in all of college swimming this season has been Penn senior Lia Thomas, a transgender swimmer who competes in freestyle events for the Quakers. Despite a flurry of activity and potential rule changes, the Ivy League recently announced that Thomas would be eligible to compete at the Championships.

On the team side, historic rivals Harvard and Princeton seem poised to battle once again. Harvard won both the 2018 and 2019 Ivy titles, but Princeton took back the crown in 2020, their first since 2015. The two schools have won all but one (Yale, 2017) of the Ivy League titles since 2000.

The meet will kick off at night on Wednesday, February 16th with the 800 free relay and 200 medley relay and then will continue with prelim/final sessions on Thursday, Friday and Saturday.

Reznicek is the clear star for this group, as she holds the top time in the Ivy League this year in the 100 back, 4th fastest in the 100 fly and 8th fastest in the 200 back. Barrett is one of the top distance swimmers in the league, currently sitting with the fourth fastest 1650 at 16:46, while Chidley projects to challenge for A final spots in both butterfly races.

The Big Red are led by junior Melissa Parker, who sits on the edge of A finals in the 50, 100 and 200 free. Her teammate Priscilla Wongso is also projected to score in the B final of both the 50 and 100, while Allison Chang holds the Ivy’s 7th fastest 200 breast this year.

In their first year back in competition after facing the chopping block, Dartmouth is in rebuilding mode under new head coach Jesse Moore. Leko is the clear star and should challenge for the A final in both the 100 and 200 fly. Minnigh is the only other Dartmouth swimmer currently projected to score more than 10 individual points, courtesy of her 1650 free.

The Crimson’s potential title run will be led by superstar senior Felicia Pasadyn, who won the high point swimmer of the meet in 2020 after winning the 200 IM, 200 back, 400 IM and winning all four relays in which she swam. She will be joined by a youth movement, with freshmen Erin Cavanaigh, Abigail Carr and Aleksandra Denisenko all projected to score north of 70 individual points. Addie Rose Bullock should hold down the sprint duties for the Crimson, the comparative “weak” spot in Harvard’s lineup.

Thomas is the clear-cut favorite in the 200, 500 and 1650 free and should win all three races handily, but there is plenty of talent on this Quaker roster that has been somewhat overlooked this season. A strong freshman class is led by Vanessa Chong, who projects to A final in the 200 IM and 200 fly and Isabella Pytel, who is the fourth-fastest Ivy 200 breaststroker this year. Distance freestyler Anna Kalandadze, who transferred to Penn from Cal, should be a force in both the 500 and 1650.

Princeton’s swimming roster is loaded with top end talent, with Venema and Marquardt among the favorites in their events. Christina Bradley also carries top three potential in both sprint sprint frees and the 100 fly. On the whole the Tigers carry significant sprint speed across all strokes, which should make them formidable in all 5 relays. Freshman Emily Appleton provides Princeton with great depth in the distance races behind Marquardt.

Hennig is the heavy favorite to sweep the sprint frees and single-handedly puts the Bulldogs in the title conversation in any relay he competes on. Massey currently holds the second fastest time in the Ivy League in both the 200 fly and 200 back, setting up a tough double on the meet’s final day. Ava Franks holds the top time in both breaststroke races, while Paoletti should challenge for the A final in both the 400 IM and 200 breast. Marykate Buckley gives Yale the league’s top breaststroke duo, holding the second fastest 100 and third fastest 200 time this season.

200 IM: The 200 IM projects to be the closest race of the meet, with the top three swimmers this year all coming in within 6 tenths of one another. Harvard All American Felicia Pasadyn currently holds the top time in the conference with her 2:00.20 from the Minnesota Invite. She is trailed closely by a pair of Princeton Tigers, with Liza Whitmire (2:00.54) and Jess Yeager (2:00.86) also coming in under the 2:01 barrier this season. Penn’s Vanessa Chong (2:01.41) and Harvard’s Aleksanda Denisenko (2:01.45) also sit within striking distance in the 4th and 5th seeds and are the only other swimmers who have been under 2:02 this season.

400 IM: The longer version of the IM also projects to be a tight race, though with a different cast of characters than the 200. Harvard’s Erin Cavanagh holds the league’s top time this season with her 4:13.69 from the Minnesota Invite, though Princeton’s Ellie Marquardt is in hot pursuit with her 4:13.99 from the Big Al Open. The pair are nearly four seconds ahead of the field, so the two seemed primed for a head to head showdown.

100 free: Leading the 100 free is Yale’s Izzi Henig, a transgender swimmer whose story was feauted in the New York Times over the summer, whose time of 48.03 currently sits 10th in the NCAA. The field is extremely tight behind Henig, with Princeton’s Nikki Venema, Yale’s Ophelia Pinkinton, Princeton’s Christina Bradley, Penn’s Margot Kaczorowski and Princeton’s Amelia Liu all sitting between 49.67 and 50.11. The sprints are Harvard’s clear weakness, with their top swimmer, Addie Rose Bullock, holding the 8th fastest time in the conference with a 50.68.

In a projected tight meet like this, it often comes down to two factors: prelim finishes and diving. While predicting who finishes 8th vs. 9th or 16th vs. 17th is nearly impossible, Harvard clearly has the stronger diving program. At the annual Harvard-Yale-Princeton meet, Harvard went 1-2 on the 1 meter and 1-3-4 on the 3 meter, well ahead of all of Princeton’s divers. While Princeton certainly has the star power in the pool to hang with Harvard, The Crimson’s advantage on the boards may prove to be insurmountable.

The battle for third should be tight as well, with Henig providing a massive relay boost for Yale and Thomas a virtual lock to three individual events for Penn.

What is the deal with all the kids who took a year off? Somehow Covid was harder on the IVY kids and they need to repeat a year? It’s ridiculous to see kids who were sophomores last year listed as sophomores this year and juniors twice as well when they took a year to travel or whatever. Kuddos to the kids who soldiered thru and met Covid head on and stayed strong!

The Ivy League didn’t have any sports last year. Literally everyone mentioned in this article took the year off.

Student-athlete. Did the schools also not have academics?

It seems clear to me that you have a very specific bone to pick, but it’s not entirely clear to me what it is. If you could just be direct and share what your complaint is, I could help you address it.

In athletics, students are described based on their athletic eligibility, not based on where they are academically. There are lots of college athletes who are classified as sophomores academically by the second semester of their freshman year, but we still don’t call them sophomores when we’re talking about sports.

Probably 40% of these kids went out to Coronado to “train”. I am using “train” in the loosest sense there possibly is at least with regards to swimming as the CSC Collegiate group was essentially an extended spring break.

The kids who could afford staying out there for a full year did. The ones that couldn’t went to school remotely for the first semester and were actually on campus second semester.

Is there a more homogenous, less interesting conference meet? The only thing that makes this meet even potentially watchable is Lia Thomas’ situation ie how will kids who have been handed more or less every advantage possible in this life respond to something mom and dad or… Read more »

I have a feeling that a lot of those kids didn’t take the year off because of swimming, and probably because their schools were m remote all of last year and didn’t let their students live on campus in many cases. Their lives don’t just revolve around swimming in the Ivy League

Not surprised to see you ranked Dartmouth last, considering they are the only team coming into ivies without a suited or tapered meet this season. Psych sheet is not represented of the gains they have made since being cut…

Princeton by a milly

Check the parameters on your Swimulator. Mine has Harvard by 1 million points

No showdown races in thomas’ events, bc yknow, it won’t be close or fair

“Lia Thomas will take away attention from all the cis women”

*Proceeds to only focus on Lia Thomas