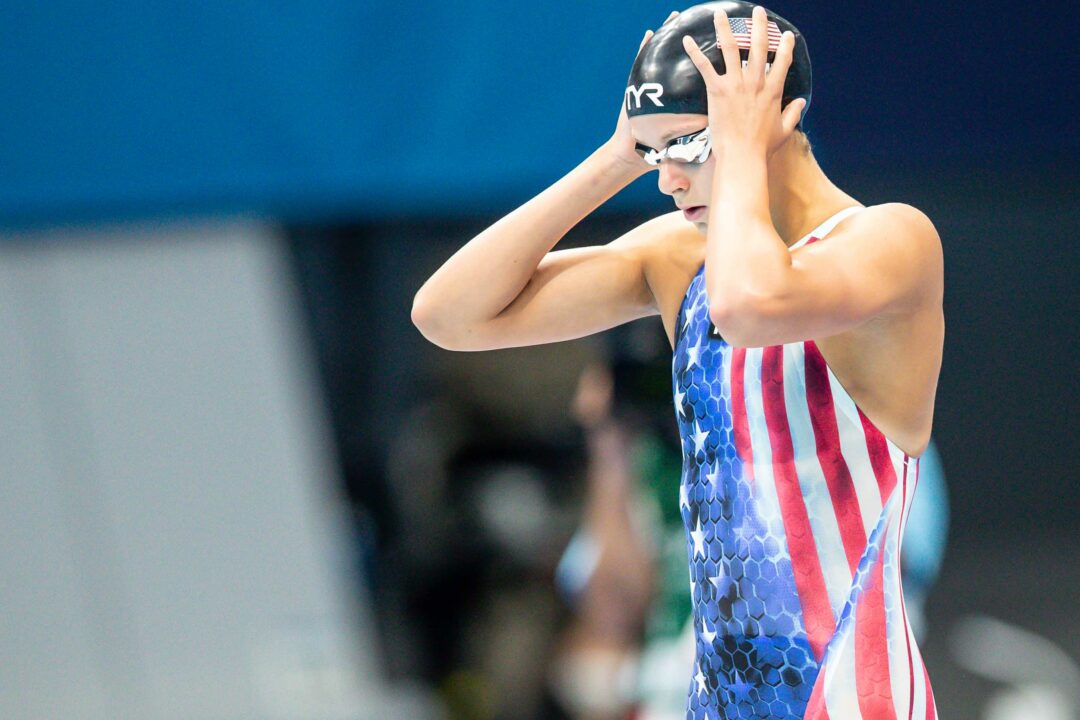 Katie Grimes is one of multiple 2021 Olympians swimming at Open Water Nationals this weekend and trying to qualify for the Worlds team. Archive photo via Jack Spitser/Spitser Photography

The U.S Open Water Nationals head to Fort Myers Beach, FL this weekend. Competition runs April 1-3. The event is the selection meet for representing the United State at the relocated World Championships this summer in Budapest, Hungary and World Junior Championships in Beau Vallon, Seychelles in September. The schedule of events is below. All start times are EST.

All the races will be swum in counter-clockwise loops, with large buoys set at each turn. For the 10K and 5K courses, the course will be 1.66K long, which makes the races six and three loops long, respectively. The 7.5K race will be 5 loops around a 1.5K long course.

The weekend kicks off with the women’s 10K, which features three 2021 pool U.S Olympians: Erica Sullivan, Katie Grimes, and Bella Sims. Erica Sullivan most recently swam at the Division I NCAA Championships, where she finished 3rd in the 500 free and 2nd in the 1650. Bella Sims raced yesterday in San Antonio at the TYR Pro Series. She scratched out of finals in both the 200 free and the 100 fly. Other names in the race to look out for are a pair of college freshmen, Indiana’s Mariah Denigan and University of Tennessee’s Summer Smith. Both raced at NCAAs along with Sullivan, finishing 18th and 22nd, respectively. There are also a trio of French swimmers in the race including Olympian and 10K two time World Champion Aurelie Muller.

Obviously, the French Nationals are not included in the selection for the U.S Worlds team. With the recent retirement of Olympian Hayley Anderson and Ashley Twitchell not entered in the meet, the race for the Worlds team is wide open.

Grimes and Sullivan are not entered in the 5K, but the rest of the athletes mentioned above are. Treasure Coast Aquatics’ Blair Stoneburg will be in the mix as well.

On the men’s side, there are also a number of international names, including swimmers from France, Sweden, Mexico, and the Netherlands. Those names are highlighted by Olympian Daniel Delgadillo, but look for back to back World Champion in the 25K Axel Reymond to be competitive as well.

For the Americans, the names to watch in both races will be Mission Viejo’s David Heron and brothers Brennan and Dylan Gravely. National team member in the 10K T.C Smith will be in the hunt as well.

Notably absent on the men’s side are Tokyo Olympians Jordan Wilimovsky and Michael Brinegar. Brinegar represented the U.S in the pool in the 800 and 1500 freestyles, but raced the 10K in the Las Vegas Open Water Champions Cup last October. He just competed at NCAAs, where he finished 6th in the 1650.

Grimes won the 10k in what looked like rough waters.