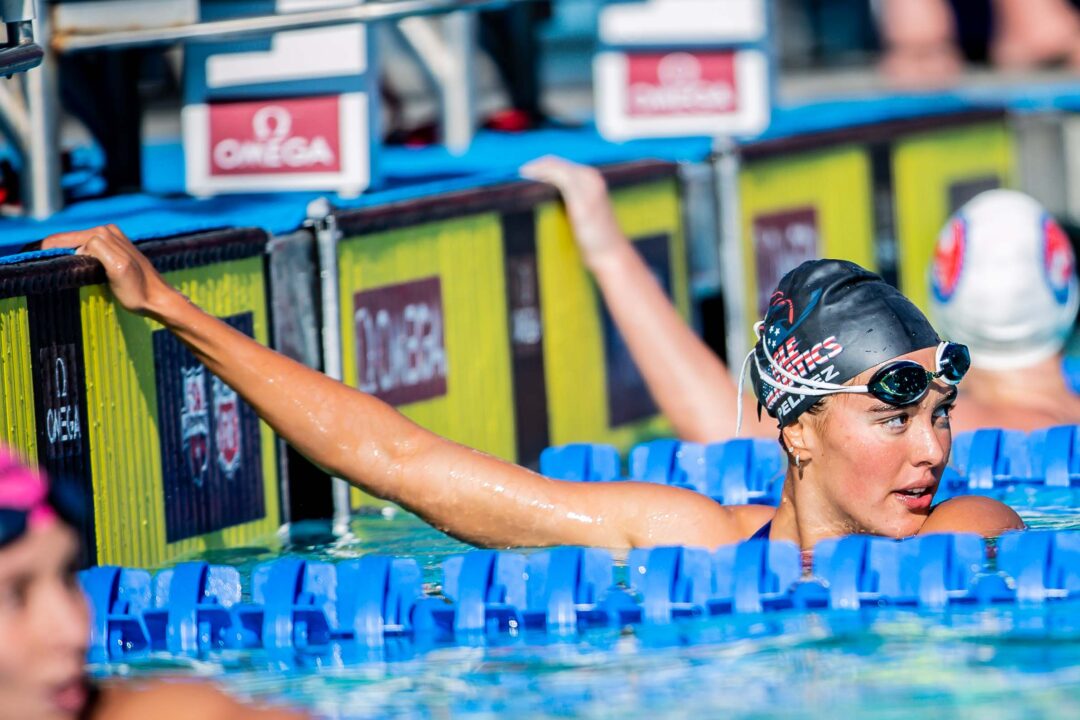 Erika Pelaez was among the top performers in the FHSAA Class 1A Regional meets as she prepares for the state championships next week. Archive photo via Jack Spitser/Spitser Photography

Following the conclusion of their respective District Championship meets, Florida high school swimming teams in Class 1A and 2A (smaller schools) wrapped up their Regional meets over the weekend, which serve as qualifiers for the State Championships.

The state champs, originally scheduled for Nov. 11 and Nov. 12, have been pushed back by one week, so the 1A championship will take place next Friday, Nov. 18, and the 2A championships will be Saturday, Nov. 19.

The majority of the top times produced in the girls’ Regions meets came out of Region 4, where South Florida HEAT’s Erika Pelaez led the way by posting the top times in the 100 fly and 100 back.

Pelaez, a junior, won 1A state titles last year as a sophomore in the 50 free and 100 back.

Bozzuto set best times in both events last month, putting up respective showings of 22.93 and 1:02.36 at the PBCHS Swimming Championships.

In the 100 breast, defending champion and Cutler Bay senior Olivia Dinehart was a close second in 1:02.48, just shy of her best set when she won the state title last year of 1:02.28.

Bozzuto also played a pivotal role in The King’s Academy’s 200 medley relay, which put up a time of 1:43.40 to come within earshot of the state record, which stood at 1:42.38 until Riverview Sarasota lowered it to 1:42.04 at the 4A state meet on Saturday.

Also posting the top time in the class from Region 4 was Florida commit Julia Podkoscielny, who paced the 200 IM in 2:03.29. The Pine Crest senior has won three consecutive state titles in the 200 IM (2A in 2019 and 2020), and has put herself in position for the career sweep next week.

Over in Region 3, Cardinal Mooney senior Michaela Mattes appears well on her way to a fourth straight title in the 500 free, leading the field by more than two seconds in 4:50.89. Mattes, who is committed to Florida, has been as fast as 4:40.12, done this past March.

The Bolles boys, who powered to the Region 1 team victory by 380 points, had numerous swimmers post top times across the Region meets to set themselves up for a run at yet another state title.

Smiley, who is committed to Indiana, set a best time of 55.37 in Region 4 to advance second overall into the 1A championships behind Heck.

Also posting top times for Bolles was Andrew Kravchenko in the 50 free (20.70), and the team also put up the quickest times across all three relays.

Region 4 also featured Florida South HEAT junior Kaii Winkler, who made headlines earlier this year by becoming the fastest American 15-year-old ever in the long course 100 free. The HEAT is a team of home-schooled athletes.

I thought Kaii Winkler was a Junior.