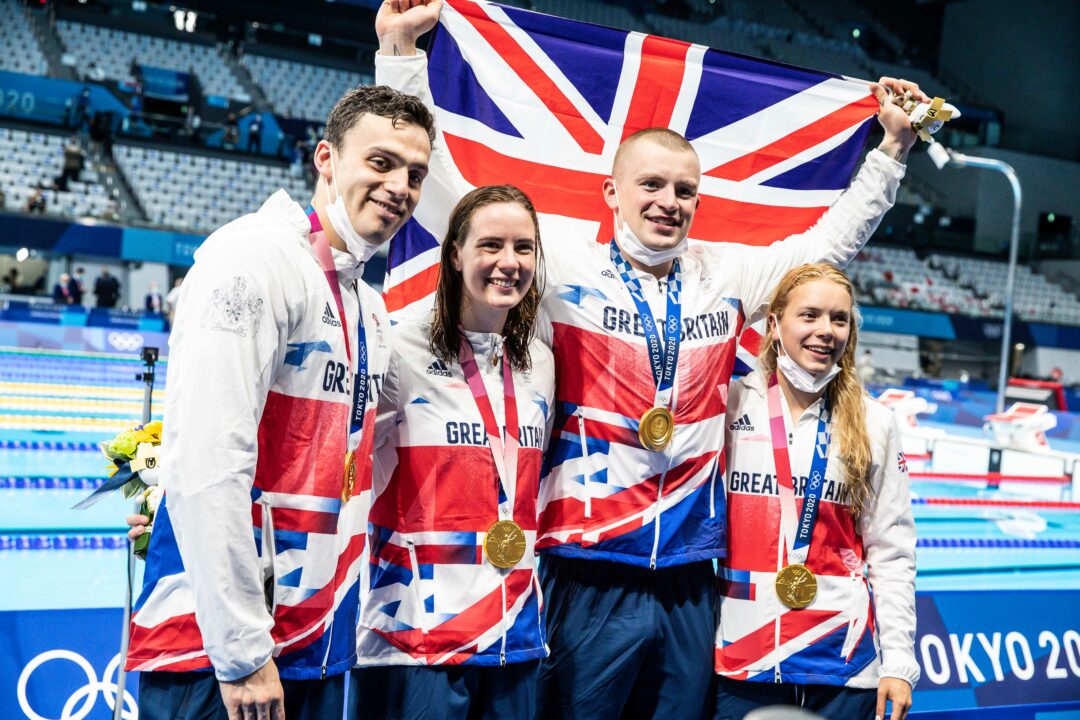 Great Britain is the favorite in the mixed freestyle relays at European Championships, but the medley is an entirely different story. Archive photo via Jack Spitser/Spitser Photography

All season best splits add ups use a flat start for the lead-off swimmer and the fastest split this season for each of the other relays legs unless otherwise noted.

The Europeans were shut out of the medals in this event at Worlds, as Australia, Canada, and the United States got on the podium. Great Britain finished fourth, and they’ll be the favorites here in Rome, as they finished well ahead of both the Dutch and the Italians.

The Brits will have to make an exchange, as Lewis Burras isn’t going to Euros. Most likely, that means Jacob Whittle will draw into the lineup of Tom Dean, Anna Hopkin, and Freya Anderson. One thing to keep an eye on will be their relay order; Dean led off at Worlds, but he’s thrown down some sizzling splits this season (including a 46.70 at Commonwealth Games) which might prompt the Brits to have him go second. Regardless of the decision, they’re still the clear pick for gold.

Now, we reach the interesting part: France did not race this at the 2020 European Champs or the 2022 Worlds, indicating that they might choose to bypass the event. But they entered a team, and the season-best splits of Hadrien Salvan, Maxime Grousset, Marie Wattel, and Charlotte Bonnet add up to 3:23.19, which is the second fastest add-up by about nine-tenths. That’s an intriguing relay, and though it’s likely given their track record that they scratch, we can’t ignore them.

Behind the Brits (and maybe the French) the Dutch and the Italians have an interesting battle going on. The Netherlands beat the Italians by over half a second at Worlds, finishing fifth in 3:24.24. Their add-up is 3:24.08, suggesting that they’ve just about hit their threshold, at least for the season. This relay has taken a big hit with the retirements of both Femke Heemskerk and Ranomi Kromowidjojo, but the Dutch are still in the medal hunt.

The Italians though, have an almost three-second difference between their season best and their add-up time. That says they have a lot left to give on this relay. They’ll have the option to field the same team of Lorenzo Zazzeri, Alessandro Miressi, Silvia Di Pietro, and Chiara Tarantino. Their add-up puts them ahead of the Dutch, which means that if they can get closer to that time, they could edge ahead of them and grab a medal.

Rounding out the top five we have Sweden. They posted a 3:29.03 at Worlds without using Sarah Sjostrom, and using the same team, their add-up is 3:28.71. They’re the start of the next tier of teams in this event as they beat Israel at Worlds by over a second. However, if they continue to not use Sjostrom on this relay, which seems likely given her already paired down schedule, it will be hard for them to make a run at a medal.

Were they to exchange Sjostrom for Junevik, their add-up would drop to a 3:25.66. They also have the option to use Bjorn Seeliger, who’s Sweden’s top-seeded man in the 100 freestyle with a 48.84.

Even without their usual 4×200 relay staples Duncan Scott and James Guy, the Brits are still the team beat in the mixed 4×200 freestyle relay. From their winning relay at the 2020 Euros, Dean returns, as does Anderson. Though Matt Richards wasn’t at his best at Worlds, he found his form at the Commonwealth Games, splitting 1:46.47 on Wales’ 4×200 free relay. Likely taking Abbie Wood‘s place will be Lucy Hope, whose season-best split is a 1:58.76. Their splits add-up is about a second and a half ahead of the next fastest, giving them a clear shot at repeating as champions.

At the 2020 championships, Hungary finished sixth, but their add-up time from this season suggests that they’re capable of a much higher finish. That’s even without factoring in Kristof Milak, who has the 200 fly final at the beginning of the session. With the team of Richard Marton, Nandor Nemeth, Nikoletta Padar, and Anja Kesely, their time adds up to 7:29.43. That’s the only add-up other than Great Britain’s sub-7:30, which makes them a huge threat for a medal.

Once again, it’s unclear if France will actually swim this relay–they bypassed it at the 2020 Euros, like the 4×100 free relay. However, if they do opt to swim it they’re capable of putting together a team with a good chance at a medal. Salvan, Bonnet, Roman Fuchs, and Oceane Carnez have splits that add-up to 7:30.13, putting them less than a second behind the Hungarians.

Though they don’t have the firepower to challenge the Brits, the Dutch should once again be competitive for a silver or bronze medal, especially if the French don’t start. Similar to the 4×100 free relay, the Dutch and the Italians are once again locking horns. The Dutch times all come from a flat start, which is something to take into consideration. As is the fact that in our add-up of the Italian times, we left Marco De Tullio and Lorenzo Galossi off the relay due to scheduling concerns with their individual events.

More so than any of the other mixed relays, the medley is defined by the absences in Rome. For example, Great Britain is the world record holder, Olympic champion, and defending European champion in this event but they are facing an uphill battle to repeat. That’s because without Kathleen Dawson, Adam Peaty, and James Guy on the front half of the relay, they’re not as far in front of the field as they usually are. They’ll likely run the same relay they did in Worlds prelims of Medi Harris, James Wilby, Jacob Peters, and Hopkin, where they swam a time of 3:43.64. They also have the option to substitute Hopkin for Anderson, which they did in the final. Putting Anderson’s season-best split of 52.70 brings their add-up down to 3:42.64, but while that might be enough for a medal, it might not be enough for gold.

The Dutch quartet of Kira Toussaint, Arno Kamminga, Nyls Korstanje, and Steenbergen surprised for bronze at Worlds, and they’ll be back fully loaded here. They earned bronze in 3:41.54, out-touching the Brits for the final spot on the podium. That they’ve already beaten the Brits this season, combined with the fact that Britain won’t have their usual full-powered lineup, gives the Dutch a real chance at the gold.

The third team in the mix is the Italians, who have perhaps the best first two legs in the world thanks to Thomas Ceccon and Nicolo Martinenghi. Their add-up time with Elena Di Liddo and Di Pietro is a little soft because it’s unlikely that Ceccon will tie his world record leading off the relay, but they nevertheless are a team to watch. In front of the home crowd, they could make some noise.

For teams using a male breaststroker and a female freestyler, something to keep in mind is that the finals of those events are on the same day as the mixed medley relay, as are the semifinals of the inverse, which means that this will be many swimmers second swims of the session.

After these top three teams, the depth in this event drops off a bit. That said, there’s a slew of teams whose add-ups are within about a second of each other, which means that we could see a second race developing behind the medal contenders. All of these teams’ lineups are in flux, as they have to replace multiple swimmers.

For Germany, this forced switch-up could actually be a net positive. That’s because on their Worlds relay, they opted to use a female breaststroker (Anna Elendt). The only other team in the final that did that was Japan, and the teams finished seventh and eighth. However, Elendt won’t be in Rome, and neither will their freestyler Rafael Miroslaw, which forces them to rethink their lineup. They could still opt for a female breaststroker, but hopefully, their experience at Worlds taught them something and they go with Lucas Matzerath. That choice does put them in a tough spot as they don’t have a pure female 100 freestyler, but even sticking Isabel Gose with her 54.86 flat start from 2019 adds up to a faster time than they went in the Worlds final.

For the fifth spot, it’s a tough call between Sweden and Poland. Sweden will likely use Sophie Hansson on breaststroke, as that’s their best option for that leg. They also have a choice between three male freestylers, so they’ll likely stick whoever is swimming the best (or second best to avoid a double) on the end of the relay. For argument’s sake, we stuck Robin Hanson on the end, since he had their fastest split at Worlds. Even with Hansson on breaststroke, they have a faster add-up time than the Poles, but don’t write Poland off entirely.

Poland boasts a lead-off from Ksawery Masiuk, and their middle 200 looks solid with Jan Kozakiewicz and Julia Maik. However, like Germany, they don’t have a female 100 freestyler, which weakens their relay. They could stick Kasia Wasick on the end, but her fastest flat start this season is a 56.23. She’d likely be faster here, but with Sweden’s add-up over a second faster than Poland’s, we’lL give them the edge to take the fifth spot.

It feels strange to say, but that analysis makes the mixed 100 free relay WR look a little weak. If Hopkin repeated her split from Tokyo and the rest repeated their times from this season, they break the WR. I suspect this is a record that will be broken quite a few times in the coming years before settling down. A theoretical best WR for Australia right now would be 3:17.75 (Cartwright, Chalmers, MOC and McKeon PBs) which would be very tough to take down.

Also I had no idea a mixed 4×200 relay was a thing. If this was swam more widely it would be a pretty interesting battle between Aus, USA and GB.

I think Sweden would use their male breaststroke who does a 1:00.3 flat start, and then have a female on butterfly.