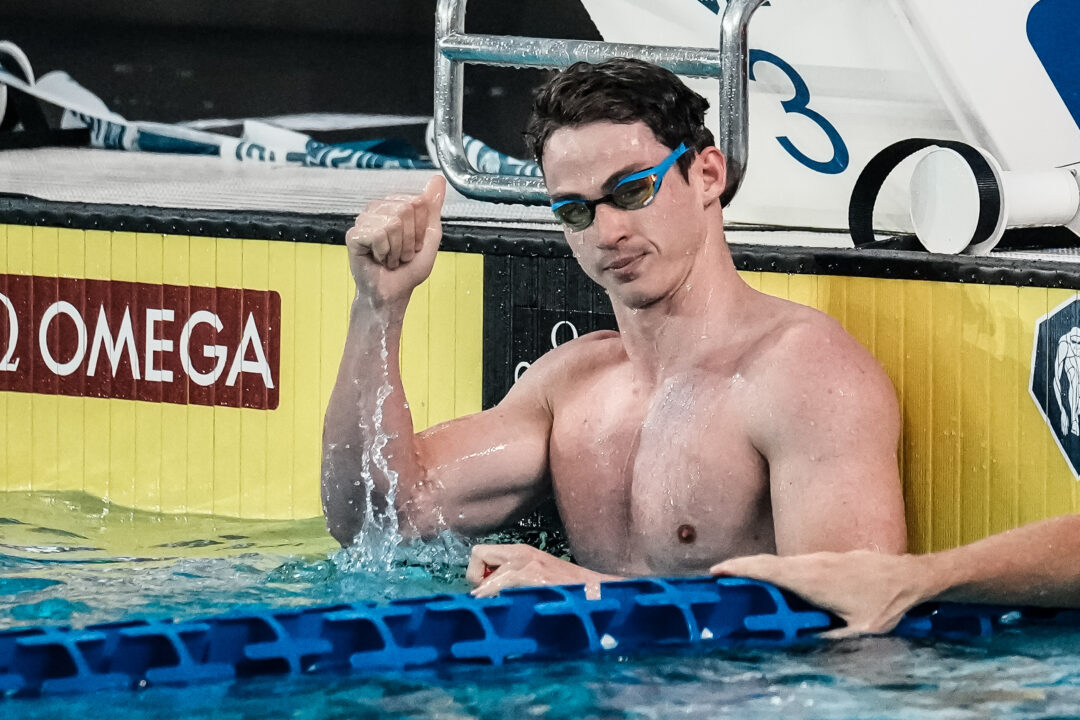 We saw the penultimate heats session transpire this morning from Sheffield, with slots still available on the British World Championships roster.

Through this meet thus far, we’ve seen Tom Dean, Duncan Scott, Anna Hopkin, James Wilby and Lewis Burras all notch their names into the lineup. However, all but Burras were pre-selected for Budapest by way of their having placed in the Olympic finals, therefore, only their individual events here may be new.

Swansea’s Medi Harris has been on a tear as of late, having captured her first sub-1:00 100m backstroke in two separate meets leading up to these Championships.

She holds strong here as the top-seeded swimmer, firing off a morning outing of 28.07 ahead of Loughborough’s Lauren Cox. Cox nabbed seed #2 in 28.29 while a pair of Stirling teammates in Kathleen Dawson and Cassie Wild went 3-4 in efforts of 28.31 and 28.58, respectively.

No additional female made the grade for Budapest in the individual 100m back here earlier, however, with the top swimmer, Harris, clocking 59.95 when British Swimming mandates a 59.02.

21-year-old Lewis Burras swam the race of his life last night in the men’s 100m freestyle, capturing the national title, as well as a Budapest-worthy time of 47.78. That rendered the former University of South Carolina swimmer as the #2 performer in British history, a great momentum builder for tonight’s 50m free final.

Burras indeed landed lane 4 once again, producing the only sub-22 second outing of the field in 21.90. Pre-qualified Ben Proud will be flanking him with a cool 22.25 while Wycombe’s Adam Barrett will be on the other side of Burras, courtesy of his 22.52 morning effort.

It was just this past December when Burras established his new lifetime best in the splash n’ dash, a monster mark of 21.79 at a local Winchester meet. On a British historical swimming scale, his result sits only behind Proud who owns the national record in a time of 21.11 from 2018.

Of note, Calum Bain is Irish, therefore, Thomas Watkin is the 8th seed for tonight.

That’s already a lifetime best for the teen, with 18-year-old Van Selm entering these Championships with a previous career-quickest of 4:16.17 from this same meet last year.

As a refresher, Van Selm competed at the European Junior Championships in Kazan in July 2019, reaching the semifinals of the 200 free (15th) and the finals of the 100 free (8th) and taking home a silver medal with the GBR 4×200 free relay. She also competed at European Youth Olympic Festival that summer, bringing home an individual silver in the 100 free and a gold and two silvers in relay events.

She’ll be chased by a pair of Freyas for tonight’s final, with Freya Anderson and Freya Colbert notching marks of 4:15.05 and 4:15.22, respectively.

Anderson is prequalified for Budapest for relays but is chasing an individual event addition here, while Colbert already nailed a big-time personal best in the 200m free.

Loughborough’s James McFadzen was over a second behind in 2:01.81 while pre-qualified Duncan Scott was also going through the motions this morning in a time of 2:01.99.

We’ll see what former Florida Gator Mark Szaranek can pull out tonight, ranked 4th for the final in 2:02.54. He sits as GBR’s 8th fastest performer of all-time with a lifetime best of 1:58.07 while McFadzen owns a PB of 1:58.74 from this same meet last year.

Already having reaped gold here on multiple occasions, Loughborough’s Abbie Wood will look to grab another top prize in this women’s 200m IM.

She is pre-qualified for Budapest in this event and still produced a time of 2:11.91 to lead the field by well over 3 seconds.

Sheffield’s Candice Hall is ready to put her name in the ring for possible qualification while IM mainstay Lily Booker is also in the mix.

Glasgow’s Katie Shanahan won the 200m backstroke and has that fueling her 200m IM campaign. The 17-year-old owns a lifetime best of 2:13.13 in this event, a time she produced en route to taking both 200m IM and 400m IM gold at last year’s European Junior Championships in addition to individual silvers in the 100m and 200m backstroke events.