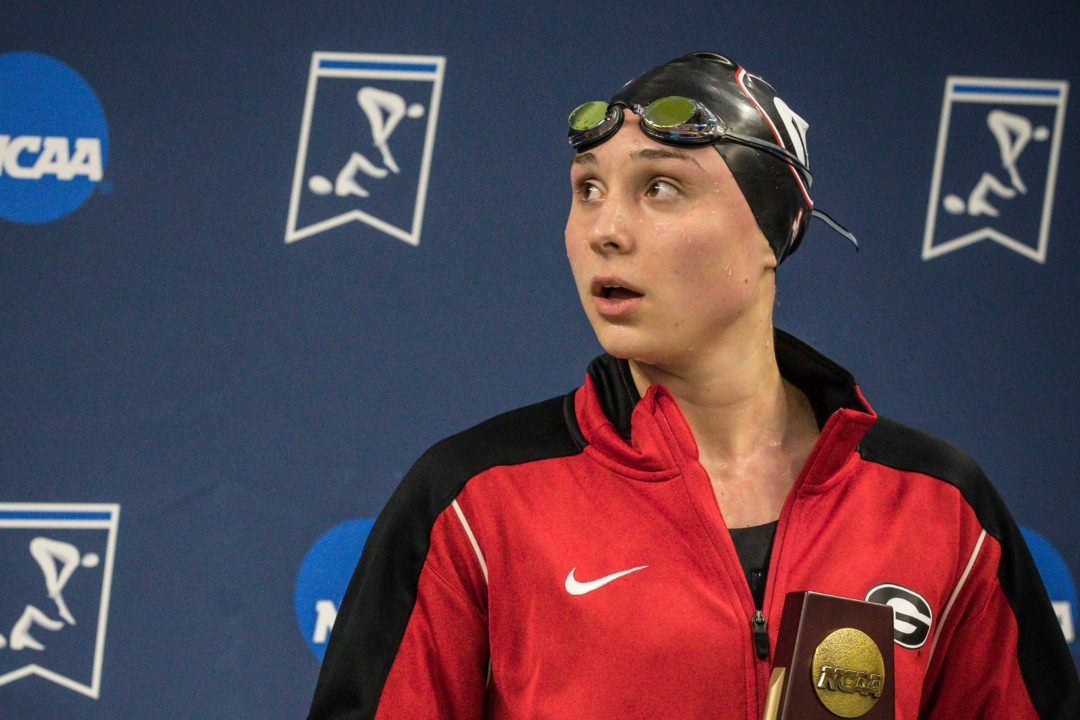 Courtney Harnish led Georgia's charge on Day 2 of the SEC Women's Championships, leading a group of three swimmers advancing to the 'A' final of the 500 free. Archive photo via Jack Spitser/Spitser Photography

After exiting last night’s session in second-last place after DQing their 200 medley relay, the Georgia women rebounded with a monster morning session by putting 13 individual swims into scoring position tonight.

That includes seven ‘A’ finals, including going three up in the 500 free. Courtney Harnish was no surprise, but Jillian Barczyk and Olivia Anderson both did what they had to do to sneak into seventh and eighth (seventh through 10th place was separated by just over three-tenths).

They’re also in position to go 1-2 in the 200 IM, and freshman Maxine Parker had a great 50 free to join senior Gabi Fa’Amausili in the championship heat.

The Gators sit second by going 4/5/2 for the session, led by a 500 free showing that saw them put two swimmers in each final.

Texas A&M notably puts zero swimmers into an ‘A’ final tonight. Two years after winning their fourth straight SEC title, the team is currently on pace to place eighth.

Despite last night’s relay DQ, Georgia would take over the team lead if they duplicated their prelim performance in tonight’s session (not including tonight’s relay and diving).

Florida sits a close second, and Tennessee, Kentucky and Alabama all firmly remain in the team race early as well.

Arkansas’ Brooke Schultz (335.10) and Maha Amer (334.60) have qualified 1-2 into the final of the women’s 3-meter, while also slotting a third diver into eighth. Two advanced into the top eight from Texas A&M, while Florida, Kentucky and LSU put one through.

Key in the team race, the Gators also add 28 points with 12th and 14th place finishes, while Tennessee adds 22 and Georgia gets a mere three.

With diving from last night and how 3m appears to be shaking out at the moment, Florida will open up a very large lead on UGA

Just like the previous 2 years, everyone counting the Gators out again.

Never underestimate the dellusions of a college athlete.

The Gators lost each of the last two years, so anybody who counted them out was correct…

Sorry. Meant to be another comment not a reply… 🙂

Does the SEC have a women’s team that will be top 5 this year? I doubt it!