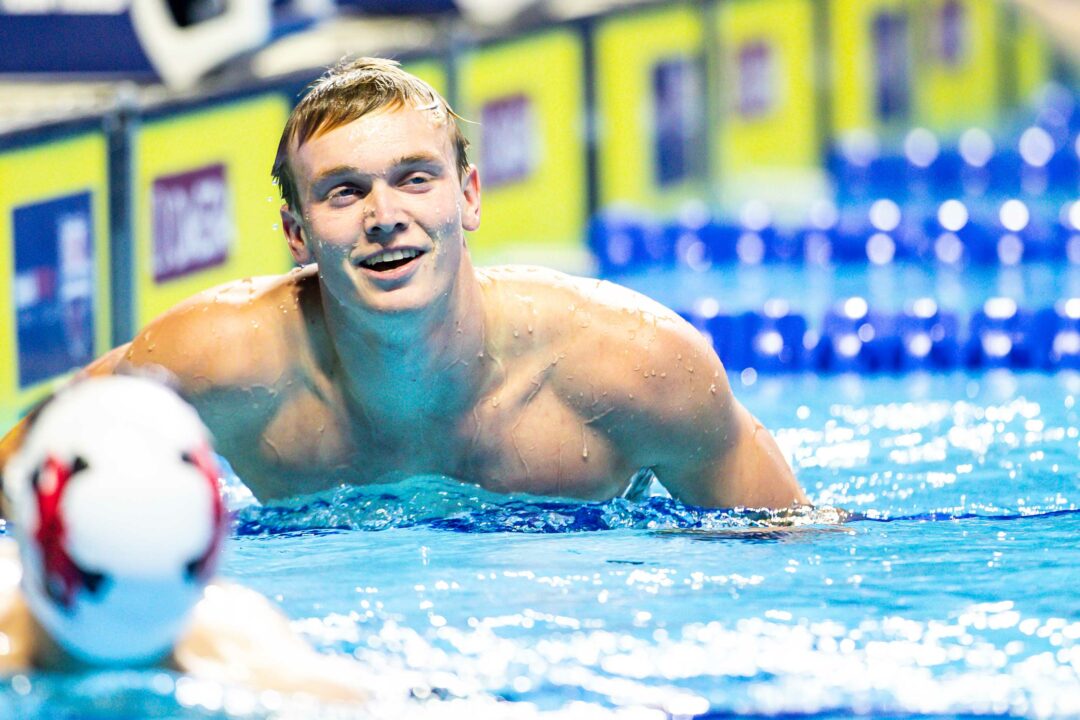 Cal's Trenton Julian is looking to pick up his first title of the weekend. The question is whether or not it will be a best time. Stock photo via Jack Spitser/Spitser Photography

In the first A final of the evening, Mission Viejo’s Justina Kozan will be chasing making a run at winning her first title of the week. Kozan seemed fairly relaxed in the 200 fly this morning, swimming a 2:12.31. Tonight, Kozan will be looking to get back under 2:10.

Cal’s Trenton Julian is also swimming his first of (likely) many finals tonight. Julian took the top seed in the men’s 200 fly by over 2 seconds. He swam a very relaxed first 100 this morning, which is very different from how he raced at the U.S. Olympic Trials in June. If Julian takes the race out harder tonight, he may take a crack at his 1:55.35 personal best.

Irvine Novaquatics 14-year-old Teagan O’Dell took the top seed in the women’s 100 free this morning, with teammate Ella Ristic coming in 2nd. O’Dell swam a 56.34 this morning, which was ties for #14 all-time for 13-14 girls.

A tight race is set for the men’s 100 free, as this morning Jesse Novak, Destin Lasco, and Cristian Quintero all swam within 0.12 seconds. Quintero has the fastest personal best of the field, and is the Venezuelan Record holder in the men’s 100 free.

Justina Kozan got the job done, using an excellent final 50 to blow past Mia Kragh. Kozan split a blistering 32.89 on the final 50, out-splitting Kragh by over 2 seconds. Although Kozan was off her personal best of 2:09.68, the swim was her fastest of 2021 by 3 seconds.

Mia Kragh posted a another big lifetime best tonight after dropping 2 seconds in prelims. Kragh entered the meet with a best of 2:16.74, which she then lowered to 2:14.15 this morning. With her 2;11.65 tonight, Kragh has now dropped 5.09 seconds in the event today. Most impressively, Kragh’s previous lifetime best was from May of this year, just 3 months ago.

Julian touched in 1:54.71, which was a personal best by over half a second. With the swim, Julian is now the fastest American in the event this year, and the 7th-fastest swimmer in the world this year. He also rises to the #9 American all-time in the event. The 200 fly was just the first event in a full schedule for Julian this week, so we’ll be watching eagerly the rest of this week.

Harry Homans was slightly faster tonight than he was this morning, taking 0.35 seconds off his prelims time. The swim was off his personal best of 1:58.18.

Schroeder Y’s  Jack Lustig chipped another 0.39 seconds off his lifetime best from this morning, taking 3rd.

14-year-old Teagan O’Dell has gotten off to an electric start here in Irvine. After becoming the #14 all-time performer for 13-14 girls this morning, O’Dell dropped another half-of-a-second from her time, swimming to victory in 55.82. The time makes O’Dell the #5 performer all-time in the 13-14 girls age group.

Jesse Novak got the job done, using a great 2nd 50 to charge into the wall first. Novak was off his personal best of 49.18, but 49.46 is his fastest time of the year. His best time is from 2019 Summer Nationals, exactly 2 years ago.

Cal’s Destin Lasco touched in 49.50, which is also his fastest time of the year. Similarly, Lasco was off his personal best. Lasco’s lifetime best checks in at 49.40 from the 2018 Summer Nationals meet.

Stanford’s Luke Maurer took 3rd with a 49.82. Unlike Novak and Lasco, it wasn’t his fastest time of the year. Maurer’s lifetime best is a 49.57 from the Olympic Trials Wave II meet in June.

The top seed coming into the meet, Cristian Quintero, came in 4th with a 49.85. The swim was a tick faster than Quintero swam this morning, but was still nearly a second off his personal best of 48.94.

16-year-old Jillian Cox got out the lead early, and was pushed by 13-year-old Kayla Han through the first half of the race. Han faded down the stretch, but Cox kept pushing the pace, ultimately getting into the finish well ahead of the field. Cox split 4:19.50/4:22.61 on her 400s, marking a consistently split race. The swim was a best for Cox by half a second.

Juli Arzave made the top 3 from the slower heat swum this afternoon. Arzave’s time was 0.01 seconds faster than her previous personal best of 8:48.80, which she swam just over 2 weeks ago.

Texas’ David Johnston led the race wire-to-wire, establishing a new personal best in the process. Johnston has done well in the 1500 this summer, making the Olympic Trials final, and finishing 7th with his then-best of 15:18.61. Johnston’s time from tonight took another 2.5 seconds off his best.

Chris Nagy also posted a huge lifetime best, swimming a 15:32.52 for 3rd. The swim marks an improvement of 13 seconds for Nagy. His previous best was from 2019.

California’s A team won a very tight race of Irvine Novaquatics. The fastest leg in the entire field came from Cal’s Destin Lasco, who split 48.87 on the 2nd leg. Cal was led off by Dylan Hawk in 50.98, Matthew Jensen went 3rd in 50.07, and Dare Rose anchored in 49.52.

Trenton Julian led the Rose Bowl team off in 49.97, which marks a new personal best for the 22-year-old. Julian’s time marked a personal best by over 1.5 seconds, just 90 minutes removed from his electric 200 fly. The Rose Bowl squad finished 5th.

I hope she gets paid as all NCAA athletes should.

What does that have to do with this article?

SWIM SWAM Your coverage this week and last has been awesome, who forgot open water was happening? Even rowdy showed up! Hopefully we get mens recap!

The article referred to his 100 free relay leadoff as bettering his pb by 1.5 secs.

What? I had missed Destin Lasco when I read the psych sheets!
Cool to see him swim another long course meet. He has swum so rarely in the big pool this year.