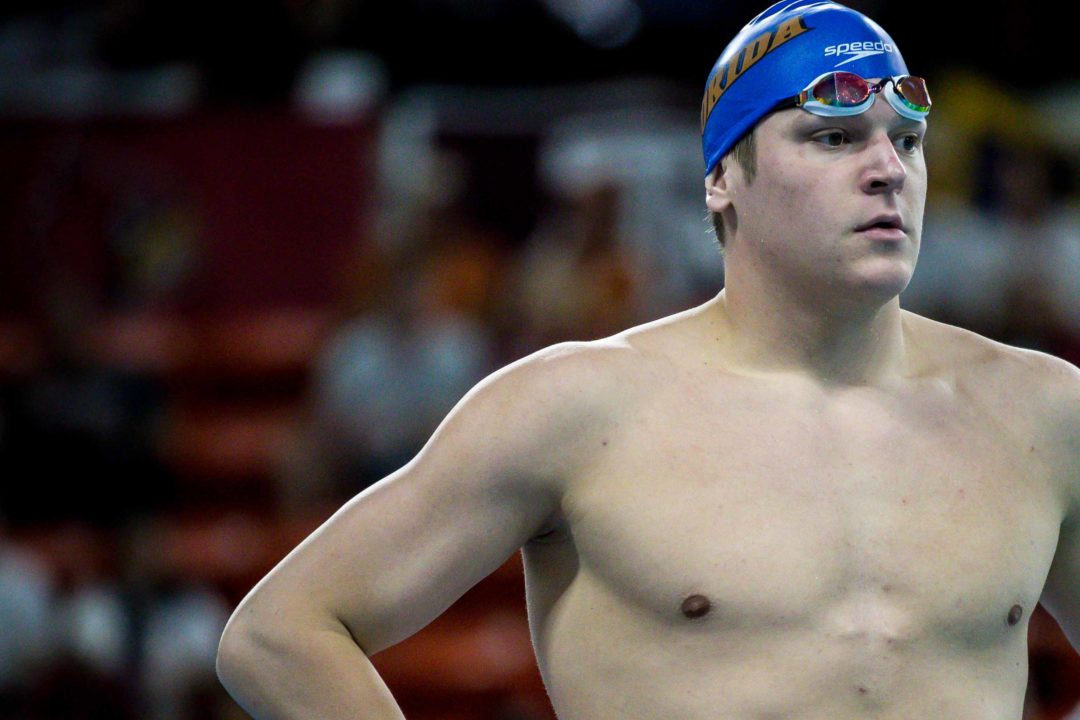 The Florida Gators put on a clinic during the opening preliminary session of men's SECs, putting nine men into 'A' finals in just three events. Archive photo via Jack Spitser/Spitser Photography

The Florida men really took control during the second session of the SEC Championships, putting nine men through to ‘A’ finals and 16 total in scoring position over just three events.

Before getting into the ups/downs, here’s a reminder of where the team scores stood coming into the day, noting that all diving action has already been completed.

Florida’s charge was spearheaded by the 500 free, where they put five guys in the ‘A’ final, qualifying second through sixth overall. Kieran Smith, Trey Freeman and Bobby Finke were all expected to advance, but it was sophomores Alfonso Mestre and Tyler Watson who really stood out, both hitting big best times to qualify second and sixth overall.

Neither of them even competed at SECs as freshmen, and their swims this morning put them in position to earn an invite to NCAAs next month.

The Gators also had Dillon Hillis, Clark Beach and Kevin Vargas punch above their seeds to place fourth, 11th and 16th in the 200 IM, and freshman Adam Chaney led Will Davis and Eric Friese into the championship final of the 50 free.

Given that the Gators were the only school to put three men into the ‘A’ final of the 50 free, they’re set up well for the 200 free relay tonight as well.

Texas A&M kept their head above water this morning, though their freestyle depth was pretty clear. Georgia’s swimmers are a little bit off of where they were mid-season, but still had a relatively strong session with 13 finals swims.

Florida projects to roar past Kentucky’s diving lead and take the #1 spot after tonight on individual events alone, not to mention they’re likely in line to score big in the 200 free relay.

Georgia and Texas A&M may be close to taking second and third after the relay as they run down Kentucky and Tennessee, but Florida’s opening up an emphatic early lead.

Eyiii CARUMBAA – What is happening to those MAN VOLS? Did they forget to bring their beaver-tailed hats to the pool this morning? They are looking like 6th – 8th in this meet. Hey dudes – IT IS RALLY TIME! Go MAN VOLS!