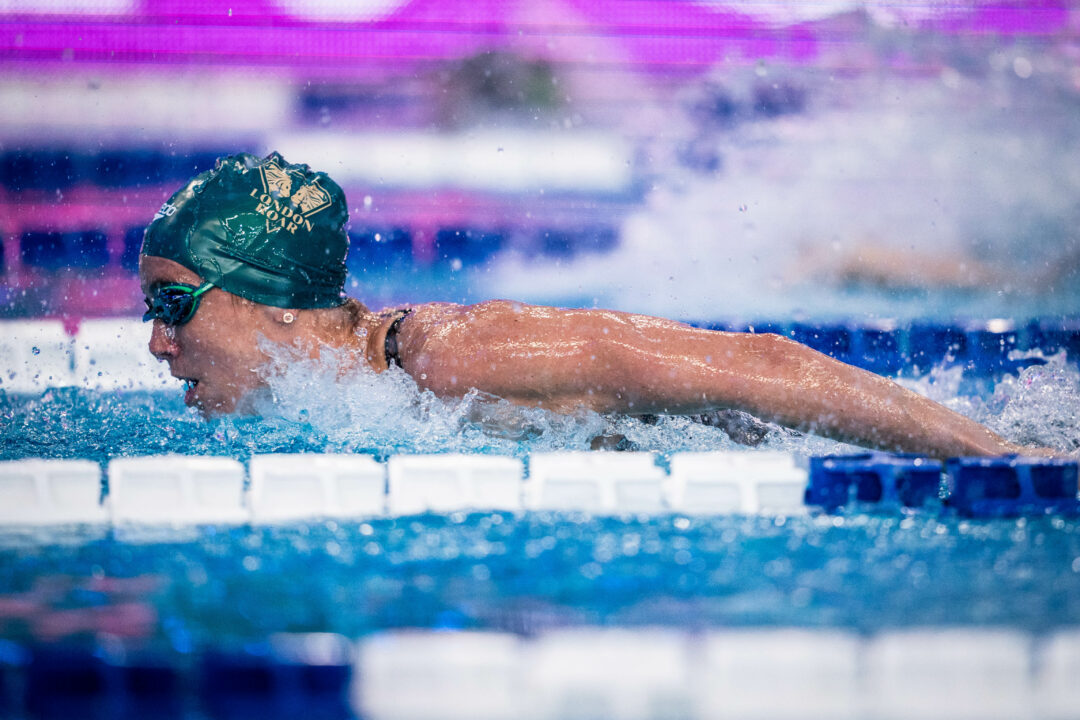 London has put Emma McKeon in the 50 back skins events while LA has subbed Anastasia Gorbenko in for absent Madi Wilson in the 200 free. Current photo via Mine Kasapoglu

Energy and London have secured some powerful entries for day two with only 22 points separating the duo. Meanwhile, LA will be looking to catch Tokyo as they are only separated by two points.

Energy sprinter Sarah Sjostrom is set for the 100 free next to Siobhan Haughey as well as the 50 fly next to Maddy Banic. Also swimming the 100 free/50 fly double for LA will be Abbey Weitzeil, who is fresh off a 50 free American record from yesterday.

With Madi Wilson out of the pool for the Current, versatile star Anastasia Gorbenko will go in for Wilson in the 200 free next to Valentine Dumont against the likes of freestyle ace Haughey.

In the women’s 50 back skins, LA will put Ingrid Wilm and Helena Gasson on the front lines against the likes of Energy’s Mary-Sophie Harvey and current event World record-holder Kira Toussaint of the Roar. Toussaint is also scheduled for the 100 back next to Katie Shanahan. Meanwhile, yesterday’s 200 back runner-up, Minna Atherton, will not swim at all today.

Also entered in the 50 back skins for London will be fly/free sprinter Emma McKeon, who is scheduled to swim the 100 free/50 fly double as well.

In the men’s 50 fly skins, LA will relay on Tom Shields to swim his signature stroke alongside teammate Maxime Rooney, who has flexed both sprint free and multi-distance backstroke abilities. Energy Standard will go “all hands on deck” with top sprinters Chad le Clos and Ben Proud. Keep an eye on London sprinters Vini Lanza and Dylan Carter as well as Toyko sprinters Takeshi Kawamoto and Vlad Morozov.

In for the individual 100 free today after a blazing 20.80 in yesterday’s 50 free will be London’s Kyle Chalmers, who will accompany match six skins winner Katsumi Nakamura.

After placing second in yesterday’s men’s 50 back event, LA freestyler Ryan Held will take a jab at the 100 IM event. Swapping in for Held in the 100 free will be Martin Malyutin, who is also entered in the 200 free with Fernando Scheffer. At the same time, Abrahm DeVine has been put in three events: 100 back, 100 breast, and 400 IM.

Mckeon can swim the backstroke?

Yes Emma with only 3years training was NSW 15 years champ in 2010 . It was this swim in 2.14 that I knew she had it to be world class. Emma was still exploring capacities but from then took a liking for free sprint. .Aust was served well with backstroke 200 talent so her narrow 2012 miss in 100 free relay was
a good move . ( it took 54.low to make it & I think she At the time she thought it was a failure but with only 5 years training to almost be a Gold Medal relay swimmer was amazing.
I’d love to see her do back LCM again for fun. .