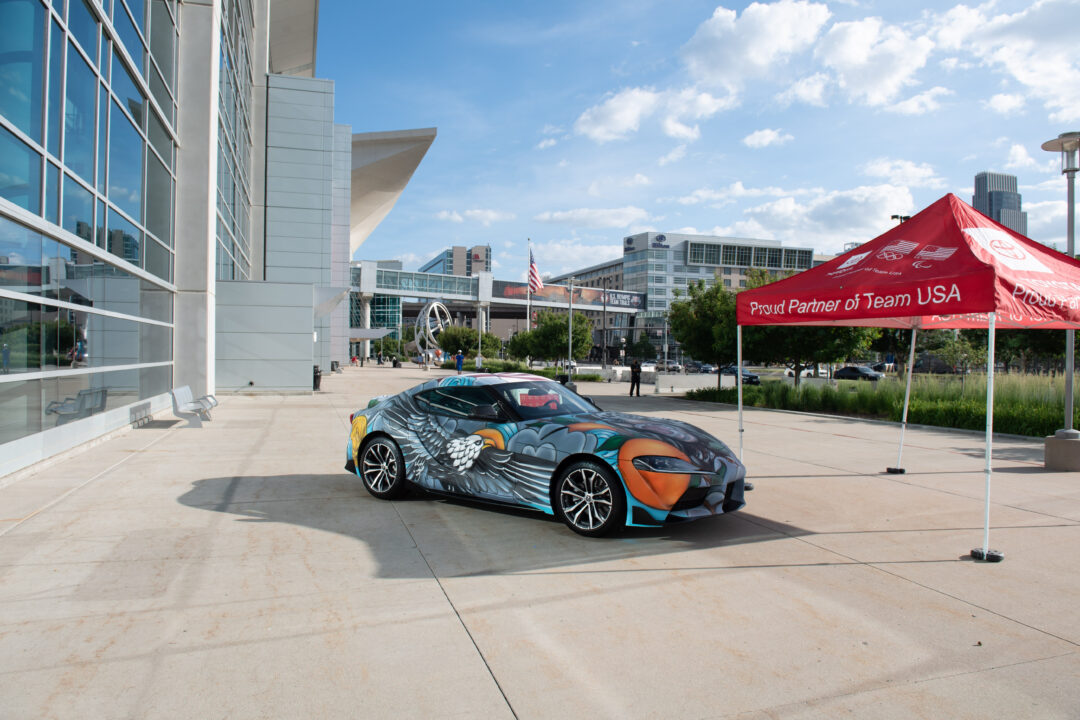 You can bid to win a Caeleb Dressel-themed sportscar as part of this year's USA Swimming Foundation Golden Goggles Auction.

USA Swimming has begun to compile a list of items that will be available for bid as part of the Golden Goggles Awards ceremony.

The annual Golden Goggles Awards serve as USA Swimming’s star-packed gala, honoring the best in American swimming from the prior year.

The auction can be accessed here: https://cbo.io/bidapp/index.php?slug=usaswimfoundation. About 100 items will be available and will be added. Auction opens November 29, but people who want first cracks at items should register now prior to the auction (button is at the top of the page in the link). Everyone needs to register before they can bid.

During the COVID-19 pandemic, the Foundation took on a special role, distributing millions of dollars in aid to clubs struggling financially.

As always, this year’s auction is filled with items both valuable and invaluable. Here are some of our favorites from the 2021 lot:

Yep, it’s an actual car. A fast car. The base level MSRP on a Toyota GR Supra is about $43,000. But this is a special GR Supra – it’s tricked out with a Caeleb Dressel themed paint job that includes motifs from his tattoos like the famous eagle on his left shoulder and chest.

Honestly, whoever buys this gets the status of ‘coolest swim nerd’ for at least a year.

Image in the header.

I have no idea how USA Swimming got their hands on these, but that’s crazy cool. Sylvester Stalone, of course, portrayed the great screen boxer Rocky Balboa in the first few of the films in the Rocky franchise. The story goes that Rocky is a local boxer, fighting on weekends for extra cash, who through a series of events gets the opportunity to fight the famous boxer Apollo Creed.

Of course Rocky wins, everyone’s happy, and he goes on to beat some other guys later.

The movies are the birthplace of a number of sporting archetypes you may or may not have known originated there. This is iconic. This is something you put in your living room and suddenly have the coolest house on your street.

A guitar signed by The Eagles

The Eagles the band. Not the football team. The Eagles have the first and third best-selling albums of all-time, and have a never-ending list of iconic songs, including Take it Easy, Hotel California, Desperado, Already Gone, One of These Nights, Lyin’ Eyes, and Take It to the Limit.

That’s just the tip of the iceberg.

The auction will also include a pile of swimming memorabilia, as one would expect, with a lot of Katie Ledecky signed items and 2016 and 2020 signed and framed Olympic Team flags.

Other non-swimming items on the list include wine and a stay-and-play golf package at Pinehurst Resort in North Carolina. Pinehurst is one of the most renowned golf facilities in the world, home to nine 18-hole courses and having hosted a number of major tournaments (including 5 U.S. Open tournaments).

There are a few other items that will only be up for bids via the LIVE auction at the event. Among the coolest of those is a Michael & Michaela Andrew surf package.

You know Michael Andrew, US Olympic gold medalist, World Champion, World Record holder. Spend a day taking a surfing lesson with Michael in Coronado, California (gear included, flight and hotel not included), and grabbing a meal at one of Michael’s favorite San Diego spots. And that’s cool enough on its own.

But did you know that his sister, who swam as a kid but never pursued it to the level as her brother, is an artist?

Unsurprisingly, a lot of her art is water-themed, including a series of painted surfboards, one of which is included in this package.

Michaela says that the way it turned out isn’t how she envisioned it when she started – there was an issue with the paint that ran, but as she was pondering painting over it, she fell in love with it, and left it. That’s the process of art sometimes.

The outcome is a very cool monochromatic image of a streamlining swimmer.

This package includes a day of surfing with Michael Andrew, where you can ask him all of your burning questions about USRPT or being the youngest pro swimmer in US history or growing up in South Dakota, and Michaela’s surfboard art. Rental of surfing equipment will be included. Don’t surf on the art surfboard. Or do what you want, it’s your art, but it would be a shame to ruin such a beautiful work of art.

The auctions open on November 29 and the awards ceremony will be held in Miami on December 7.

Oh my Gosh..!! I wish I wuz rich… I’d put in the highest bid for that Dressel-themed car, for sure. Well, gratzimmissimmo to whoever bids the highest for that gem….
Concept car is a superior concept… ‘coolest swim nerd’ indeed..!!

Will it be possible to take the car to a laser removal clinic when I change my mind about the paint job?

The car is badass. The tattoo on Caeleb is the cringe.

Are you even serious right now? I’m 70 years old and I don’t swim, but I know awesome when I see it. Caelebs arm tattoo is well thought out and expertly executed. Hey Swim Dad, I’d drive that car too.

I think it’s pretty badass, especially if Dressel is driving it.

The disrespect…. Using the 4 cylinder engine version of the car.

A day of surfing with MA?…………hmmmmm. I wonder what that will go for.

I’d have to get paid

He’s only going to hang out with you for 3/4th’s of the session. The last 4th he’s going to quit.