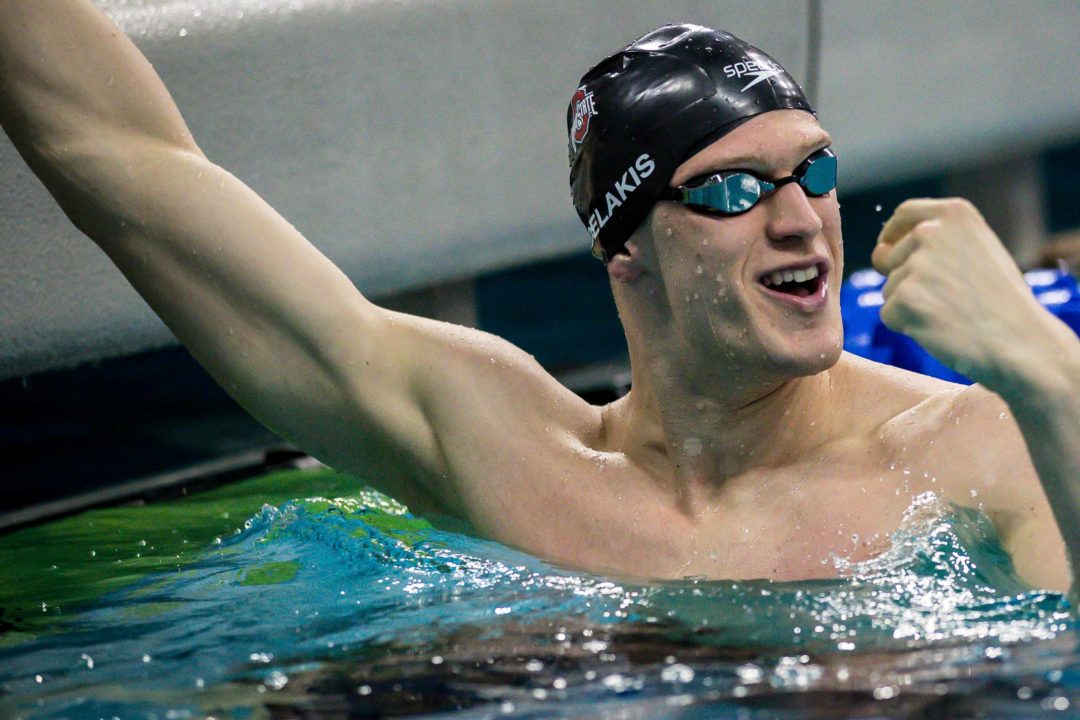 After Ohio State jumped out to the lead over the first two days of competition, Paul Delakis is locked and loaded to bring the Buckeyes a title in the 200 free tonight.

Delakis is the only Buckeye A-finalist tonight, though, while Michigan (8) and Indiana (6) are primed to take over by the end of the session. IU has four men in the 100 fly A-final, and the Wolverines have four in the 200 free final. The Wolverines, who are currently in third after day two’s events, are projected to vault into the lead with tonight’s events.

Meanwhile, Northwestern has the third-most swims tonight, though they’re not projected to fully make up ground on Purdue (fourth) and Wisconsin (fifth) tonight.

Tomer Frankel of Indiana was 44.91 to win the 100 fly title tonight, a massive performance for the freshman. He’s the #2 performer in IU history behind only Vini Lanza, the Big Ten record holder. Frankel is the eighth swimmer under 45 seconds in the nation this year, tied for fifth in the country with Alvin Jiang of Texas and Shaine Casas of Texas A&M.

Michigan’s River Wright was 45.06, the second-fastest swimmer tonight, but he was called for a 15-meter violation off of his first underwater. That moves Indiana’s Brendan Burns into second (45.26), which is the same placement he finished in last year (behind a different teammate, Lanza).

Wisconsin’s Wes Jekel broke 46 seconds for the first time ever, the sophomore swooping in for third at 45.96. He’s now just .15 off of Cannon Clifton’s program record done in 2017. Van Mathias of Indiana was 46.22 for fourth, as the Hoosiers went 1-2-4-6 here, decimating Ohio State’s lead.

In the B-final, Ohio State freshman Justin Fleagle hit a new lifetime best of 46.63 for the win.

Aside from IU coming within 20 points of the Buckeyes, Penn State also jumped Northwestern to move into sixth place by 7.5 points.

Penn State’s Michael Daly looked very strong, jumping out to a big lead after the fly leg. He continued to lead for the rest of the way, though Michigan’s Danny Berlitz went full steam ahead on the free leg, coming home in 50.11 to cut Daly’s lead by over two seconds and nearly catch him.

That’s a Penn State record for Daly, while podium finishers Berlitz and Jared Daigle of Michigan hit lifetime bests, too. Wisconsin had another top-five finish here, with Caleb Aman going 3:44.33.

The Hoosiers jump into first with the 400 IM results in, leading OSU by 17.5 points, while Michigan lurks in third, 36 behind OSU. The 200 free up next has four Wolverines in the A-final, and they’ll make their big move with that event.

A battle between juggernauts, but Ohio State senior Paul Delakis was simply too strong, downing the competition with a 1:32.28. He dropped over a second from his prelims time, and ensures another Buckeye victory in this event after Drew Loy won in 2020.

Even with Wright’s costly 100 fly DQ, Michigan holds the lead after sitting in third most of this meet, just 3.5 points ahead of Indiana. Ohio State is now in third, though they’re right in the mix, only 15.5 behind Indiana.

A race is developing in the next tier, as Purdue (483.5) is holding onto a lead ahead of Wisconsin (444) and Northwestern (413), the Wildcats jumping Penn State and now closing in on the Badgers after their 200 free performance. Iowa, meanwhile, is now 38.5 points ahead of Minnesota for eighth.

WOW…VERY INTERESTING to see the team standings…I think the Mighty Gophers are looking to make their move now! When they told Dennis the day they fired him “we’re going to go in a different direction” they WEREN’T lying about that! They sure did!

Moving in a good or bad way?

Jake Newmark the king of outside smoke

Amazing. Michigan still swimming super fast, even with multiple shutdowns (including two weeks recently). Incredible. How is that even possible? Wow!

they are definitely swimming really well… interesting data points to the mysterious science of taper… for what it’s worth, someone else mentioned that men may need a longer taper in general because they have more muscle… so perhaps the added rest supports that theory?!?

Congrats Michael Daly on your BIG win! Your hard work and commitment makes you a champion but your positive nature and happy demeanor is what sets you apart. I hope all those early morning 800 IM’s were worth it back in the day.

glad to see you finally surface… what would championships be without Guerra singing the praises of his Hoosiers!

Geez, the love for Delakis & OSU is overwhelming.