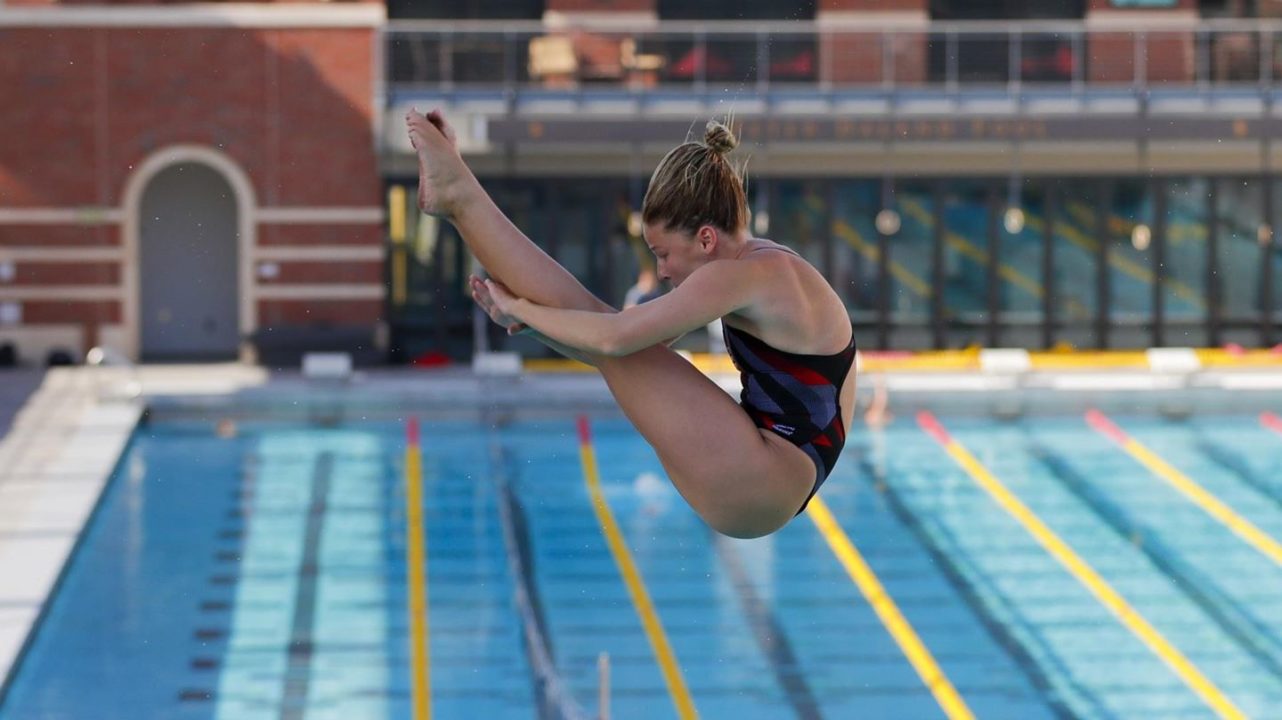 USC has a fourth women's diver qualified for NCAAs, but it was Stanford's Mia Paulsen who dominated the final day on a huge last dive. Stock photo via Hali_Helfgott, USC Athletics

USC has a fourth women’s diver qualified for NCAAs, but it was Stanford’s Mia Paulsen who dominated the final day on a huge last dive. Paulsen scored a massive 72 points on her final dive to surge from fourth to first. It was Stanford’s young duo of Daria Lenz and Carolina Sculti who scored at NCAAs last year, but the junior Paulsen has had a huge week at Zones and qualified for NCAAs in all three diving events.

Stanford will have those three divers into the meet, and just missed adding a fourth. Freshman Julia Wortman was 10th today, and only the top 9 earned NCAA invites. But Paulsen and Lenz will both dive all three boards, and Sculti made the meet on both springboards.Hali_Helfgott, USC Athletics

USC had a great run this week on the boards. They have a meet-high four women into the meet, with Carly Souza taking second today. Souza, Naomi Gowlett and Nike Agunbiade were already invited before today, but all three now have platform to add to their entries. Agunbiade will dive all three boards, while Gowlett and Souza will dive two apiece. Savannah Stocker joined the roster today with a 6th-place finish.

Stanford All-American Noah Vigran waited until the last day to punch his ticket to NCAAs, but he’s in after winning platform.

Vigran was 6th at NCAAs last year on 3-meter and also scored on platform. But through two days of Zone competition, he was on the outside looking in with an 8th-place showing on 3-meter. Vigran took care of business on the final day, though, winning platform by almost 50 points and booking return NCAA trips in both events.

Stanford also added freshman Ethan Foster, who was the 5th of 6 divers invited on platform. They’ll now have three divers at NCAAs, with Conor Casey set to compete on both springboards.

USC’s Georgii Korovin was second, adding a third event after sneaking in on 3-meter the first day.