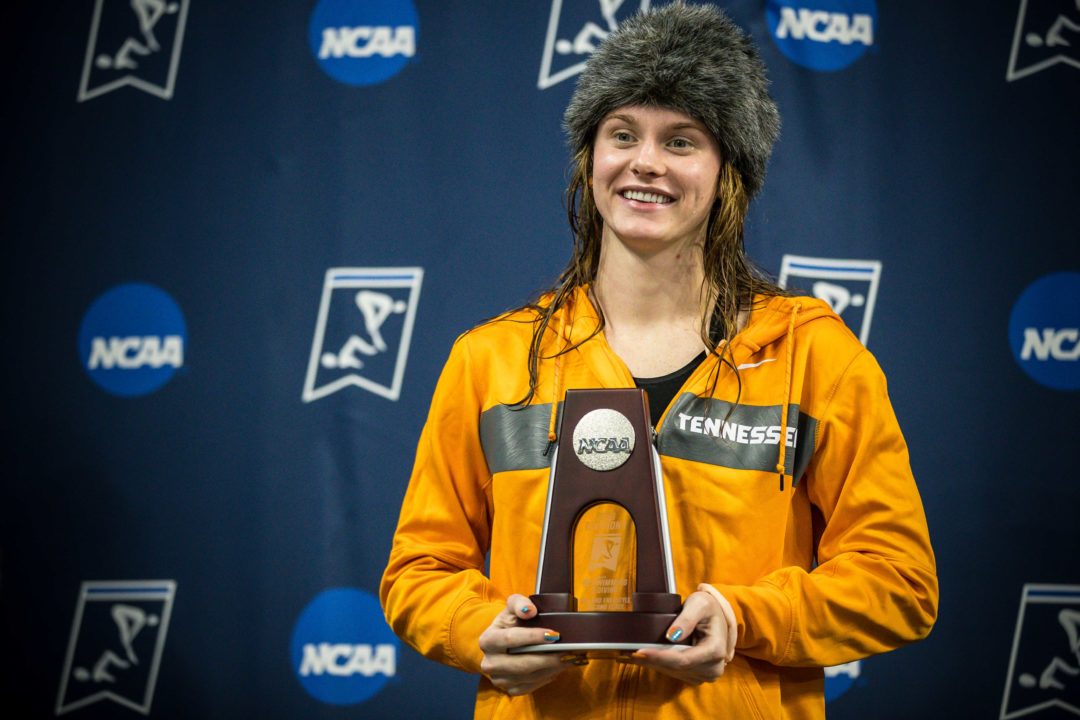 Erika Brown was the only woman to break an American Record in the yards pool in 2020, and she climbed to 2nd on the all-time list in two more races. Current photo via Jack Spitser/Spitser Photography

In 2020, only one woman broke an American Record in the short course yards (SCY) pool: Erika Brown of the University of Tennessee. Though Brown missed the NCAA and U.S. Open Records when she reset the American Record in the 100-yard butterfly, she still accomplished something no other woman did this calendar year. Brown also inserted herself among the top-10 fastest performers all-time in three more races.

Despite Brown’s incredible swimming at SECs, other women were strongly considered for this award–in fact, Jared, Braden, and I had to talk it over to determine who, in our minds, out-performed the rest. In 2020, Brown became the 2nd-fastest performer all-time in both the 50 and 100 freestyles, the 3rd-fastest ever in the 100 butterfly, and the 10th-fastest ever in the 200 freestyle. Going into NCAAs, Brown held the top times in the nation in the 50, 100, and 200 freestyles and was ranked 2nd in the 100 fly. Though she did not swim the 200 free at SECs, Brown posted a 1:41.66 at the 2019 Tennessee Invite, a mark that survived all of conference season, though she did not enter it at NCAAs.

Brown was the only woman other than Abbey Weitzeil of Cal to break an American Record during the 2019-2020 season. She slipped under Kelsi Dahlia‘s mark in the 100 butterfly with a 49.38 at the 2020 SEC Championships, though she fell just short of MacNeil and Hansson’s time (49.26) which remains the NCAA and U.S. Open Record. Brown was on fire at SECs where she posted a 21.03 in the 50 freestyle, making her the 2nd-fastest all-time behind only Weitzeil. She also swam a 45.83 in the 100 freestyle, again elevating her to the 2nd position all-time and making her one of only two women ever, alongside record holder Simone Manuel, to go sub-46 in the race.

In the process, Brown won head-to-head victories over Anna Hopkin, another legendary ‘all-time’ type of female college sprinter in a golden generation of them in NCAA swimming.

Each of Brown’s swims at the SEC Championships registered as SEC Records and contributed to Tennessee’s first-ever conference title. Brown also helped the Volunteers to SEC titles in the 200 free relay, delivering a 20.57 split as the anchor, the 800 freestyle relay, and the 400 medley relay. Accordingly, Brown was named the 2020 SEC Female Swimmer of the Year.

Good article, it just goes to show what we missed by not having an NCAA championships this past year. Frustrating for us fans, let alone the swimmers themselves. All five of the women you mentioned would likely have broken records.

BTW, does the 2020 NCAA Swimmer of the Year refer to the calendar year or the 2019-2020 NCAA season? You’ve mentioned both Brown’s 200 free from the 2019 Tennessee invite and Douglass’ times from this past fall. (It should be one or the other.)

I agree…pick one. Because clearly if all 19-20 season was considered it should go to Weitzel or MacNeil who swam NCAA records. But if it counts both (end of 2019 and the rest of the 2020 season) it should go to MacNeil who also had a great B1G champs

Yeah, this is weird. It seems the NCAA season is 2019-2020, not just the spring of 2020. Weitzel had the top 50 time going into NCAAs. If we’re counting just all of 2020, Douglass should be the winner with her performances. Brown/Weitzel swam a couple months in 2020 and graduated.

If you take their performances from the beginning of 2020 and compare it through all of 2020 they still outshine Douglass by quite a bit.

She would still be behind Brown/Weitzel in the 50 Freestyle, 100 Freestyle, 200 Freestyle and 100 Freestyle. The only event she would be faster than them in is the 200 IM. I don’t see the lack of understanding

Well she beats them in the breaststroke’s, flys, backs! SHE SHOUKD OF WON

Her development has been fun to watch!