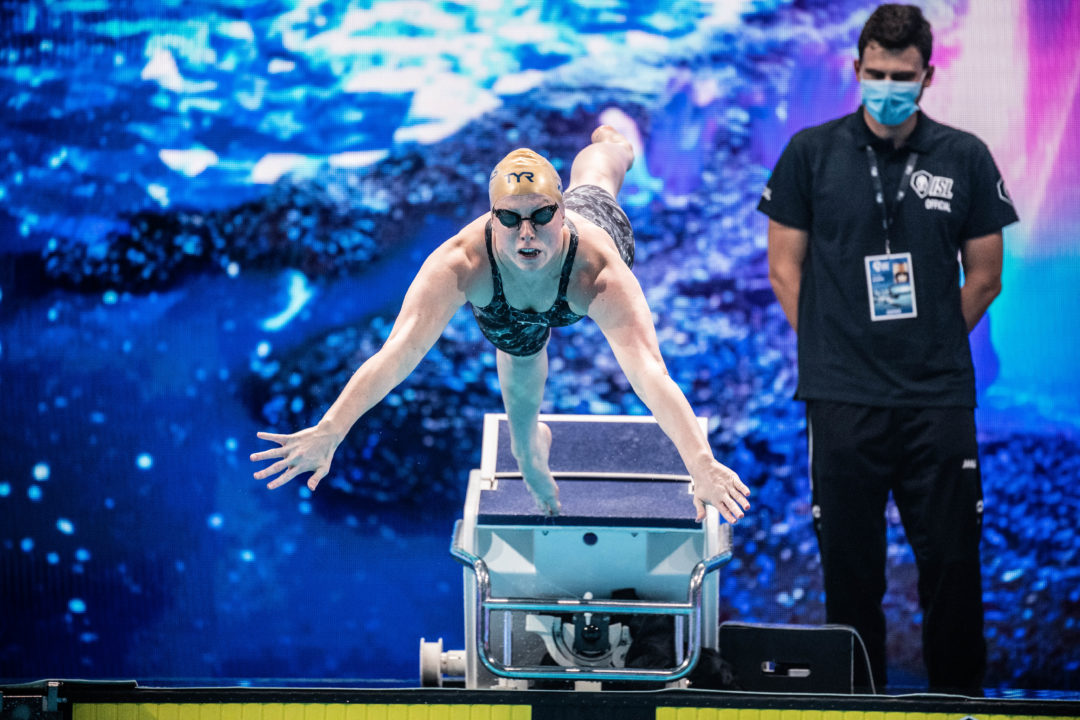 The first match of the 2020 International Swimming League season is in the books and Cali Condors’ Lilly King was all alone at the top of the MVP standings. King earned 87.5 points over the two-day contest, leading second-place Ryan Murphy of LA Current by 13 points. Energy Standard’s Sarah Sjostrom, the MVP for the 2019 season, trailed King by 21 points.

King has never lost a race in ISL. She won all her individual events and all the medley relays she swam last season. And she kicked off 2020 with individual event wins in the 50 breast, 100 breast, and 200 breast. She also snagged another gold in the women’s 400 medley relay. What put her ahead of the prolific Sjostrom, however, were the skins race and the jackpot points King stole from competitors who did not meet the time differential. In 2020, the team that wins the medley relay gets to choose the stroke for the skins contest. CAC chose breaststroke and they shut out the three other teams with two entrants -King and Molly Hannis- in the final. King won all three rounds of the 50 breast skins, and with tons of jackpot points.

Murphy’s results were similar to King’s. He won the 50 back and 100 back, was runner-up in the 200 back, was on the winning medley relay, and won all three rounds of the 50 back skins contest. His performances earned him 74.5 MVP points, corresponding to a $6,000 bonus on top of the $22,000 he took home in race winnings.

* Note: for MVP calculations, the points scored in the skins rounds are divided in half.

Sarah beat Lily if you ignore the skins. Plus Lily got 24 points for her 100 breast alone due to jackpot. Sarah did 9 events which is amazing really. Don’t get me wrong, they are both amazing. I just hate the jackpots. As someone else said, poor Molly got her points And money “stolen” by her teammate. Seems rough.

Plus Imogen Clark came 4th in the second round of skins, and ends up with less points then the person who came 5th in the first round of skins ? What the ?

This is not true. Imogen Clark scored 5 points, while Emily Escobedo scored 4.

Jackpots increase the value of breaststrokers and single stroke specialists.

It isn’t a good or bad thing, it is just different.

I like it. Increases the importance of having a strong roster overall instead of it being all about the small handful of versatile elite swimmers like Sjostrom and Dressel.

Lily King completely destroying everyone is no less impressive.

last year dominant swimmers like King or even Ledecky who is the greatest distance freestyler would not be as valuable because though they win by a lot, their value is underrated because they only get 9 points: same as someone who wins by 0.01 seconds even if they try their best and win by 10. though i love the jackpot, maybe jackpot for skins should be reduced/nerfed

Hannis only got points “stolen” but they stayed within the team….

She earned all her placement money. The athletes who get jackpot-ed only applies to points… Not money earned

Silent Observer – while many of the athletes were under the same impression as you, today we specifically asked ISL, and they said that money is stolen as well.

So, that’s the best available information at the moment.

It was the owner of Energy Standard/ISL that came up with the change and add the Jackpot, so it is her own boss that is behind it.

Sjostrom was incredible, it’s definitely strange to see her 21 points behind King (who was fantastic !).

Skins…this will be kind of unfair moving forward. Cali has the best women’s team and will probably win the relay, and because breaststroke is their team’s big strength and they will probably choose it, every time Cali is in the meet they will pick breast for women’s skins and King will almost always get a big role. So, because some teams just have better rosters than others and are more likely to win relays, it could be kind of boring and unfair in terms of skins, because teams are always trying to do their best.

I kinda like the idea that a winning team can play to their strengths to decide which stroke they want to race for skins. Kinda unfair it’s always free. I like the variation in ISL compared with the Olympics or Worlds.

i also found it unfair last year that only sprint freestylers could get extra points. that really boosted standard. this year it’s more about depth in each stroke and i like it

Awesome! Thank you to Lily for carrying on the greatness of Indiana University and the GOAT, Coach Ray Looze! We’re proud of you and I’m going to wear my Ray Looze “Coach of the Year” t-shirt on my date tonight! God bless Indiana University!