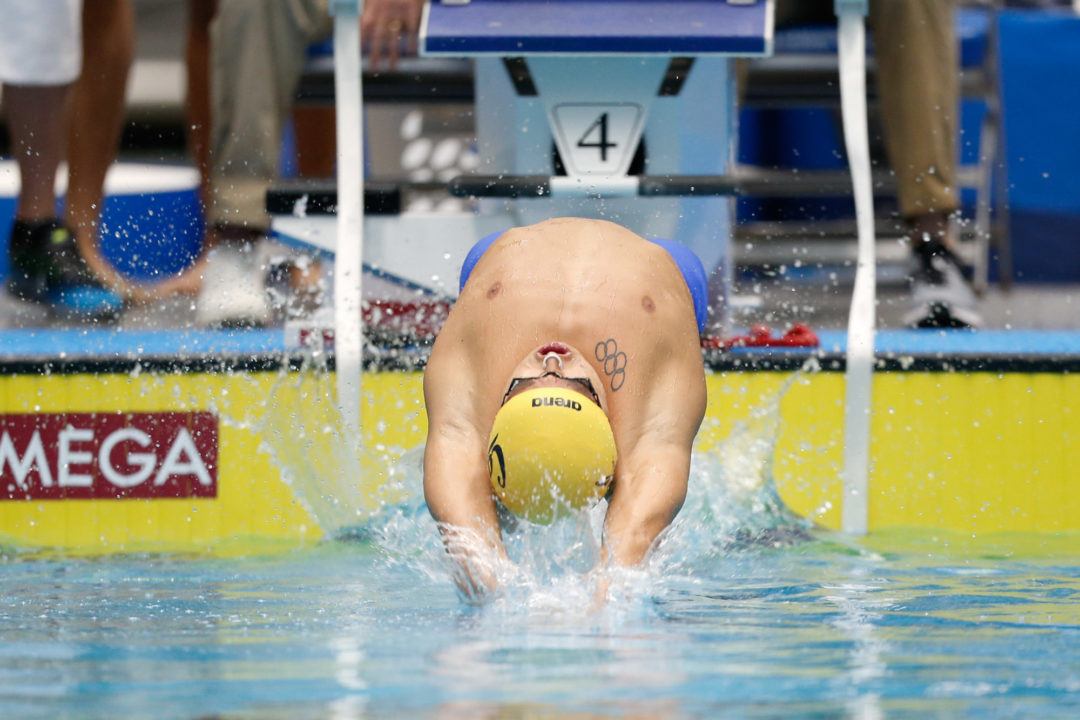 Another interesting aspect of today is the brewing team battle between USC and Utah for 5th place. The Utes only are lagging behind the Trojans by 38 points going into today, and with that margin, anything is poosible. Stock photo via Tim Binning/TheSwimPictures.com

Heading into the final day of competition, Cal has a firm hold on the title this year. Having qualified the most scoring swimmers to finals in the previous two days, there doesn’t appear to be any reason to think today will be any different. In our continuing saga of Andrew Seliskar‘s event selection for this meet, the Cal star has chosen to swim the 200 breast today. There was some question as to whether he would do the 200 breast or 200 fly, since he excels in both, and Cal is deep in both. That doesn’t necessarily mean he’ll do the same at NCAAs in a few weeks, as that decision probably hinges partially on the results from this meet.

We’ll get to see Reece Whitley swim the 200 breast today after two good performances in the 100 breast yeasterday. Zheng Quah is potentially the favorite to win the national title in the 200 fly, and we’ll get to see him race that here as well.

Top seed Patrick Mulcare (USC) finished outside the top 8 this morning, coming in 11th with a time of 1:42.75. He will be swimming in the B final tonight. Stanford got the ball rolling early today, qualifying 3 swimmers to the A final tonight, the most of any team. Arizona junior Thomas Anderson dropped nearly 3 seconds off his season best to qualify 5th for tonight. Similarly, Stanford sophomore Glen Conward dropped roughly 2.5 seconds to make it into the A final 7th.

Stanford got another 2 swimmers into the B final tonight, while Arizona picked up another 3 scorers in the B final.

The Cal sprint group made it throguh again, with the charge this time being led my junior Michael Jensen. Ryan Hoffer qualified 4th, and the 50 free champion from Thursday, Pawel Sendyk, made it in 8th this morning. Of note, none of those three Cal swimmers posted season bests this morning. Nate Biondi, another Cal swimmer who made the A final of the 50, came in 13th with a 43.74 this morning, and will be swimming in the B final tonight.

Utah got two swimmers into the A final tonight, led by Austin Phillips. Phillips, who has had a great meet thus far, shed 0.23 seconds off his season best this morning, earning the 3rd seed for tonight. Liam O’Haimhirgin, earned himself the 6th seed tonight thanks to a huge 1.84 second drop from his season best. Morevover, the Utes qualified Rodolfo Moreira to the B final. This gives them the early edge over USC, who they are battling for 5th in the team standings currently. The Trojans only qualified one scorer in the 100 free – Nikola Miljenic, who was 5th this morning.

Reece Whitley and Andrew Seliskar have set up what should be a really fun race tonight in this event. Seliskar does hold the meet record at 1:51.30, significantly faster than either swimmer were this morning. Additionally, Seliskar has been swimming faster in finals than prelims by a decent margin this weekend. Stanford and Cal each advanced 3 swimmers to the A final tonight, while Arizona picked up the other two spots. Notably, 100 breast champion and new meet record holder Carsten Vissering came in 20th this morning, swimming a 1:59.77. Along the same lines, Carson Sand, a B finalist at NCAAs last year in this event, was also relegated to the C final tonight after a 1:59.27

The Pac-12 meet record holder Zheng Quah came out on top this morning, almost exactly 3 seconds off his season best of 1:39.29. Quah has swum prety much right at his season bests so for this meet, so it seems there’s a good chance he’ll be back under 1:40 tonight. Cal picked up 3 other A finalists, being Trenton Julian (2nd), Mike Thomas (4th), and Jack Xie (6th). Thomas was seeded 2nd in this event, and similar to Quah, was exactly 2 seconds off his season best this morning.

Arizona continued to rack up A finalists, notching another two for tonight, Brendan Meyer and Mathias Oh. Jack LeVant notably just missed out on the A final, coming in 9th with a time of 1:44,83. That time comes in 1.43 seconds off his season best.

Has Sancov or Valente qualified for ncaas? I think they are on the bubble, at best, and making c finals isn’t promising….

Cal has 3-4 A-finalists in almost every event. Sheesh.

Yeah if you’re gonna come into the meet with a huge beard, ya kinda have to at least final in your events to back that up lol. A beard at conferences is only alpha if you actually win your events with it.

When USC recently got beaten up pretty well in consecutive duals with Cal and Stanford, I thought “oh well” they are aiming for the PAC12 Championships. So I guess the duals were no fluke, and it is hard to believe with the talent they have that they performed as they have.

I would argue most of the talent is performing pretty well with the exception of Sancov (I think Mulcare will perform at NCAAs based on his track record). USC just has a really small roster.