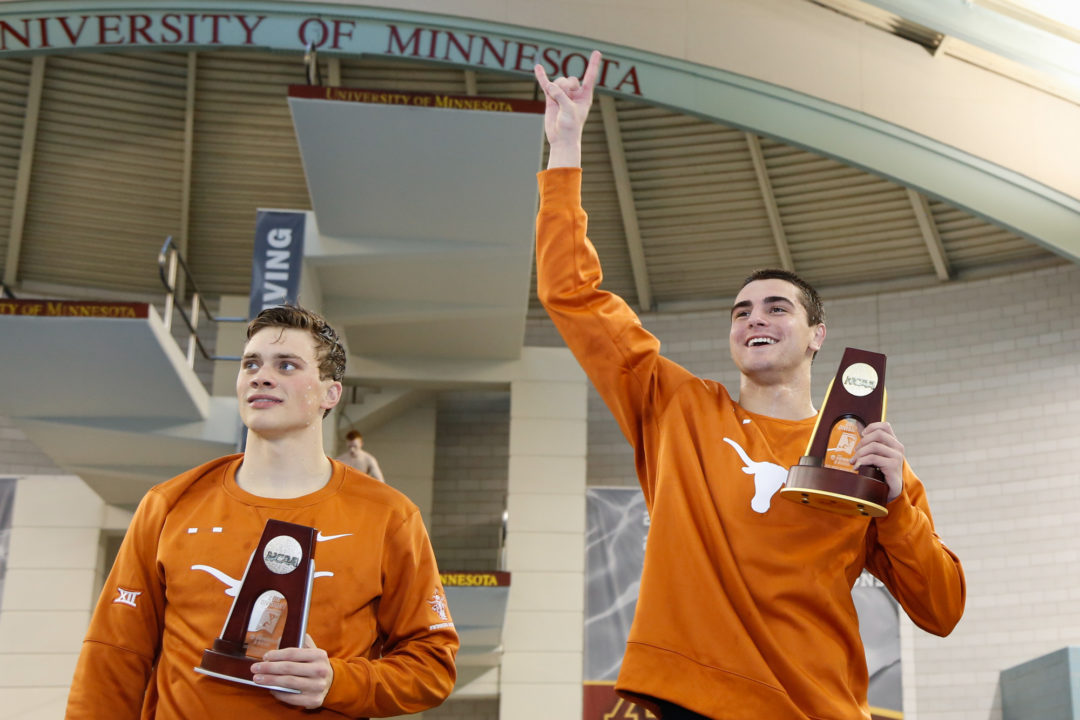 Texas went 1-2 at last year's NCAA Championships in the 200 back; but this year, a different Longhorn has the top seed. Archive photo via Tim Binning/TheSwimPictures.com

At last year’s NCAA Championship meet, University of Texas freshman Austin Katz led 3 Longhorns in the top 5 of the men’s 200 backstroke at the NCAA Championships, coming away with a title and a new Pool Record in the event.

That race, where the Longhorns scored 54 points last year, was where Eddie Reese’s squad really set the tone for the final day of the meet, which was a much closer finish than we usually see at this meet (decided by 12.5 points). This year, the Longhorns project to do better than their 0 200 breaststroke points from last year’s NCAA Championship meet, but Texas still needs big points out of this 200 back to cover for an overall scoring weakness on the final day of the meet.

While Texas is the favorite to win the 200 back this year, just which Longhorn will be on top of the podium is open to debate. Katz is the defending champion, but then-junior John Shebat finished 2nd last year in 1:37.94, .41 seconds behind Katz, in spite of missing much of the season with an injury.

And then there’s Ryan Harty, who was 14th at NCAAs last season, but is the fastest swimmer in the nation this season thanks to a 1:38.61 from the Big 12 Championships.

Knowing where the Longhorns are is always a challenge given their lack of any real competition at the Big 12 Championship meet.

USC’s Patrick Mulcare, now a senior, was 3rd at NCAAs last year in 1:38.43 (and was the top non-Longhorn finisher), and was 3rd a year earlier. He was fast mid-season in the 200 back, swimming 1:39.18 at this same University of Texas pool in early December.

Much like Texas, he’s a bit of an enigma. He was way off at Pac-12s: sporting a sprawling bright-red beard to emphasize that he wasn’t shaved for the meet. He was only 10th at the conference meet in the 200 back, and didn’t even final in the 100 back or 200 IM. His 200 IM time of 1:50.02 was actually slower than he’d been in all-but-one dual meet during the season. In fact, his season dual-meet best, against Utah in  late February, was almost 7 seconds faster than he swam at Pac-12s.

We’ve seen this sort of a strategy work in the past, and we’ve seen it blow up in athletes’ faces. Last year, he didn’t even swim Pac-12s last year. The year before, he swam fast at Pac-12s. In both cases, he was 3rd. New year, new strategy, but repeating a 3rd-place finish against this deep field will be tougher-than-ever.

Two spots have opened up in this A final: Stanford senior Abrahm Devine, who was 8th at NCAAs last year, is swimming the 100 free on day 4 of the meet instead; so too is last year’s 7th-place finisher Dean Farris. That means that in spite of few graduations, only the top half of last year’s A final returns.

Other Returning Scorers from last year, and their seeds:

B-finalist Mohamed Samy has also chosen the 100 free, but that doesn’t leave the Hoosiers without a big scoring threat. Sophomore Gabriel Fantoni has made big gains in his 200 back this season, swimming a 1:39.53 at Big Tens that puts him 1.3 seconds ahead of where he was last season. He wasn’t able to drop time at NAAs lasst year, however. Arizona State’s Zach Poti (1:39.88), Florida’s Clark Beach (1:39.95), and Missouri’s Nick Alexander (1:39.88) have also been sub-1:40 already this season. All three swimmers were close to their seed times at NCAAs last season, with Poti and Beach dropping a little, but Alexander adding a little. Last year, though, his season-best was at a last chance meet, while this year he did that mid-season and presumably was able to train through the end of the regular season without having to chase a cut.

There’s one really surprising name at the top of the psych sheets: Tennessee senior Joey Reilman (Michael on your scorecards). He’s already dropped 1.3 seconds from his lifetime best this season, and is 3rd in the country coming into this meet with a 1:38.97. Last year, he was 25th at NCAAs, right on his seed time from SECs. If he can do that again, he’s got a top-5 finish in his sights.

So with so much data missing, how do we decide on a winner? The best I could come up with was to go back to the last known data point: last year’s NCAA Championships. If Shebat can finished 2nd in this event after missing time with an injury, it’s hard to not give a healthy Shebat the benefit-of-the-doubt, as a senior, in a home pool.

As a Longhorn fan, I’d be thrilled with any manner of 1-2 finish, but I predict Austin Katz has been pacing himself this season, and will succeed in defending his 200 Back title!

Texas sweep seems possible which is pretty cool. Although, I really Mulcare could completely rip this race apart. My most anticipated race easily.

I call Cam Tysoe from Wisco sneaks into the final, kid has been dropping time like crazy and still has a year to improve.

Shebats wins 1:36, Coleman 2nd and Katz 3rd with a close finish in between them two

The winner will be from Texas. Katz, Shebat and Harty are all potential champions.

But if I have to pick one, it’s Austin Katz.