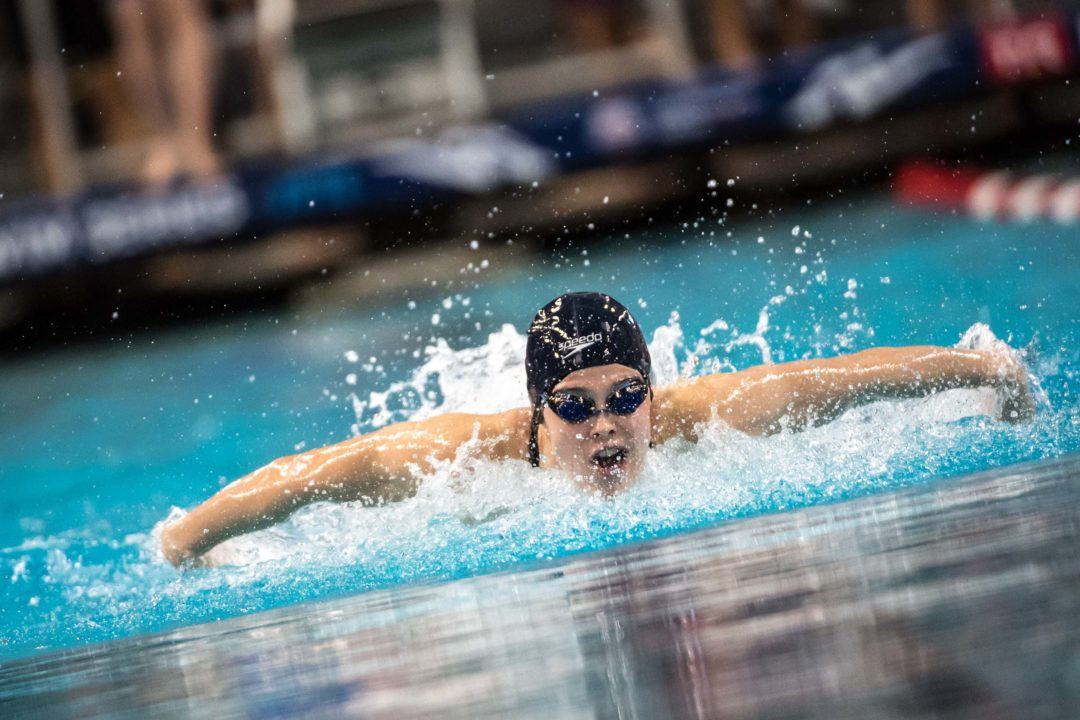 New Trier has set themselves in a great position for the team title, yet will have 2018 champion Neuqua Valley, Oswego East and Metea Valley on their tails. Stock photo via Mike Lewis/Ola Vista Photography

The Illinois High School Girls State Series is officially underway with the completion of the sectional meets. This weekend will be the IHSA State Championships, which will take place at New Trier, where the Neuqua Valley girls will contend to defend the 2018 title, their first-ever state title.

Below is this full list of qualifiers for the state finals. For those not familiar with IHSA format, each school is only allowed 2 swimmers per individual event at the sectionals meet, maintaining 2 events plus a maximum of 2 relays per swimmer.

At the state championships, only the top 12 will advance to finals, with 12th-7th place in the consolation final and 6th-1st contending in the championship final.

Scoring out the psych sheet, host New Trier looks to be in great position for being a top contender for the championship title. St. Ignatius, after finishing 18th last year, scored to place second with all three relays in top-6 contention. St. Charles North, Oswego East, and Metea Valley are also in position to defend their top-8 team finishes last year alongside 2018 team champion Neuqua Valley.

Leading New Trier is Carly Novelline, who will swim both the 100 free and 100 back. Novelline sits in first in the backstroke with a 55.34, a half second ahead of Rosary’s Jessica Geriane (55.80) and defending champion Megan Armstrong (55.84) of St. Charles North.

In the 100 free, Novelline joins a talented field including World Junior team member and defending champ Grace Cooper of Oswego East. Both swimmers are ranked in the top 6 behind top seed Sally Ma of Urbana U-High. Cooper will also aim to defend her 50 free state title, where she is ranked second at 23.20. Ma is also top of the 50 free at 23.17.

As mentioned earlier, New Trier teammate and defending 100 breast champ Kaelyn Gridley could have some stiff competition as she sits in second behind sectional champion Mundelein’s Adry Kasemets. Kasemets’ top time is a 1:01.85, which is a full second ahead of Gridley (1:03.01). Last year, Gridley won the event with a 1:02.68, however, her lifetime best stands at 1:01.64.

World Jrs medalist in the 400-meter free, Rachel Stege (Neuqua Valley), will aim to defend her 500 free state title and record along with picking up another win in the 200 free. Stege sits in first in both events, yet has mid-distance contender Annika Wagner of Maine South right on her tail.

For Metea Valley, McKenna Stone made a bold event change-up and has opted out of the 50/100 free, where she was the state runner-up in both events, and will swim the 100 fly and all three relays. Luckily for Stone, she leads the fly with a 54.07, nearly a second ahead of Naperville Central’s Paige Collins.

Notably scoring a bit low on the psych sheets are Lyons Township (Lyons) and Barrington, who finished 5th and 6th last year. Both teams currently do not have any relays ranked within the top-12 after the sectionals bout. However, last year both programs advanced all three relays to finals.

Lyons senior Callahan Dunn is the top returner in the 200 IM after placing 3rd last year in the event. She is currently ranked outside the top 12 with a 2:06.29, with her lifetime best sitting at 1:59.50, well below the IHSA state record.

The IHSA state championships are set to take place at New Trier High School on November 22-23. Prelims will begin at 3:30pm CT on Friday and the state finals will take place at 11:00am CT the following day.

Looks to be a battle between New Trier and Neuqua. NT has home pool and great medley, and leads on psych sheet. Keys will be diving, as both teams have 2 that may score, and Neuqua’s medley relay as it looks to be the lowest scorer of the two teams’ relays.
200 Free should be epic between Stege and Wagner.
Kudos to Wagner for throwing down the challenge and to McKenna Stone for being the team player with 3 relays.