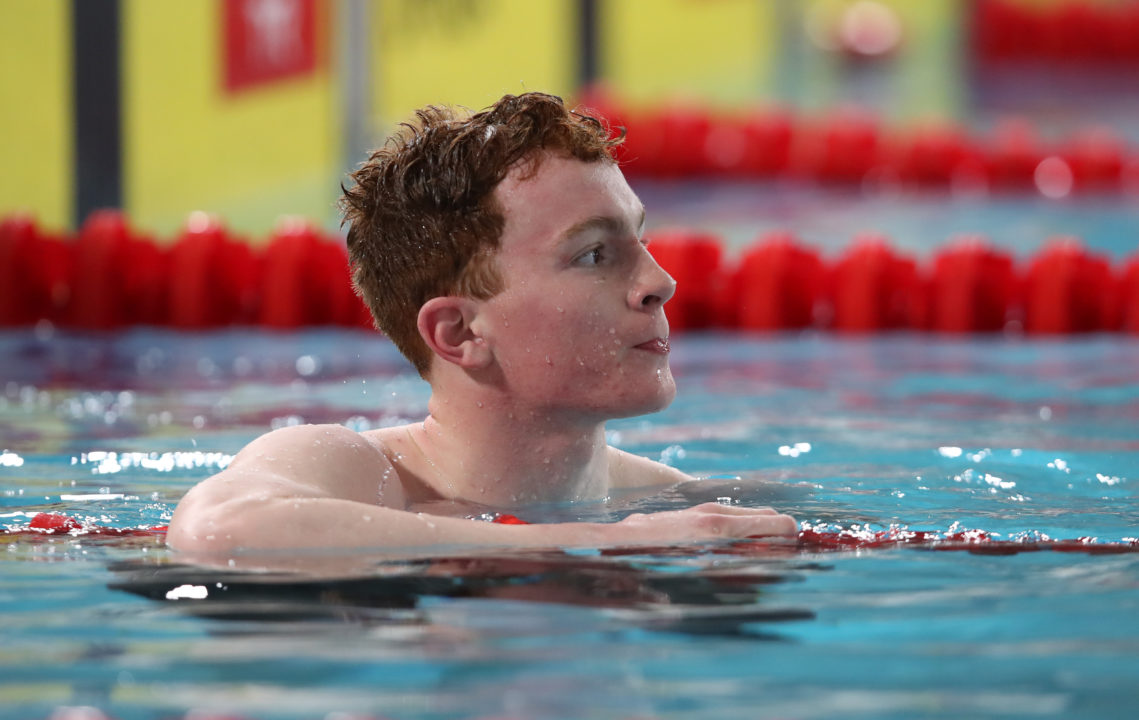 18-year-old Brit Archie Goodburn whipped out the best time of his young career in the men's 50m breast to lead the pack out of the prelims. Archive photo via Ian MacNicol for Scottish Swimming

Day 3 of the 2019 European Junior Swimming Championships set-up some terrific semi-finals for tonight’s session, starting with the women’s 50m backstroke.

The 200m back gold medalist here, Erika Francesca Gaetani, was back at it this morning, taking the top seed in the furious 50m sprint in a time of 28.50. That’s already .33 faster than her lifetime best of 28.83 that she clocked about a year ago.

The 14-year-old was just 28.92 at the Italian National Championships back in April, a time that rendered the teen in 4th place overall, so Gaetani is making major strides in a short time span in this 50m back event.

But Israeli standout Anastasya Gorbenko is hot on her trail, putting up a time of 28.56 this morning to claim the 2nd seed while also coming within .05 of her nation’s senior record.

Last year’s gold medalist in this event, Daria Vaskina of Russia, is also well in the mix, putting up a time of 28.63. She is simply biding her time, however, having already clocked a wicked-fast mark of 27.74 at the Russian Nationals this year. That clears her 27.90 Championships Record that took gold in Helsinki, so look for her to be a big-time player tonight.

Additional women moving on to tonight’s semi-final include Belarusian multi-event weapon Anastasiya Shkurdai, who hit a time of 29.14 for 8th seed, while Giulia D’Innocenzo of Italy is seeded 9th, tied with Britain’s Medi Harris, in 29.18.

18-year-old Archie Goodburn whipped out the best time of his young career in the men’s 50m breast to lead the pack out of the prelims. The Warrender Baths athlete produced the top seed in 27.85 to represent just 1 of 2 swimmers under the 28-second threshold this morning, Goodburn’s first time ever doing so.

Goodburn’s previous PB rested at the 28.04 put up at the 2018 British Championships, but his morning effort here in Kazan now ranks the teen as the 17th fastest Brit ever in the event, with both the semi-finals and finals yet to swim.

Russia’s Vladislav Gerasimenko took the gold in this event at last year’s edition of the Championships, hitting a time in 2018 of 28.03. As such, both Goodburn and he have been faster already, with the Russian collecting the 2nd seed in 27.97.

Also in the semi-finals for tonight are Caspar Corbeau and Aleksandr Zhigalov, 2 of the 3 medalists in last night’s 200m breast final. Corbeau of Netherlands took silver to Zhigalov’s gold last night but here this morning it’s Corbeau who sits 4th in 28.39 with Zhigalov in 6th with a time of 28.49 for now.

Russian Polina Nevmovenko took the pole position in the women’s 200m free, establishing herself as the leader in 2:00.71. Behind her are Spaniard Ainho Campabadal Amezcua and fellow Russian Aleksandra Bykova who secured 2nd and 3rd seed in times of 2:01.12 and 2:01.27, respectively.

Freestyle ace Isabel Gose of Germany wreaked havoc on the podium last night, earning gold in the 400m free, the 100m free, as well as via a member of her nation’s 4x100m mixed free relay.

The 17-year-old is holding fast as the 4th seeded swimmer here in 2:01.98, no doubt conserving as much energy as possible to move forward each round while expending the minimal amount of energy.

Gose is the reigning 200m free European Junoir Champion in 1:58.17, her lifetime best, so let’s see if the German can venture into sub-1:58 territory before all is said and done.

British youngsters Tamryn Van Selm and Mia Slevin are further down the list, but still made the semi-finals, hitting in times of 2:02.65 and 2:02.75, respectively.

14-year-old Van Selm, one of SwimSwam’s Swimmers to Watch heading into Kazan, finished 8th in the senior final of this event at this year’s British Championships. Her time of 2:01.56 there will need to be lowered big-time to make the final, but Van Selm is looking for redemption after a rocky race in the women’s 100m free final that saw the teen finish 8th in 56.22 when she’s proven she is capable of much more than that.

Do we know why GB was DNS on the 4×200 this morning? I had them as a sure fire medalist in that one…

My guess is tonight’s schedule; Mildred has 200fl final, Whittle & Richards 100fr, Goodburn 50br semi’s & finals, and Osborne looked way off in his 400fr. They’ve all already had long weeks, Whittle looked knackered last night after the relay, probably just thinking about the rest of the week.

Surprised at the 200 back times. I suppose there are still semis to go too .