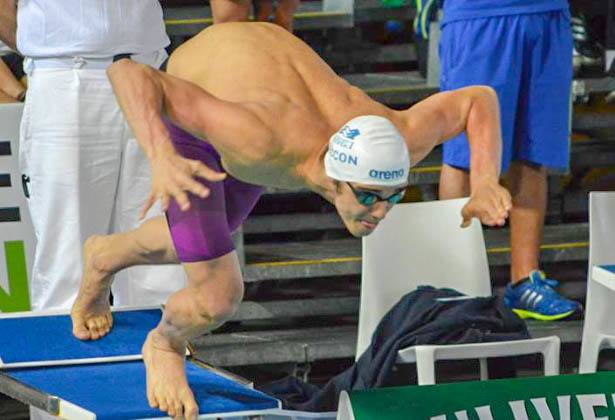 Thomas Ceccon of Italy put up the fastest split of the men's 4x100m free relay last night (48.17) and looks to do more damage individually in Kazan. Archive photo via Marco Razzetti

Day 2 of the 2019 European Junior Championships has several thrilling races brewing, as evidenced by this morning’s quick swims. Entering this morning’s heats, Italy has a slight lead in the overall medal table, but Switzerland already has 2 gold medals to its credit, with the 2018 European Championships team leader Russia lurking in the distance with a loaded arsenal ready to pounce.

This morning in the men’s 100m free, Italy’s Thomas Ceccon staked his claim on the event with a solid AM swim of 49.60. The 18-year-old threw down a massive 48.17 split on the men’s silver medal-winning 4x100m free relay last night, so we know the multi-Youth Olympic Games medalist has more in the tank.

Behind him this morning was Matthew Richards, the British free and fly ace who already matched Ben Proud’s Age Record in the men’s 50m fly in yesterday’s prelims. Although he missed out on that event’s final, the 16-year-old is ready to make his mark on this 100m free event, snagging the 2nd seed in a new lifetime best of 49.91.

Also among the men moving on to tonight’s semi-final include Antonio Djakovic of Switzerland, the man who nailed a new Senior Swiss Record en route to gold in the 400m free.

Swedish standout Robin Hanson, one of SwimSwam’s Euro Juniors to watch here, is ranked 10th, while 14-year-old Jacob Whittle cruised to the 11th seed in 50.65. For Whittle, the 14-year-old crushed a prelims split yesterday of 49.79 with a .62 takeover on the British 4x100m free relay, so the man is on a mission to keep the momentum going here.

But it’s early, with 2 more rounds to go for the top swimmer entering this meet on the start lists, Russia’s Egor Pavlov, to surge ahead. He owns the quickest personal best of the field by well of 2 seconds in 1:56.81.

British teen Edward Mildred already smashed his own personal best of 2:01.65 to rocket up from 15th entering the meet to claim the 4th seed, so keep an eye on this hungry athlete.

Hoping for 3 german gold medals tonight, will be another crazy session for Gose if she swims in the mixed relay … first the 400 free final, then 40 minutes later the 100 free final and then about an hour later the mixed 400 free relay final. She should have enough air in the 400 free to win gold without going all out, but i still don’t see her holding off the russian girl in the 100 free final.
So far i am very disappointed by Artem Selin, he was miles of his PB in the 100 free this morning and i don’t see a reason to believe that he will be able to turn it around for the… Read more »

I might be wrong but I think that’s the fastest closing 50 of the field. Obviously since it’s the heats it’s not as significant, but it’ll be interesting to see if this statistic holds up in the semis. These might be the first young British sprinters since Duncan Scott to look really really impressive (and to think he only truly started to become mostly a freestyler at about 18!).

I agree, very impressive bunch. Think McLay will develop into a good sprinter too.

The one who has really caught my eye is actually Archie Goodburn. Dropped from 51.19 to 50.43 leading off the relay last night. Ordinarily, that’s nothing amazing, but he has a 28.0 50 breast and a 2.00.4 200 fly to his name! Noticed he has started swimming backstroke a lot more recently so I wonder if he might end up a 200IMer…

Do we know why Archie didn’t swim the 200IM here? He went 2:03 at the trials… Also no 200fly, where his 2:00.4 would have qualified him second today. As you say, very versatile and may be he’s swimming the breaststrokes here, but sure IM is his future.