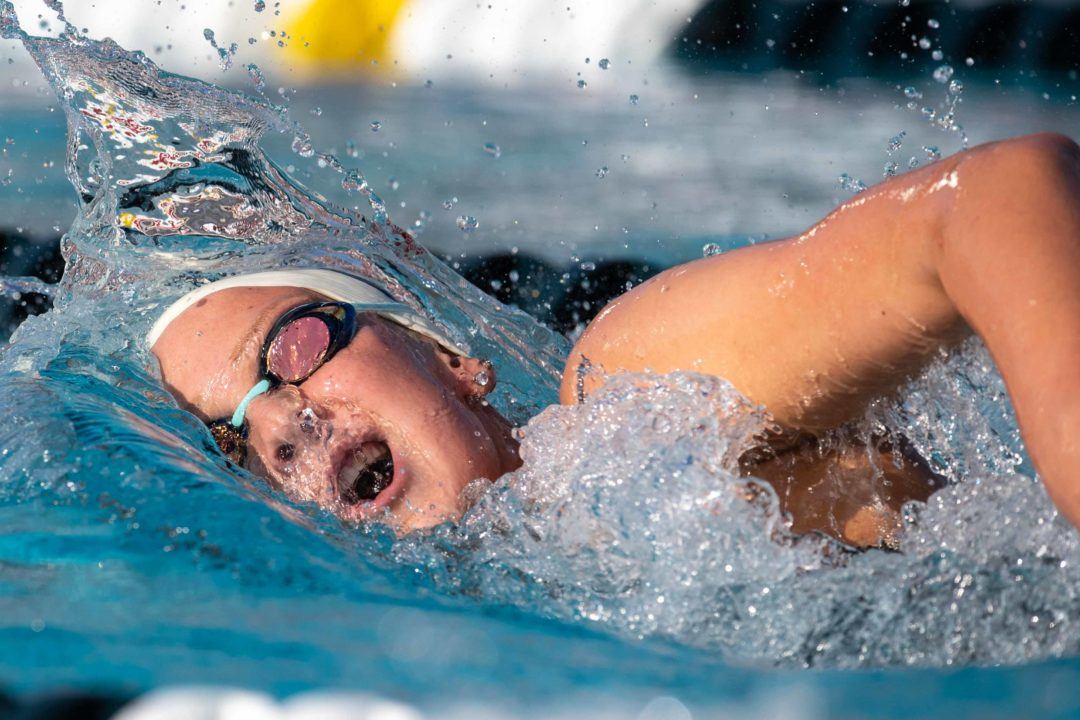 The 2019 CIF State Championship Meet will take place on Friday, May 10 (prelims) and Saturday, May 11 (finals) at Clovis West High School in Central California. This is the fifth edition of the California state meet. It is being held a week earlier than in the past, which may account for the increased depth of the field. The first all-CIF meet was held on May 22-23, 2015, which was the same weekend as Speedo Grand Challenge, typically the first big meet of the summer season for California swimmers. Many of the California club coaches weren’t too keen on their swimmers delaying the start of long course season by yet another week and, while there were several big names at the inaugural meet (such as Ella Eastin, Maxime Rooney, and Bryce Mefford), there were too many absences (eg, Abbey Weitzeil, Katie McLaughlin, and Grant Shoults) for it to be a true state championship.

There are some quick underclassmen in the boys’ meet.  Freshmen Tona Zinn of Laguna Hills and Matthew Chung of The Harker School are seeded 4th and 5th in the IM. Harvard-Westlake freshman Ronald Dalmacio is seeded 4th in the 100 back and 11th in the 100 fly.

Hands down the fastest HS meet in the country. It’s not even close.

Calvin and Ingram are from two different Foothill High Schools.

Maxime *was* at the Inaugural meet in 2015, helping Granada with 3 relays.

Unfortunately, the meet also coincides with AP exams. Doesn’t give those kids that put academics first the opportunity to swim at the state championships. Another reason the meet is not well attended. CIF needs to figure out the calendar or drop the meet altogether. Just another CIF money making event.

If kids are smart, they can do well on tests. They will have the same problem in college when meets are near midterms and so forth.

Hmmmm…. I wonder how a kid can both take an AP test and swim prelims at State on the same day. Any suggestions? Have you any understanding of how AP tests are scheduled? The AP US History exam is only given Friday at 8:00 AM, same time as prelims. And most top high schools don’t allow make ups. Of course the kids can study and do well on tests – that’s why they are taking AP’s in the first place. Kind of a silly comment. Why doesn’t CIF move it to a weekend only meet? The problem is that they are making kids choose between academics and athletics which should never be the case.

I guess an alternate question is ‘why don’t most top high schools allow makeups?’ I’m taking your word that in California they don’t – I went to a highly-rated high school in Texas, and they allowed makeups.

Or contact the meet directors ahead of time and ask if the meet can be pushed up a little bit?? It’s not that hard

Not that hard to reorganize a swim meet. You’re right.

Don’t understand why they couldn’t have a Sat-Sun meet. Simple solution

SocalSwim/Socal swim parent – please be sure that you’re adhering to our commenting policies and only using 1 username in each comment thread. Thank you.

NFHS rules, you can’t have any high school activity on Sundays.

My son’s district doesn’t. But again why do they have to choose? Kids shouldn’t have to take a make up. Academics should always come first – shouldn’t be missing AP exams for athletics.

Aren’t AP exams issued by a third party and not the high schools?

Not silly, they should have make ups. College allows make ups why not high school. Nothing is going to get schedule a 100 percent for everyone’s benefit and the schools are in error for not allowing kids to do make ups that are rank high in sports.

You’re kidding, right? Diving starts at 8:30. What about those kids? What about the kids who have the afternoon exam? What should the first priority of students be – academics or athletics? CIF holds this meet for one reason – the mighty $$. $10/$12 admission-, rights to FLO swimming etc. Their administrators are being paid well.That money is not going to the high school swimming/diving programs.

AP exams are taken at the same time across the entire country and they are very very regulated, not to mention that for most tests they are exactly the same from student to student. Wouldn’t the College Board have to make a completely new test just for these kids to make it up? They don’t allow test taking after the date the test is administered to prevent unfair advantages because info about the test will almost certainly be leaked to those kids

Cole – AP does allow students to take the exam at a later date. https://apcentral.collegeboard.org/ap-coordinators/exam-ordering-fees/late-testing

One more reason why HS Varsity Meets should be on Saturday and Sunday.

Unlike midterms, AP tests are almost impossible to makeup. They are only offered at one time and very few excuses are able to get you to makeup testing.

That simply isn’t true. If those policies exist, then it’s on the school, not the College Board (who creates the test). In fact, for a conflict with an athletic contest/event, the College Board doesn’t even charge more to take the test in the late testing period, effective this year.

Here’s a list of reasons that the College Board will allow for no-cost late testing: https://apcentral.collegeboard.org/ap-coordinators/exam-ordering-fees/late-testing

Yes, it’s true that it’s on the school and not on the college board. However, the reality is that many schools simply won’t go through the trouble to offer makeups (my highly ranked school didn’t because they didn’t want to deal with proctors and such) and it forces swimmers to choose one over the other.

Then I hope you’re peppering the schools with the same driving questions. There are dozens of other reasons why a student would have to reschedule a test – illness, death in the family, IB exams, religious holidays, natural disasters, multiple AP tests scheduled for the same date and time. By the same reasoning, the schools are forcing students to choose between “showing up for a test sick, risking infecting other students, and being forced to take the test under very stressful circumstances” and “not taking the test.”

Not true. CollegeBoard provides free late testing for students who are unable to take the exam due to athletic competition. I will be missing two exams for a USA Swimming meet and was allowed to reschedule my exams at no cost.

As a past hs swimmer and AP student, I would like to say that while my high school had makeup AP exams I chose to skip states last year to take my AP exam on the regular day. While making up an AP exam is offered for free, I chose to take it on the normal day in order to be stress free rather than having to stress about swimming as well as studying for an AP exam.
I would also like to point out that CIF and CIF States have both already been pushed back a week this year and pushing it back another week would make most swimmers uncomfortable with the quick turn around time between a… Read more »

I believe Ethan Hu is a Junior

Yes, several of the grades are wrong for swimmers across all the events. My kid is a sophomore, but listed as a freshman. I’m assuming this will be corrected tomorrow.

Yes, I also found quite a lot of swimmers with wrong “Year” listed on the psych sheet. Hope all schools can check and update accordingly.