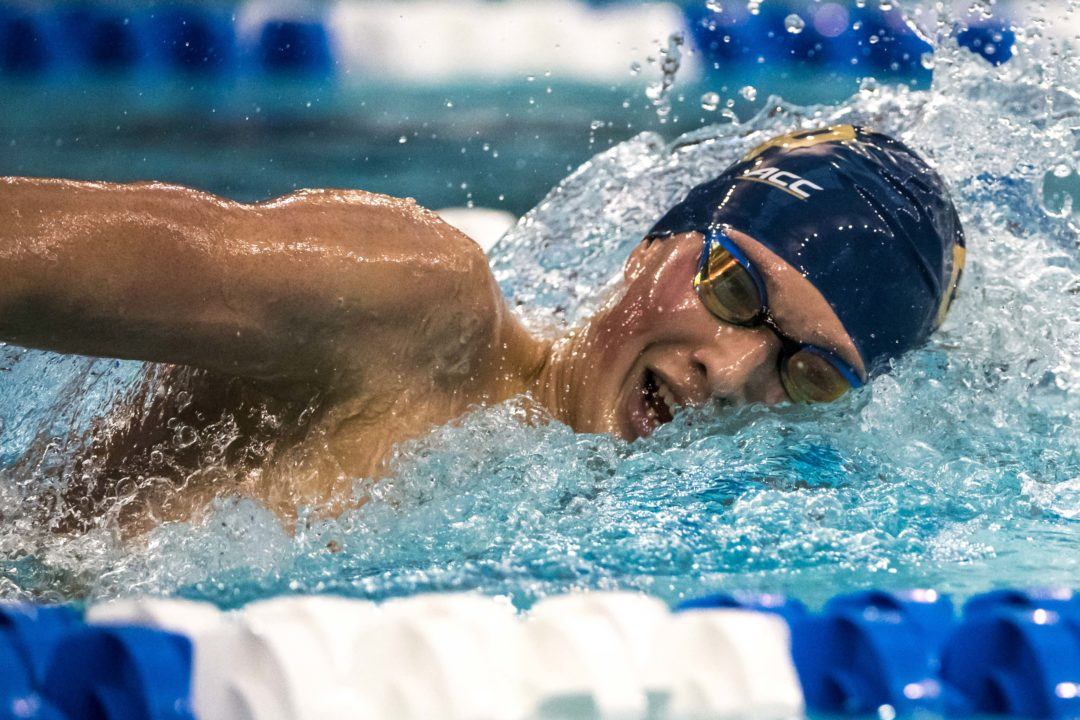 The first full day of the 2019 ACC Men's Championship will feature the 500 free, where last year's runner-up Zach Yeadon holds the seed, along with the 200 IM and the 50 free. Archive photo via Mike Lewis/Ola Vista Photography

The first full day of swimming at the 2019 ACC’s Men’s Swimming & Diving Championships gets underway this morning in Greensboro, NC. This morning will feature prelims of the 500 free, 200 IM, and 50 free.

Last year’s 500 free champion, NC State’s Anton Ipsen, was a senior last year, so he’s not back to defend his title, but last year’s 2nd and 3rd place finishers, Notre Dame’s Zach Yeadon and Louisville’s Marcelo Acosta, do return. While this hasn’t been a traditional strength for the Wolfpack, it’s a discipline in which they’ve steadily developing for a few years now, and the addition of former UVA head coach Mark Bernardino only seems to have helped: the NC State women swept the top four places in this event last week.

Like Ipsen, Ryan Held is out of eligibility, but two NC State swimmers still sit at the top of the 50 free seeds. Freshman Nyls Korstanje has gone a long way toward blunting the impact of losing Held, and has already been 19.29 this season. Justin Ress, last year’s runner-up, sits 2nd on the psych sheet with a 19.38 and sports a lifetime best of 18.96, from last year’s ACC prelims.

NC State’s Eric Knowles put up the fastest time this morning with a 4:13.79 in the penultimate heat. That’s almost a two-second personal best for the Wolfpack sophomore, whose previous best was a 4:15.46 from last year’s ACCs championships. NC State got a total of three men into the top eight, with Gil Kiesler (4:16.92) and John McIntyre (4:17.73) putting up the 6th and 7th-fastest times, respectively. It was nearly four up for the Wolfpack, as Daniel Erlenmeyer ended up 9th, missing out on the A-final by about a quarter a second, with a time of 4:18.06. Knowles, Erlenmeyer and Kiesler were all in the A-final last year.

Virginia got two up, with Brendan Casey leading the final heat from to start finish, touching with a 4:14.30, good for 2nd-fastest time of the morning. He’ll be joined by teammate Sam Magan, who was the last man in, with a time of 4:17.83.

The top two seeds heading into today, Notre Dame’s Zach Yeadon and Louisville’s Marcelo Acosta, will also be in tonight’s A-final. Acosta put up the 3rd-fastest time of the morning with a 4:14.96, while Yeadon was 4:16.75. Acosta’s teammate Zach Harting finished 10th in prelims for the 2nd year in a row; he went 4:18.22 this morning after going 4:18.52 last year. Virginia Tech’s Lane Stone, who last night had the fastest split in the 800 free relay, went 4:16.26 this morning, the 4th-fastest time.

After posting the fastest time this morning with a 1:42.49, NC State senior Andreas Vazaois will be in lane 4 tonight as he defends his title. He’ll be swimming right next to Georgia Tech’s Caio Pumputis, who was 1:43.34 this morning, but did put up a 1:42.42 earlier this year. Vazaois is one of a handful of men to ever break the 1:40 mark, but presumably is not fully tapered here, so it could be a good battle tonight between those two.

They were the only school to put more than one man into the A-final. Three of the four other who made the top eight this morning swam in last year’s A-final, including FSU’s Will Pisani (19.17), Louisville’s Andrej Barna (19.33), and Virginia Tech’s Ian Ho (19.50). Pitt’s Blaise Vera will be the final man in the top eight, after putting up a 19.34 this morning.

I feel like Yeadon’s got more in the tank. He’s going to throw down tonight

hahahaha, by “it” you mean the hopes and dreams of those on the team

16
0
Reply
The Wolf of Raleigh
Reply to  Koolaide

They have become so irrelevant it’s not worth my time looking at their results anymore.

They got a swimmer who will swim tonight! It’s on, don’t call it a come back

This is brutal to read, guys. Brutal. Seems surreal UNC had a day like this.

UNC is a well oiled machine. One of great class. Coach DeSelm is without doubt one of the finest coaches in America. It is just that he does not have any good swimmers. If NCState and UNC traded swimmers, Coach DeSelm would have the PACK finishing at least 9th in the ACC!

3
-3
Reply
The Wolf of Raleigh

Why are all the PITT swimmers writing “LAB” on their bodies?

Where your 23.2 Breaststroker can also go 19.5 freestyle

You’re getting Cobe Garcia and Daniel Graber mixed up

HOO do y’all have for second behind State?

That. Or swimming through the meet?

He didn’t swim too fast last year at acc’s either until the last day 100 free. I’m sure he’s swimming through the meet.

Flopped out of the pool after the 2IM. Definitely not feeling well.