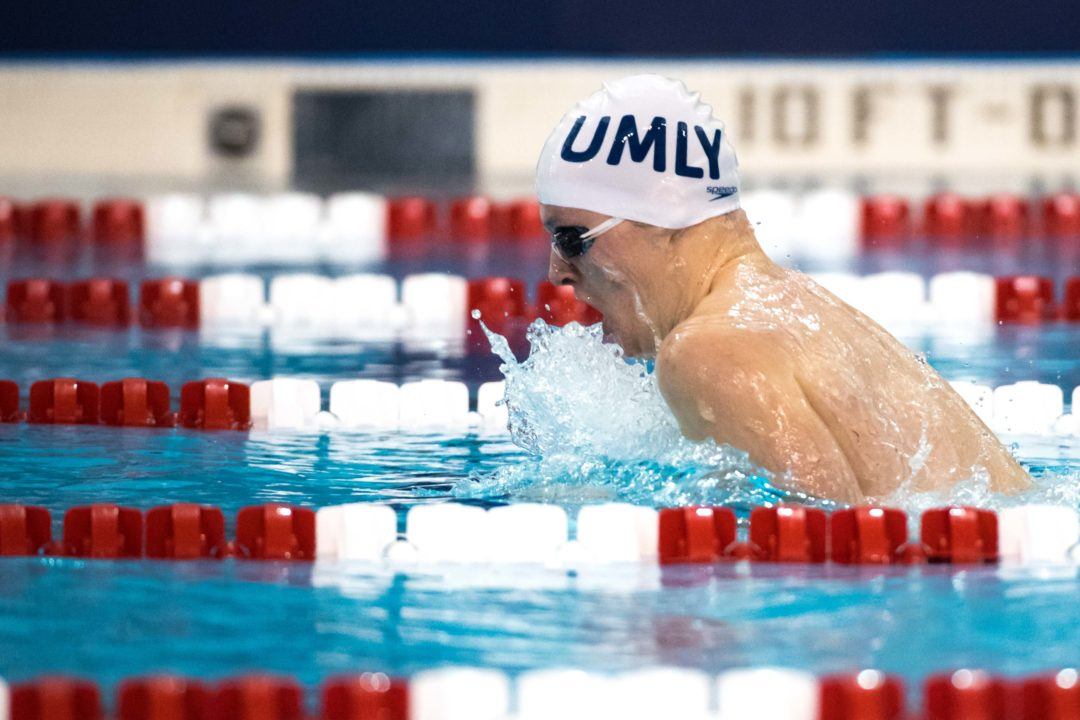 Brendan Burns, above, already ranks 4th in the all-time 15-16 rankings in the 100 yard fly, and won Pennsylvania state titles in both the 100 fly and 100 back earlier this year. Archive photo via Mike Lewis/Ola Vista Photography

The 2018 YMCA Short Course National Championship meet kicks off on Tuesday in Greensboro, North Carolina. This year’s meet will have the theme of State Pride, where athletes will dress up as something related to their state for the show-stopping Parade of Athletes.

The girls from the York YMCA are the defending meet champions, though after the graduation of a number of stars, including Georgia freshman Courtney Harnish, they’ll have to battle to repeat. The team will return another star, though, in 17-year old Florida commit Leah Braswell. She’s the top seed in the 500, 1000, and 1650 freestyles. Also representing York is 13-year old Meaghan Harnish, one of the youngest competitors at the meet for a team in York that is renowned for putting young swimmers into finals at this meet. She’s the younger sister of the aforementioned Courtney.

On the boys’ side, the Sarasota Family YMCA had a resurgence in 2018 to win the boys’ team title by 248 points. They too lost a budding collegiate star – Austin Katz, who won the NCAA title in the 200 back as a freshman 2 weeks ago while representing the University of Texas. Keanen Dols, who was 2nd behind Katz in the 200 back at this meet last year, has also moved on (to Penn), and so the boys’ scoring should tighten up considerably this year. They still have a strong distance crew, led by Arik Katz and Brendan Firlie, who are both seeded in the top 5 of the 500, 1000, and 1650 freestyles.

Among the other recognizable names at the meet:

Every Person ever was wrong when they said MICHAEL Phelps is the GOAT…….The real one is this kid from Ohio named Colton Phelps. He the GOAT

There will be a lot of records broken.

I love SwimSwam and all that they do, but I feel like ignoring Dant is a really big omission, especially given his recent commitment to NC State. Add in the fact that they included pieces on the distance crew for Sarasota, who, while strong swimmers, are not even in the same stratosphere as Dant, and it sort of feels like a big, big miscue.

But it is just an article. No worries.

Dant’s name is on the rotating scoreboard with the GAC pool record in the 1000.

Thanks Mom and Dad. Love-Ross