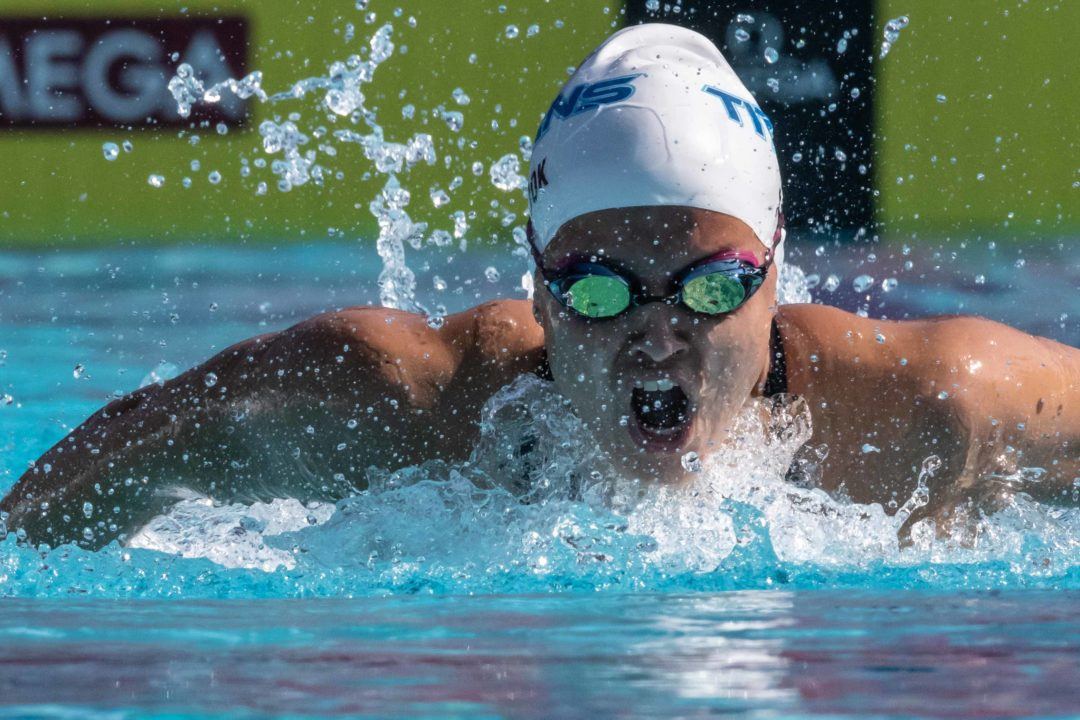 Charlotte Hook (pictured above) and Tona Zinn stood out among their peers in 2018. Archive photo via Mike Lewis/Ola Vista Photography

Hook left her mark on the 13-14 age group in indelible ink during 2018. Not only was she the sole individual National Age Group Record-breaker of the year (200-yard butterfly), but she also took down a relay NAG with TAC Titans teammates Brooke Zettel, Claire Curzan and Elena Dry. The quartet swam at the 2018 TYR ISCA Junior Championship Cup and broke the girls’ 13-14 200-yard medley relay National Age Group Record with a time of 1:42.25, erasing a previous record of 1:42.77 set by the Aquajets Swim Team in 2012. Hook won the 200 IM at that meet and was runner-up in the 200 fly. Showing off the breadth of her talent, she also made A finals in the 100 back and 200 breast and B finals in the 200 back, 100 breast, and 100 fly.

Zinn followed up with a very solid summer. He won the 200 IM and was runner-up in the 200 fly at Santa Clara Futures, and closed out the summer ranked #1 for the year in the 200 fly and 200 IM. He also demonstrated versatility by finishing 3rd among 14-year-olds in IMX scores for the 2018 LCM season. Over the course of the summer he improved in leaps and bounds and climbed the all-time ranking lists, as evidenced below:

Tona trained with our club while on vacation in NYC. He and his father are humble, kind and a joy to have. Never were Tona’s accomplishments mentioned in our discussions of dropping in over New Years week. When I looked him up in SWIMS I knew that we could probably squeeze him in. LOL. The one thing that stands out are his turns. The saying perfect practice makes perfect applies to his turns 100%. Not one from warm-up to warm-down was taken off. All crisp, fast and beautiful to watch. BEST OF LUCK TONA!! The added toughness you found while in Queens, NY will make all the difference!! 😀

And talking about Claire Tuggle, I see no trace of her name in the USA swimming database since the last junior pan pacs. She hasn’t raced since last summer.

Love to see some many great age groupers coming out of NC.

Especially if it means the comment section isn’t full of NC swimming parents and coaches arguing about nonsense and just appreciating the great swimming in the state!