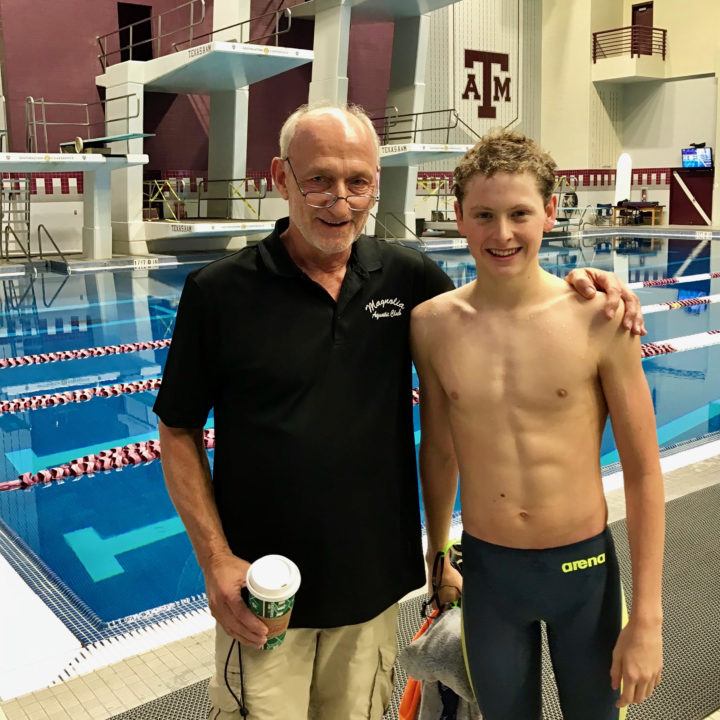 To see all of our 2018 Swammy Awards presented by TYR, click here. 2018 Honorees: Leah Hayes and Dean Jones... Archive photo via Jeff Gonder

2018 was a big year for Hayes, who swims under coach Nancy Hooper with the Fox Valley Park District Riptides in suburban Chicago. No stranger to breaking National Age Group Records (she went on an 8-day record-breaking streak in 2016, taking down 5 long course records in the 10-and-under age category), Hayes added two more to her resume this year: the 100-yard breast and the 400-yard IM. She then proceeded to collect an impressive number of qualifying times for national-level meets and ended the year on the cover of Sports Illustrated Kids, having been named the 2018 Sports Illustrated SportsKid of the Year.

Maggie Wanezek – Elmbrook Swim Club (Brookfield, WI): Wanezek, who swims for coach Mike Rose at Elmbrook Swim Club, was a dominant force in backstroke for the 11/12 age group in 2018. She broke the National Age Group Record in the 50m back in July at the Wisconsin 12 & Under Long Course State Championships. Wanezek became the youngest girl ever to break the 30-second barrier in the event, and she did it twice in one day. She led off the 200 medley relay with 29.97 and she won the individual event in 29.36. That time was nearly a second faster (.80 to be exact) than the previous mark, set by Keaton Blovad in 2011.

Magnolia Aquatic Club’s Jones (who is also listed as Gary Jones in meet results) etched his name in the national record books not once, but twice, in 2018. Swimming at the Texas Age Group Championships in Austin this summer, he shaved 2.8 seconds off his seed time to win the 200-meter butterfly with 2:11.07, taking a nearly-8/10 bite out of Dare Rose’s 2015 mark in the event. Jones went on to win the High Point Award at TAGS.

I watched Jeremy Kelly tonight in practice, with our daughter attending. His backstroke is unbelievable for a 12 year old. The start is perfect and then high tempo and strong entry. He also just swam, kids told me, 2:14 in 200 breast. A great talent and a great kid.

Resembles Dean from Harvard a bit, no? Best wishes to all the award winners and shout out to the unsung heroes – all their training partners.

Way to go Dean, and all the other award recipients!!!