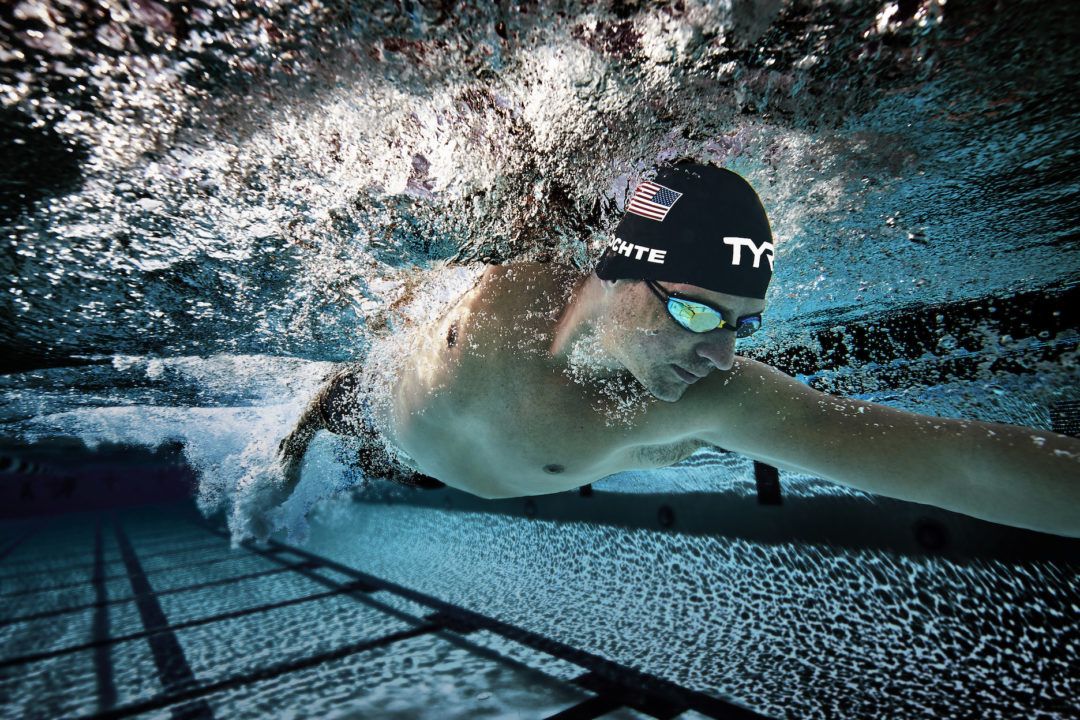 USA Swimming announced sweeping changes to its Pro Swim Series today, including 50-meter sprint shootout events at half the series meets and a “mystery” 200 IM event with random stroke order.

The changes start with the series name, which switched its title sponsor from Arena to TYR this year. The 2018 TYR Pro Swim Series will have 6 stops, including one new stop in Columbus, Ohio. We reported on that addition when the meet appeared on the USA Swimming Quad Plan in August, though USA Swimming couldn’t officially confirm the addition at that point.

Other new additions to the tour:

At the even stops (Atlanta, Indianapolis, Columbus), there will be A, B, C and D finals, with the A and B finals running first, then all C and D finals. These stops appear to be the more “traditional” Pro Swim Series format, though they will include the new additional Olympic events (men’s 800 free, women’s 1500 free) not previously included, and those races will yield points and prize money as Olympic events.

The series will also include team points, with teams drafted at the Golden Goggle Awards this fall. That competition is being dubbed the “SwimSquad Battle” and will keep a tally of team points throughout the season.

The full USA Swimming release is below:

COLORADO SPRINGS, Colo. – USA Swimming today announced a six-meet schedule, exciting format changes and a new title sponsor for the 2018 TYR Pro Swim Series, which will allow fans the chance to see some of the world’s most decorated athletes compete in the fastest race series in the world.

The meet dates and host sites for the six stops of the 2018 TYR Pro Swim Series – all long-course meters competitions – include:

Within the 2018 series, the six meets will feature two different competitive formats. Exciting adjustments to the Austin, Mesa and Santa Clara stops include:

The Atlanta, Indianapolis and Columbus meets will feature C and D heats following the A and B finals.

Adding to the TYR Pro Swim Series excitement will be team scoring throughout the series, called SwimSquad Battles. At the 2017 Golden Goggle Awards, a draft will be held among National Team athletes to build teams for the 2018 series. A team winner be determined at each meet and for the entire series.

USA Swimming and TYR also will create a recognition program for 18-and-under swimmers as part of the TYR Pro Swim Series.

“We could not be more excited for the upcoming changes for next year’s TYR Pro Swim Series,” said Tim Hinchey, USA Swimming President and CEO. “The format adjustments will create thrilling competitions for fans and athletes alike, and the camaraderie within swimming will certainly be on display with the new team scoring. USA Swimming is looking forward to partnering with TYR on what is sure to be a world-class series of events.”

“At TYR Sport we pride ourselves on providing athletes with products that push the limits of performance,” began Chief Executive Officer Matt DiLorenzo. “In becoming the new title sponsor of the 2018 TYR Pro Swim Series, we’re looking forward to not only energizing the swim community with gear they can believe in, but also having the opportunity to support athletes, coaches and fans in a new and exciting way.”

Domestic television coverage for all six stops will air exclusively on the NBC Sports Network and the Olympic Channel in the United States.

Swimmers may earn awards for top-three finishes in all individual Olympic events across the series. At each meet, $1,000 will be provided for a first-place finish, $600 for second and $200 for third. In addition to the single-event prize money, the overall male and female winners of the season-long series will earn a $10,000 bonus.

Male and female overall TYR Pro Swim Series champions will be honored at the conclusion of the 2018 series based on the number of points accumulated throughout the six series meets. Participants will be awarded points in each individual Olympic event throughout the duration of the series (Five points for first, three for second, one point for third place).

This is gonna be a lot of fun to watch. All the additions look good to me. Maybe would also like to see traditional relays with National Team members but that gets taxing real quick. Also not sure the shootout style for 50s will be conducive to producing world class competitive times but it is great practice and fun to watch, and better than historically pretending the 50s aren’t real events.

It seems like these events could make the meet more exciting for fans/ spectators but I’m curious to how the athletes feel about these changes. Pro swim series meets are for training purposes- and adding these events will make the meets longer and I wonder if athletes feel it’s beneficial to practice racing events (mystery IMs) that are never swum at championship meets. Something tells me micheal Andrew will like these changes… but I wonder how well he will be able to compete throughout three rounds of a 50- we know from his double to jr worlds he has trouble with endurance.

I think they’re trying to transition this from a training event to a more professional event. Swimming is evolving!!

Dude about to be a 400 IMer again calm down. Yall peep his goal sheet. Don’t doubt the kid he’s shown up before

Do you have a picture of this goal sheet?

The mystery 200 IM thing seems a bit gimmicky to me and then it makes all the results for that heat unofficial.

I had a fairly strong negative reaction to them initially, if only because I assume little benefit for the athletes.

But I dunno, guess it could be cool? Feel like people are gonna mess them up, which actually would be hilarious…ok, I’m on board.

I agree that mixed relays and shootout 50s are fun, I just don’t see what’s especially fun about changing the stroke order in an IM. OK, having fly last would be fun…to watch.

I’m just imagining them only knowing what stroke they’re gonna do as they come into the wall, those li’l automatic lap counters flashing FREE!! or something when they’re 5 meters out.

I’d also be on board with the orders being different for different lanes. I’m really leaning into the ridiculousness.

I like the changes, it adds a “fun” factor to these big meets which is something I think we need to make more widespread to actually grow the sport

I like the television coverage (vs streaming) so I can record and then watch when the events conflict with my job. I hope they gear the coverage to a TV audience and are consistent with post race interviews. Oh yeah, and show the whole distance races.

If they’re gonna try something new they should have the 50m free/back with no 15 meter rule. I’d love to see what Shields could go with an under water swim.