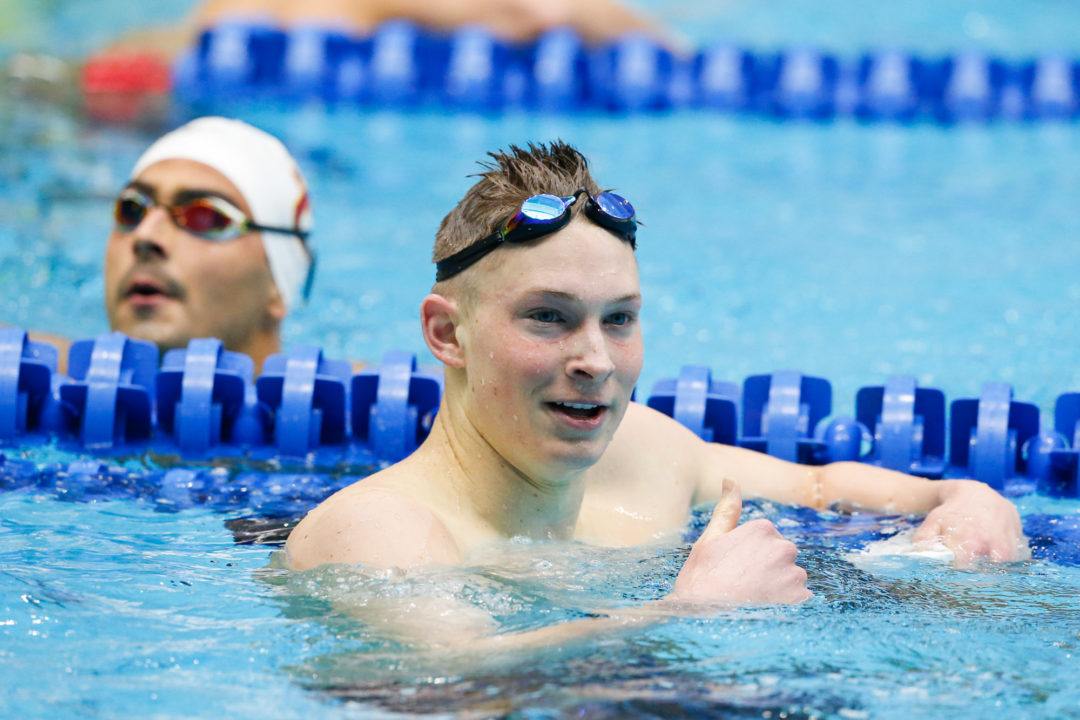 There are several men in contention for the title. Four of them are Longhorns. Austin Katz is the top seed, but Harvard's Dean Farris has also been sub-1:39 this season. Archive photo via Tim Binning/TheSwimPictures.com

There are several men in contention for the 200 back title this year. Four of them are Longhorns, with the Texas men heading into the meet with the potential to make up half of the championship final. Texas will field Austin Katz, Ryan Harty, Jonathan Roberts, and John Shebat. Both Shebat and Roberts are returning finalists. Harty is back after a redshirt season, while Katz will be competing in his first NCAAs as a freshman. Katz is the fastest man in the country this season. He, Harty, and Roberts have all been sub-1:40 already. The only question here is Shebat. At 100%, Shebat would be the favorite, but his fastest this season is a 1:41.52. Since he was out with an injury, we can’t be totally sure if he’s fully recovered until we see what he can do at the meet.

Though the Texas men have a great shot at landing someone on top of the podium, Harvard’s Dean Farris could be an obstacle to that. Farris, the Ivy League Champion, broke 1:39 for the first time this season. He’s the only man aside from Katz to do so this year. Another major challenge for the Horns is USC’s Patrick Mulcare, who has a best time in the 1:37-range. Mulcare was absent from Pac-12s, but was fast enough prior to that to earn 4th seed for the meet, just behind Auburn’s Hugo Gonzalez. Like Katz, Gonzalez will be competing in his first NCAAs as a freshman. He was a 1:39.05 at midseason. At SECs, he dropped significant time in his events except for in the 200 back, so his best swim may be yet to come in this event.

We already have 10 men who have been below 1:40 this season, and a few more have lifetime bests faster than that. It could be a tough battle for the last few spots in the final. Alabama’s Christopher Reid, Indiana’s Mohamed Samy, Denver’s Anton Loncar, and NC State’s Coleman Stewart should all be in the mix. Of those men, Loncar is the only returning finalist. Georgia’s Javier Acevedo and Stanford’s Abrahm DeVine have been just a tenth shy of breaking 1:40 this year.

We have quite a few talented freshmen who could step up and grab a top 8 spot. Florida’s Michael Taylor put up a lifetime best 1:40.28 at his last chance meet. Cal’s Daniel Carr and Bryce Mefford have made big drops this season and both enter with times in the 1:40-range. USC’s Robert Glinta, an Olympic backstroke finalist, enters with a 1:40.50. This is his first season of yards swimming, so it’s hard to know what to expect, but it’s safe to say he’s a contender. Indiana’s Gabriel Fantoni is also in his first season of yards and enters in the 1:40-range.

is it bad that i have shebat winning this lol

nope, nothing wrong with backing the runner-up from last year

I really don’t know what’s going to happen in the majority of these events. I’m really exited! Some mystery makes things much more exiting!

We need a article on the Dean Farris meme

We all know Dean Farris can break 1:30, but you forgot to mention he would be swimming backstroke.

He is a one year wonder and will be known as a has been after this NCAA meet.

I’m not sure how he can be a one hit when Nader given the times he’s posted this season and last?? That’s definitely at least two hits

StankGal is trying to break Bobo’s record for most downvotes

Fulton, Bell, Einstein and Doschevsky were all laughed at by their contemporaries as well. It takes courage to ward off the many slings and arrows (down votes) of the little people. To have such intellect is a loadstone at times.

Oh no I was not referring to Dean Farris of Harvard! I mean Dean Ferris of Olaabatchie College! EVERYONE KNOWS Dean Farris will win the 2 Back and 2 Free!!!

I came because i saw dean

Gonna need a clean up on aisle Bon Jovi.

How is Dean not the top pick? Is he swimming Breastroke the last 100 or something?

I was under the impression he would, yes. Just to make it a level playing field.

1:33.62 for Almighty Meme Lord Deanium Farrisinius, only that slow because the officials make him swim another fifty as a cooldown since he was so far ahead by the finish.

I have Hugo beating out Roberts in my pickem….but wouldn’t be upset to see Coleman or Hennesey sneak up into 4th 😉

I won’t eat my shorts though!