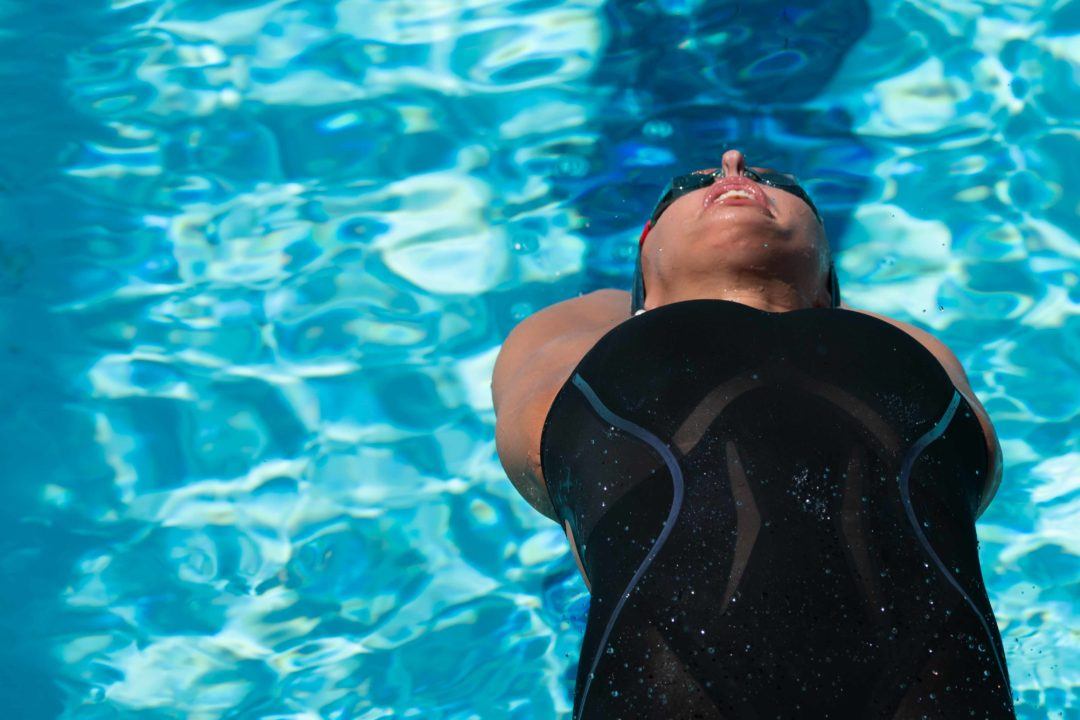 The Golden Goggle Awards are USA Swimming’s yearly awards gala, and they’re happening tonight in New York City. You can follow along on the USA Swimming website, which will livestream the event. Follow the link below:

Fans have been voting for the past two months on awards, with the fan vote counting for a portion of the final award decision. You can check out our full ballot here.

8:40pm – remainder of the program, including the rest of the award presentations

After an introduction by host John O’Hurley, the evening got underway with the presentation of the 2018 Pan Pacs team.  The staff and athletes walked in a number of unique ways, ranging from the men’s coaching staff dabbing to a few semi-nervous waves to bows…and some flossing.

The voters had two world records from which to choose, as both Baker and Katie Ledecky set new marks in the spring.  Ledecky may have been a big of a victim of her own success, as she’s broken world records seemingly at-will over the past few years, although she did get this one style, as it came in her professional swim. Baker’s 58.00 at this summer’s USA Nationals was a bit more surprising, and ended up launching her own pro career. It’d be hard to argue with either choice, and Baker’s swim got our vote.

It felt like something of a comeback for Murphy, who had the kind of disappointing 2017 season that most swimmers would die for.  After sweeping the backstroke golds in Rio, Murphy had to “settle” for a bronze in the 100 and a silver in the 200 in Budapest at the 2017 World Championships.  He roared back in a big way in 2018, sweeping golds at Pan Pacs and coming within a tenth of a second of his world record.

Now, we take a break from the awards for a new game show called “Swimmers Got Talent.” Acts include…

I was probably a little pitchy.  I’m sorry about that. – Katie Ledecky

And the winner is…Beisel and Ledecky.

We said in our ballot article that this award really depends on how you define “breakout.” While obviously all four nominees had great arguments in their favor, the voters opted to go with Andrew, who won his first national titles and a gold medal in the 50m free at the 2018 Pan Pacs. Andrew had lots of age group success, but his training style and a decision to go pro while still in high school, forgoing NCAA competition, raised the stakes in the minds of many fans of what it would take for him to be considered a success. While there still may be a few doubters out there, it’s hard to argue with an individual gold at a major international meet like Pan Pacs.

Micah Sumrall, formerly Micah Lawrence, was a member of the 2012 US Olympic Team, swam only a couple of races (and no breaststroke) in the 2016-2017 season after missing the Olympic Team. She returned full-steam in 2017-2018, though, training out of a club team Chattahoochee Gold in Georgia that mostly caters to high school-and-younger swimmers. It was as if she hadn’t missed a beat, and she wound up winning gold at the Pan Pac Championships in the 200 breaststroke – her first international gold medal.

All 5 nominees had swimmers with great years, but this race really came down to 2: Cal men’s head coach Dave Durden, who put 6 swimmers on the men’s Pan Pacs team; and his former assistant Greg Meehan, the Stanford women’s head coach, who put 5 on the women’s team. Meehan’s list included Brooke Forde, Katie Ledecky, Ella Eastin, Katie Drabot, and Simone Manuel. That included the miraculous qualification of Eastin after missing most of the training leading up to Nationals while battling mono. Add to that a 2nd-straight NCAA team title for Stanford, and Meehan was the voters’ choice.

One of two relay titles for the US, in 7 tries, at the Pan Pac Championships, this was certainly the most exciting relay of the year. Murphy, in spite of being the World Record holder, trailed Ryosuke Irie to the wall on the backstroke. Japan’s Yasuhiro Koseki built that lead to half-a-second.

Caeleb Dressel clawed the Americans back into the race with a 50.6 split, and the veteran and indomitable anchor Nathan Adrian won what was basically a dead-heat with Japan when he left (and held off the Olympic champion Kyle Chalmers of Australia, who almost ran them down) for the win.

But, looked at through anybody else’s lens, she had another historic year. She broke the 1500 free World Record in her first swim as a professional. At a Pan Pac meet that was a little dicey, she won more medals and more individual medals than any other swimmer. She was one of two Americans to break a World Record this year, and the only one who both broke a World Record and won Pan Pacs gold in the same event (Baker broke the 100 back World Record at Nationals, but took bronze at Pan Pacs).

This marks Ledecky’s 6th-straight Female Athlete of the Year honor. Only Michael Phelps (7, not consecutively) has more.

His 3rd win of the night in 3 nominations, Ryan Murphy was named the Male Athlete of the Year. All three were viable and defensible choices, but as it usually does in these awards: the swimmer with the most medals won the day. Murphy won the 100 and 200 back and also took a 3rd gold in the 400 medley relay. Neither Kalisz nor Wilimovsky had a relay swim, and so each only won 2 golds (Kalisz – 200/400 IM; Wilimovsky – 1500/10k).

This is Murphy’s first Male Athlete of the Year Award and the first for any Cal men’s swimmer.

USA Swimming is just awful with streaming and the marketing around it. There is (and has not been) any info on their site about streaming the event (other than the red carpet stream posted a day or two ago). You would think they might have something saying they were going to stream it live and then when the stream will actually be and a time line of what’s going on. Even now there is no indication of when the stream will start and just music playing. Their handling of Summer National’s streaming/TV coverage had similar lack of any indication of when and where to watch. And coverage of Pan Pacs….

Great reminder – Its time they step up and bring us quality

Kathleen Baker swam the 100 Backstroke, not the 100 Freestyle for Race of the Year I believe. 🙂

Is there a video of Beisel/Ledecky show?

1. Who stands behind “swimswam’s choice”? How can you have the same opinion on everything? 😀
2. If no quantitative way is used in decision making process and and the only emotional impression is the decisive factor and if we want all our outstanding swimmers to be awarded with something then I would give the race of the year award to Ledecky and the best swimmer – to Baker.
Why? Because Katie Ledecky will be the best athlete for many more years in the future. But this world record can happen to be the last one in her career. Of all her records nobody (even Titmus 😀 ) is not even bragging to beat it. It will stay… Read more »

Who says we want all our outstanding swimmers to be awarded something? And, a best athlete of the year is exactly that. The best athlete for that year, not a year in the past, not the future year. For that year, who was the best. Troll on YOZHIK.

Ok, you don’t want to award Baker – that’s fine with me. But in any case The best achievement on the women’s side was 15:20 by Katie Ledecky. Baker’s record can be considered the most unexpected. Who would thought that she improves by 0.54 sec since last year and breaks word record by 0.1sec at trials meet.

If we compare these WRs with those set in 2007, the last year before the super suits, we see a 2.34% improvement for Ledecky over Kate Ziegler, and a 2.42% improvement for Baker over Natalie Coughlin. This suggests that it is not at all obvious whose WR is better.

How is Michael Andrews Dad not up for coach of the year?

I suppose the fact that he’s only got one world class swimmer whereas the other 5 have multiple?
I do agree with you though, he should at least be recognised for what he’s done with MA

MA had the year of his life so far ……..would totally deserve something

but what? his athlete got breakout performer of the year

The Bruce Gemmell/Katie Ledecky analogy is the best one I’ve heard. I don’t think he had a better claim than either Durden or Meehan, but I personally think he should’ve been nominated.

I’d be curious to see how many coaches of athletes who won gold medals at Operation Gold meets haven’t been nominated before. If I get bored over the holiday weekend maybe I’ll look into it.

USA Swimming seems to be warming up to the MA story, skipping HS and college swimming, USRPT. The ‘machine’ isn’t fully there yet, but in some regards ‘the machine’ of swimming seems to be more willing lately to overlook all of that and promote his success rather than focus on the decisions that… Read more »

Bruce Gemmell got coach of the year a few times when his only athlete was Katie Ledecky. She had success across multiple events and set numerous WRs, so perhaps MA’s dad could get it when MA has even more success in the other 50’s.

I am sure Michael Andrew’s Dad will be put up for coach of the year when hell freezes over.

Female race of the year: Katie Ledecky 15:20.48. Don’t get complacent, that is utterly insane.