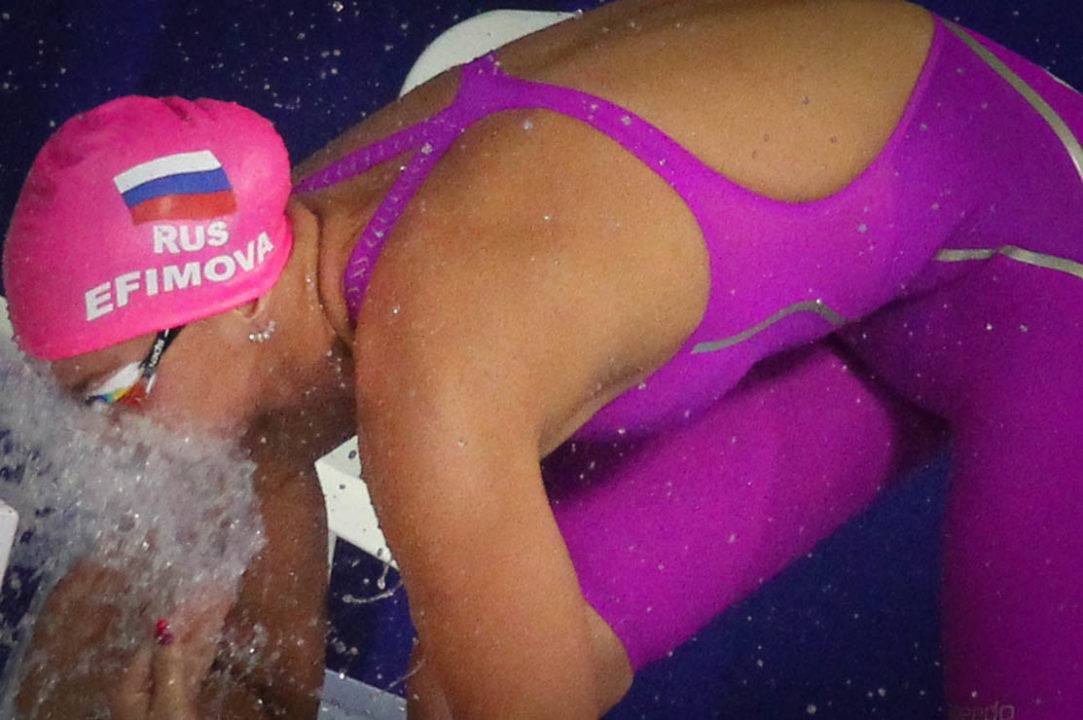 Russia's Yuliya Efimova looked at ease in tonight's 100m breast, clocking a time that was within striking distance of what she produced at this year's European Championships. Archive photo via Giusy Cisale

Check out Kyle Chalmers rip a 45.03 short course 100 freestyle at the Doha stop of the 2021 FINA World Series to become the 3rd fastest man in history.

Seto And Toussaint Collect $12k In Doha As McKeon, Sates Hold On To Series Lead

At his first World Cup meet this year, Daiya Seto powered his way to the top of the rankings following 4-for-4 event wins in Doha.

Kyle Chalmers broke the Australian SCM 50 butterfly record over the weekend in Doha. He swam the event in 22.24, coming in second after Tom Shields.

Both women were 11-plus seconds under the previous national record, set by Jo Hyun-Ju in 2015. Han ultimately came out on top in 8:24.06.

You can read more about Sjostrom’s impressive effort here and Morozov’s thriller here.

Hosszu battled Netherlands’ Kira Toussaint in the 100m backstroke, with the Dutch national record holder coming out on top with the only sub-minute time of the pack. Clocking 59.80, Toussaint was able to deny Hosszu the gold and instead add another medal to her own tally, which includes 50m back gold from yesterday. Hosszu settled for 100m back silver this evening in 1:00.77.

America’s Michael Andrew collected 2 medals on the night, finishing just .06 behind Morozov in the 50m back with a silver medal-garnering mark of 24.49, while also taking bronze in the 50m breast with a mark of 27.30. Taking that breast win was Brazil’s sole swimmer, Felipe Lima, who took the race in 26.90.

Another American made it onto the podium in the form of Blake Pieroni in the men’s 100m freestyle. Although Morozov took the gold in a time of 48.26, Pieroni nailed the 4th fastest time of his career – 48.30 – for silver. Pieroni’s fastest 100m free ever was the 48.08 he threw down at U.S. Nationals this past summer, followed the 48.21 and 48.23 he notched at this year’s Pan Pacs and last year’s World Championships, respectively.

100m free bronze tonight went to Belgium’s Pieter Timmers, who stopped the clock in 49.22. Just last month Timmers was in the hospital with meningitis, a situation which forced the Olympic silver medalist to withdraw from the European Championships.

Olympians Chad Le Clos of South Africa and Yuliya Efimova of Russia raced their way to gold medals this evening in their respective 200m fly and 100m breast events. For Le Clos, he was able to beat out Russian Daniil Pakomov, taking the top prize in 1:56.68 to the Russian’s 1:56.90.

1:05.53 is what Efimova produced in Glasgow to take the 2018 European Championships crown in a new meet record, so the 26-year-old was in good form stopping the clock less than half a second behind that result.

Would anyone like to comment/answer why there are so few pro USA swimmers at these events? It seems like a great opportunity to race the top international swimmers from other countries, win prize money, and build brand awareness for swimmers and their sponsors. I get it that college swimmers can’t win prize money and are in school, however, there are plenty of top USA pros on both women’s and men’s side.

Geography. Flights across the oceans are tough on the body. If the World Cup stops we’re in North America, you would see the attendance with Europe flip flop.

Maybe the case, but don’t come dragging there’s no money to make in swimming if you aren’t competing in the World Cup.

I’m not a huge fan of it either, FINA is out of touch for the most part regarding the rules but it’s a good opportunity to make a buck. Way more than the american series and the average GP meets. Especially for the overall race. Not to mention it’s basically the only big international meets in the autumn.

Swimming is only alive every two years/fours years because good swimmers choose not to compete. Imagine if you could see all the big names in a GP series like in T&F. Thus money stays low forever.

There is some prize money, but not that much if you aren’t Katinka Hosszu. It takes a couple podiums just to cover travel expenses.

Also, even most pro Americans train with college teams, which spend the fall cranking out heavy yardage.

Worth pointing out that many elite athletes get their travel expenses covered, such as was the case with Blake Pieroni.

has there ever been a world cup event in the US?

Yep! Indianapolis, Orlando, DC (twice), and New York (x5) have each hosted World Cup meets. East Meadow in 2005-2006 was the last time there was an American stop.