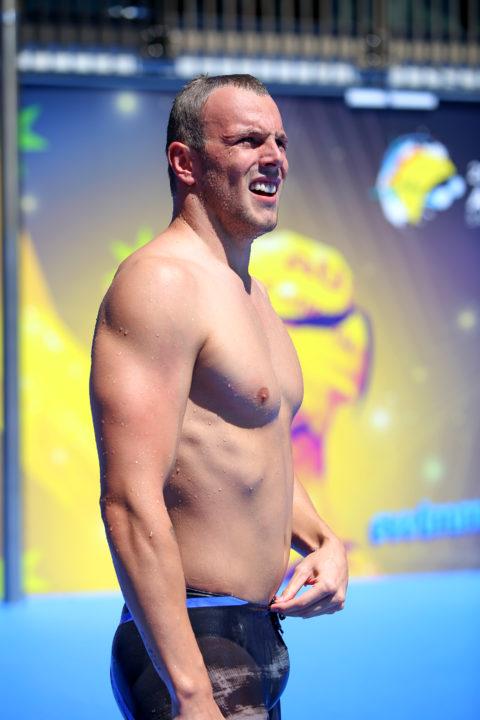 Kyle Chalmers was king was again, this time taking the 200m free title to give host nation Australia another gold. Archive photo via Swimming Australia, Ltd.

The host nation of Australia proved to be almost unstoppable in the Optus Aquatic Centre pool tonight. Day 2 of the Commonwealth Games brought the Aussies a massive 6 gold medals on the session, led by a 1-2 punch in both the men’s 100m backstroke and men’s 200m freestyle.

2015 double world champion Mitch Larkin kicked off the charge with a win in the 100m backstroke, while Bradley Woodward finished right behind in silver. A similar result took place in the 200m free, with 2016 Olympic champion in the 100m freestyle, Kyle Chalmers, taking the Commonwealth title ahead of 400m free Olympic gold medalist Mack Horton.

The women took the streak one step further by capturing a 1-2-3 sweep in the 100m butterfly sprint. Last night’s 200m freestyle bronze medalist, Emma McKeon cruised to the top of the podium, followed by comeback kid Maddie Groves and West Australia’s Brianna Throssell.

Then, the foursome of Cameron McEvoy, James Magnussen, Jack Cartwright and Kyle Chalmers topped off the night with a big win in the competitive 4x100m men’s free relay.

A few nations got on the swimming board for the first time these Games with Alia Atkinson‘s silver in the 50m breaststroke, Dylan Carter‘s silver in the 50m butterfly and Chad Le Clos‘ winning 50m butterfly effort. New Zealand also reaped a surprise medal in the form of young Lewis Clareburt‘s bronze in the 400m IM after having just been added to the Kiwi roster in February.

Yep, the Aussies didn’t leave much on the table tonight. On a lighter note re that photo of Kyle Chalmers…. Jeez! Is that old, grizzled guy only 19 years old!

Swimming is a tough sport!!