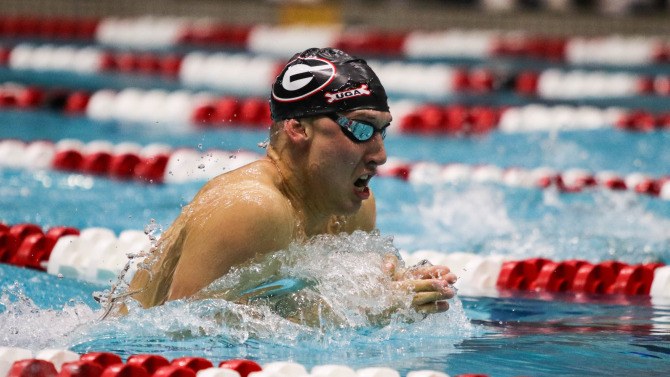 Chase Kalisz stormed to a new NCAA, American, and U.S. Open record at the 2014 NCAA Championships in a dominant performance, earning himself a NCAA title in his sophomore season. His junior year, though, he was off of his best by a considerable margin, and conceded the victory to Texas’s Will Licon.

Licon has opted for the 100 breast, however, this year, which should make it a bit easier for Kalisz to return to the top. It won’t be easy, though, with Florida junior Mark Szaranek and fellow U.S. Olympian and Georgia teammate, Jay Litherland, breathing down his neck. Kalisz is the top seed with a 3:36.21– the fastest he’s been since his 3:34.50, and faster than his 2014 SEC performance by over half a second. Szaranek is right behind him with a 3:36.54, and Litherland is a bit further back at 3:38.19.

Texas’s Jonathan Roberts will try to make the A final here with his teammate Licon out of the event– Roberts comes in with a 3:40.26, just ahead of UNC junior Henry Campbell (3:40.88). Both men went best times at their respective conference meets, while Campbell had never broken 3:46 until ACCs. Michigan freshman Charlie Swanson leads the Big Ten with a 3:41.13 for the 8th seed, just over Aidan Burns of Georgia (3:41.56).

The Stanford contingent of #10 Abrahm Devine, #11 Curtis Ogren, and #13 Max Williamson is back after Devine scored in the A final and Ogren in the B final last year. Williamson was 21st, but not far out of scoring range in 2016. Meanwhile, #14 Sam McHugh of Tennessee (3:42.54) and #17 Gunnar Bentz of Georgia (3:42.89) return after scoring in this event last year in the A final.

Dark Horse: #11 Joseph Patching (Auburn). Patching finished 11th in this race last year. The 11-seed is a senior, with loads of experience, but will need to go a lifetime best in all likelihood to be safe into the A final.

an olympian getting fourth, you say! What a time to be alive. Amazingly, I actually agree with that prediction. This event just has some crazy power in it.

I have a feeling Seliskar is going to pull of something special this year, even if it’s not in this event.

Yes Seliskar will get second

Georgia men too deep in this event ! So impressive