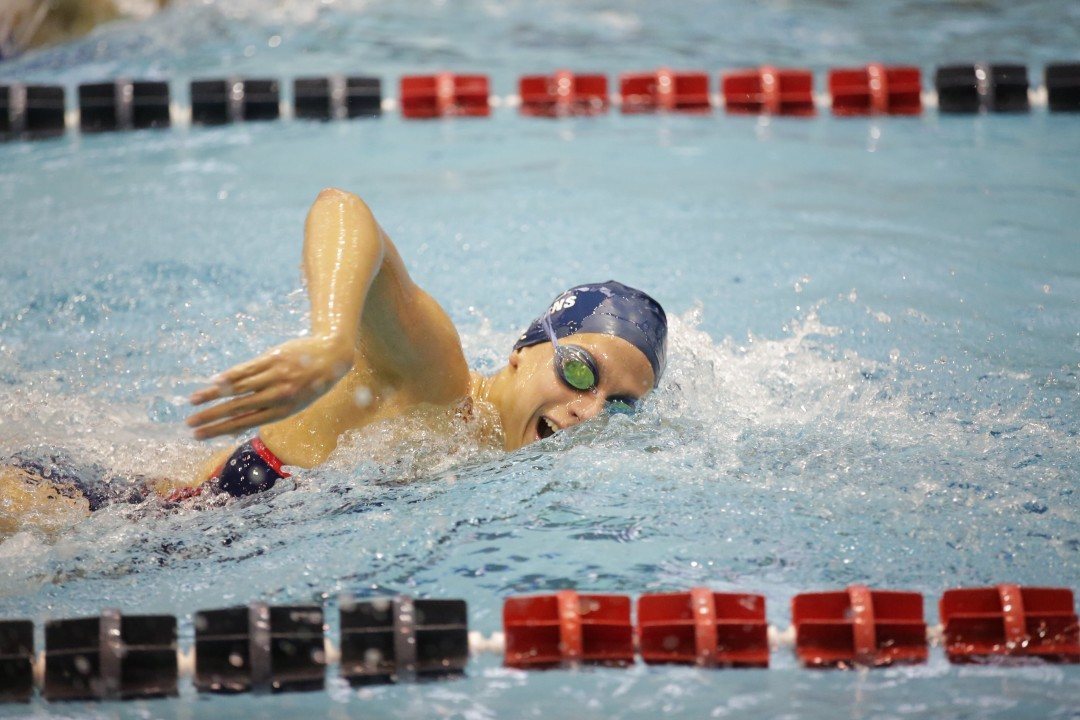 Virginia Burns will be in lane 4 for the 500 free tonight, but Harvard and Yale dominated Day Two prelims at the 2017 Ivy League Women’s Championships, earning a total of 18 and 16 final swims/dives, respectively. Archive photo via Hunter Martin

It continues to be a two-team race on the final day of competition at the 2017 Ivy League Women’s Swimming and Diving Championships, with both teams placing nearly double the number of swimmers and divers in A finals vis-à-vis the rest of the field.

The Yale women’s swimming and diving team is poised to win its first Ivy title since 1997.

Harvard and Yale dominated Day Two prelims at the 2017 Ivy League Women’s Championships. After breaking two Championships records on Wednesday night, Yale came in Thursday morning with an 18-point lead over second-place Harvard. The Bulldogs landed 6 swimmers and 4 divers in A finals, while the Crimson loaded up with 8 swimmers and 4 divers in A finals. Leading the charge for Yale were Destiny Nelson, who posted the top time in the 200 IM with 1:59.05, and sprinters Bella Hindley (22.40) and Kina Zhou (22.71), who led the qualifiers in the 50 free. Harvard placed four swimmers in the A final of the 200 IM (Meagan Popp, Sonia Wang, Geordie Enoch, and Daniela Johnson) and three in the 50 free (Mike Dahlke, Gabby Sims, and Mei Lynn Colby). Additionally, both Harvard and Yale shut the door on the competition in 1 meter diving, earning all eight slots in the championship final.

Penn took three of the top 8 spots in the A final of the 500 free, typically the Quakers’ most successful event. Double-defending champion Virginia Burns led the way with a morning swim of 4:43.52. She was followed by teammate Madison Visco, then by Cailley Silbert of Yale.

Based on point projections for the four-day meet, Princeton should overtake Brown and finish in third by the end of Day Two. Cornell outscored its psych sheet seeding by 35 points on Day Two and is challenging in a tight battle for sixth place. No divers and a costly relay DQ may have cost Penn its perennial spot at number 4 this year.