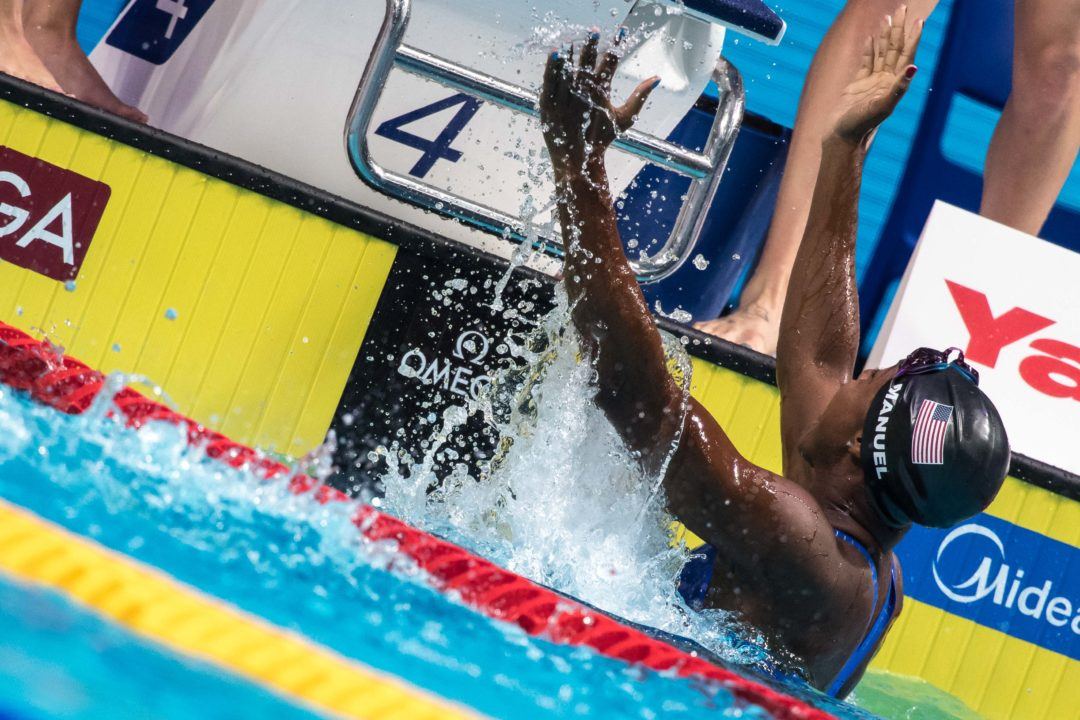 Simone Manuel is back in action for Stanford. But can they keep their hold on the #1 rank? Yes. The answer is obviously yes. Were you seriously wondering? Archive photo via Mike Lewis/Ola Vista Photography

As we head into conference championship season, it’s time for our penultimate NCAA Power Rankings on the women’s side. There aren’t too many meaningful changes this time around, which makes sense given most teams tend to hit their training hard and don’t flash much game-changing speed between winter invites and the post-season.

Alabama and Notre Dame were bad matchups for the ‘Noles, who are built to be a better NCAA scoring team than a dual meet program. Natalie Pierce is swimming faster than she ever has in dual meets and both medley relays are NCAA championship final contenders. -JA

Wisconsin showed up to swim on the road against a highly-ranked USC program, pushing the medley relay down to the wire and winning the 400 free relay. Beata Nelson is far outpacing her 2017 production, and she’s one to watch for a major breakout at the Big Ten Championships. -JA

A road win at Florida was the team’s first time topping the Gators in Gainesville since 2006. Aly Tetzloff, in particular, is swimming great, putting up a lifetime-best 53.14 in the 100 back vs Texas and hitting that same exact time two weeks later against Florida. -JA

Caroline Baldwin has been consistently ripping off 22-lows and 49-lows in the sprints this January, as fast as anyone in the nation (outside of Simone Manuel) has been this month. -JA

As promised, Liz Li returned to competition this month and is swimming just as fast as she did in-season a year ago. Her presences bumps up the relays significantly and Ohio State takes the biggest leap of any team in our rankings. -JA

The divers looked great at the Tennessee diving invite. Transfer Kristen Hayden was a big pickup and Sarah Bacon looks outstanding. Meanwhile in the pool, flyer Danielle Nack is a consistent powerhouse and breaststroker Lindsey Kozelsky is finding her next gear, ranking #2 nationwide this month in the 100 breast. -JA

I have a gut feeling that we’re all underestimating Mizzou. -KO

Mizzou looked beyond tired for most of their January slate, but then roared back at the last minute with some huge showings at their home invite last weekend. Annie Ochitwa was near a lifetime-best in the 50 free (22.23) and 52 in both fly and back. -JA

Sure, they lost to UVA, but the focus is clearly on the end of season. Mostly depends on how well the sprinters show up after an injury-plagued season. -JA

Desorbo’s team is red-hot after beating NC State, and the sprint magic seems to be taking hold. -JA

Anna Pang looks really good, and Megan Moroney is back. Questions still loom– how will it all come together? There’s enough here, though, for UVA to push for a top 10 finish in March. -KO

A road win vs Louisville is a big feather in the cap for Kentucky and its historic backstroke crew. -JA

A team really coming into its own now gets sprint star Maddy Banic back. Early returns have been great: most notably a 22.7 in the 50 vs Florida. -JA

IU is consistently putting up the best medley relay times in the nation week-to-week and might be one of the few teams in the nation with a chance to unseat Stanford in any of the relay events at NCAAs. -JA

The Trojans lost their undefeated status with a two-loss weekend, but that’s what happens when you swim #2 Cal and #1 Stanford on back-to-back afternoons. Freshman Marta Ciesla had a weekend to remember, though, touching out Olympians Abbey Weitzeil and Simone Manuel on consecutive days in the 50 free. Ciesla is part of a killer freshman class that should have USC fighting for a top-5 finish. -JA

Arguably Texas’s best swims this month came in long course meters at the Austin Pro Swim Series. The Longhorns remain undefeated in dual meets and Claire Adams has been the third-fastest 100 backstroker nationwide this month. -JA

Still thin on sprinters, but dive transfer Freida Lim is going to come up big. -JA

All 5 relays are great. The core is young but still has an established star to lead the way in Mallory Comerford -JA

This team has been blowing out its recent competition, even ranked teams like #9 Indiana and #16 Ohio State. Gabby Deloof is the latest revelation, swimming near lifetime-best times this month and putting up the top non-Manuel 100 free time in the nation for January. -JA

A&M is constantly underappreciated, they have a great sprint core, and their breaststroke/IM group is insane. -KO

If Cal and Stanford weren’t so ridiculously loaded, this A&M team would be rising every week. Can they knock off one of the Pac-12 powerhouses? -JA

Noemie Thomas blasted a 51.7 fly last week to lead the national ranks for the month, and Maddie Murphy was 52.4 to boot. Cal has dominant flyers and backstrokers, and Abbey Weitzeil looks primed to rebound from a disappointing freshman campaign. -JA

The Cardinal gets world sprint champ Simone Manuel back along with distance ace Megan Byrnes. How much will the Card choose to get up and go at Pac-12s? And will we see any national records fall before NCAAs? One thing is for sure: next weekend’s Cal-Stanford dual could be an absolute smash if both teams get up for it. -JA

@Braden Keith, question: why did you rank Virginia so much lower than jared, Karl and Torrey did? Curious because I remember the same thing in the last Power rankings you guys did. Either way thanks for the article!

I think I’m probably less-reactive to dual meet results than the rest of the voters are – though you’ll notice that I did bump them up from my prior ranking at #20. Looking through the numbers, based on season-best times, they have 1 B Final scorer in the 50 free, 1 B final scorer in the 200 free, none in the backstrokes, none in the breaststrokes, and an A-final scorer in the 200 fly. Those mid-season free relays were spectacular, but so far their other 3 relays haven’t even qualified with provisional swims. Just doing the back-of-the-napkin math, I come up with 65-70 points. Historically, that only gets you 17th or 18th place at NCAAs. Factoring in the NC State… Read more »

Paige Madden is going to tear up NCAAS!!

What you should be comparing is the prior NC State drops from Invites to ACCs. That’s the real test. NC State has consistently made major drops at ACCs (as UVA did under the Bernardino regime), and that will result in a much truer predictor of NCAA scoring. And I predict Kylie Towbin scores this year on the boards.

They didn’t swim the 800 free relay at their invite, and that relay should score big. A relay of Jen Marrkand, Paige Madden, Morgan Hill, and Eryn Eddy, could probably make top 8 at NCAAs considering how weak everyone else’s 800 free relays look

I see where your coming from. For example even though ASU men beat Texas, Texas is probably going to do much better than ASU at NCAAs. That being said though, you can’t base in season ranking off of asumptions, and as such you have little to go off of besides dual meets.

Nonrevhoofan – as we note in every single Power Rankings thread, these rankings are not about dual meet viability or head-to-head results. They are focused on NCAA scoring ability, and there are good arguments to be made for all three of those teams to outscore UVA at NCAAs.