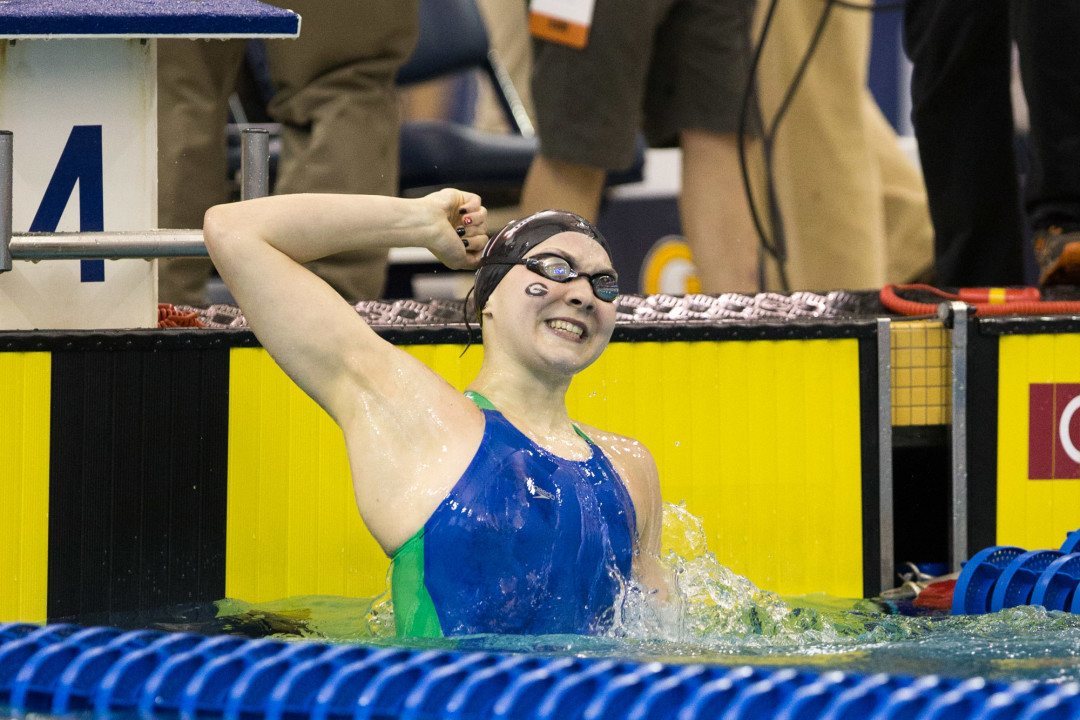 We have an extremely close 3 team battle set up for the final night at the 2016 Women's NCAA Championships. Cal, Stanford, and Georgia will fight to see who comes out on top. Current photo via Tim Binning/TheSwimPictures.com

Note: Diving is expected to be completed by 3PM Eastern Time. We will update these up/downs then. These Up/Downs also don’t reflect the 1650, which will be swum this afternoon and in finals.

This metric will help identify where teams are expecting surges in scoring and smooth-out the curves from particularly weak or strong events from a team. We’ll focus on tracking burned swims from the top 12 teams – on Friday, that means the top 12 teams based on psych sheet scoring .

Georgia will grab more points than expected in this event, with Kylie Stewart earning a place in the A final tonight. Both Cal and Stanford had a swimmer drop from their top 8 seed into the B final, but Cal still has Amy Bilquist in the top 8.

The Trojans will pick up big points in this one. They got both Kasia Wilk and Anika Apostalon into the final. Georgia, Cal, and Stanford each have one in the final. Farida Osman, Lia Neal, and Olivia Smoliga will compete in one of the most anticipated races of the night.

Georgia wasn’t expected to get any points in this event based on the psych sheet, but they’ll get a boost thanks to Annie Zhu, who made it back in the top 8. Texas A&M also improved on their projection, getting both Bethany Galat and Esther Gonzalez into the final.

Georgia and Cal each have 2 up in this race, so they’ll be fighting to get their hands on the wall first to outscore each other. Stanford will have Ella Eastin, who will battle with UGA’s Hali Flickinger and Louisville’s Kelsi Worrell for the title.

If it comes down to it, Georgia, Cal, and Stanford will all be battling it out in the championship final of this relay with a team NCAA Championship on the line.

We have an extremely close 3 team battle set up for the final night at the 2016 Women’s NCAA Championships. Cal, Stanford, and Georgia will fight to see who comes out on top. Georgia and Texas A&M have the most A finalists, with 5 ups each. Cal, however, has more finals swims overall with 4 ups and 3 downs. The Stanford Cardinal has 3 up and 3 down. The final scores will also depend heavily on the 1650 and platform diving.

Probably, Georgia wins because of the 1650 unless Stanford goes really good at Platform diving.