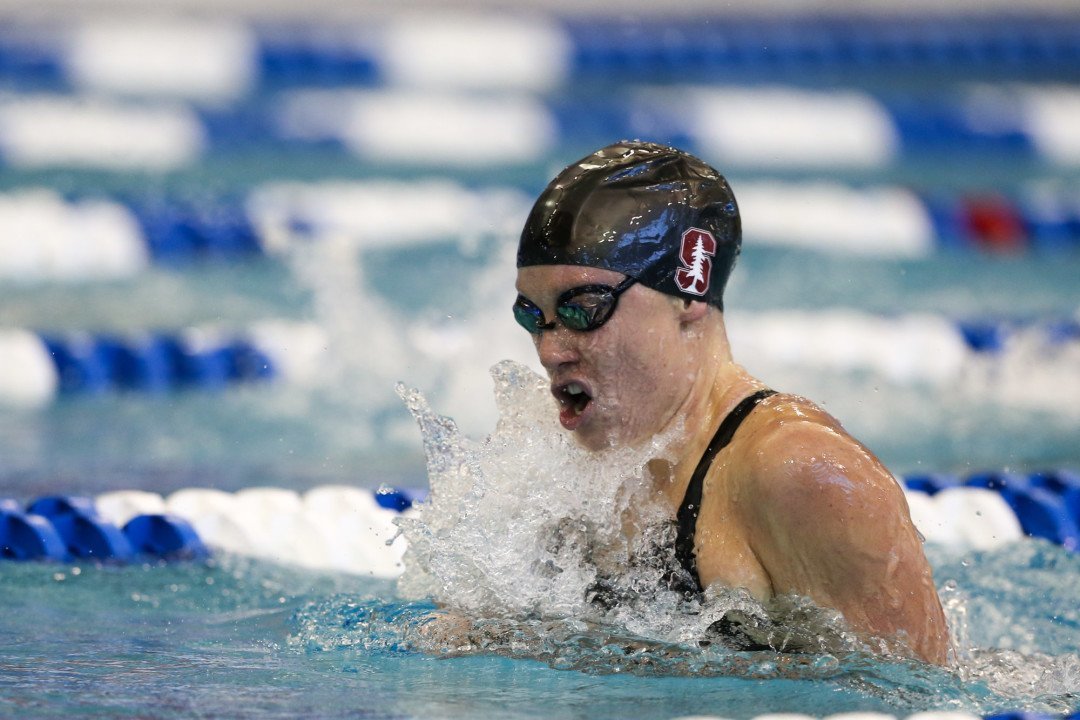 Stanford leads the teams in number of A finalists. The Cardinal has 6 ups, 1 down, and they're in the final of the 200 medley relay. They're looking to bounce back after a tough DQ in the 200 free relay last night, and have set themselves up well to get back into the top 3. Current photo via Tim Binning/TheSwimPictures.com

Note: Diving is expected to be completed by 3PM Eastern Time. We will update these up/downs then.

Texas A&M will get big points in this race. The Aggies make up almost half of the A final, and qualified all 3 of their swimmers into the top 8.

Cal got a trio of swimmers into the A final of this event, with Rachel Bootsma moving up from her seed to make the top 8. The Golden Bears will look to close the gap on the Georgia Bulldogs, who have one A finalist in this race.

Georgia has 2 A finalists and a B finalist in this event, where Cal only has Liz Pelton in the B final. The Bulldogs have an opportunity to pull ahead again here on the strength of Brittany MacLean and Hali Flickinger, who have a good chance to go 1-2 in the event.

Indiana has 2 swimmers, Kennedy Goss and Haley Lips, in the top 8. That gives the Hoosiers a chance to bump themselves further up in the top 10.

Indiana will once again have 2 A finalists, with Lilly King and Miranda Tucker racing in the 100 breaststroke. That gives Indiana a chance to enter the top 5 team battle.

Missouri will also have a chance to grab big points here, with Abby Duncan and Katharine Ross both in the top 8. Mizzou is in 14th right now, but some of the teams ahead of them don’t have any A finalists, or have just 1 total championship finalists on the night. They could shake up the top 10.

Cal and Stanford each have 2 in the top 8 of the 100 back. Kathleen Baker didn’t match her seed, but still has a chance to score for the Golden Bears in the A final.

Stanford enters this race as the American Record holder with their time from 2016 Pac-12s, but the 200 medley relay will be packed with tough competition. Several teams will battle it out to see who can get to the wall first and bring in the most points.

The USC Trojans, who currently sit 3rd, will have a hard time maintaining their position. USC doesn’t have any championships finalists, but will bring 3 consolation finalists and a relay back to B finals.

Stanford leads the teams in number of A finalists. The Cardinal has 6 ups, 1 down, and they’re in the final of the 200 medley relay. They’re looking to bounce back after a tough DQ in the 200 free relay last night, and have set themselves up well to get back into the top 3.

Cal has 5 ups, ahead of Georgia, Texas A&M, and Indiana, who each have 4 ups. That could give the Golden Bears a boost towards catching up to Georgia in the team rankings, but the Bulldogs should be able to hold on to the lead if they hold their own.

Sorted by Ups then Downs: