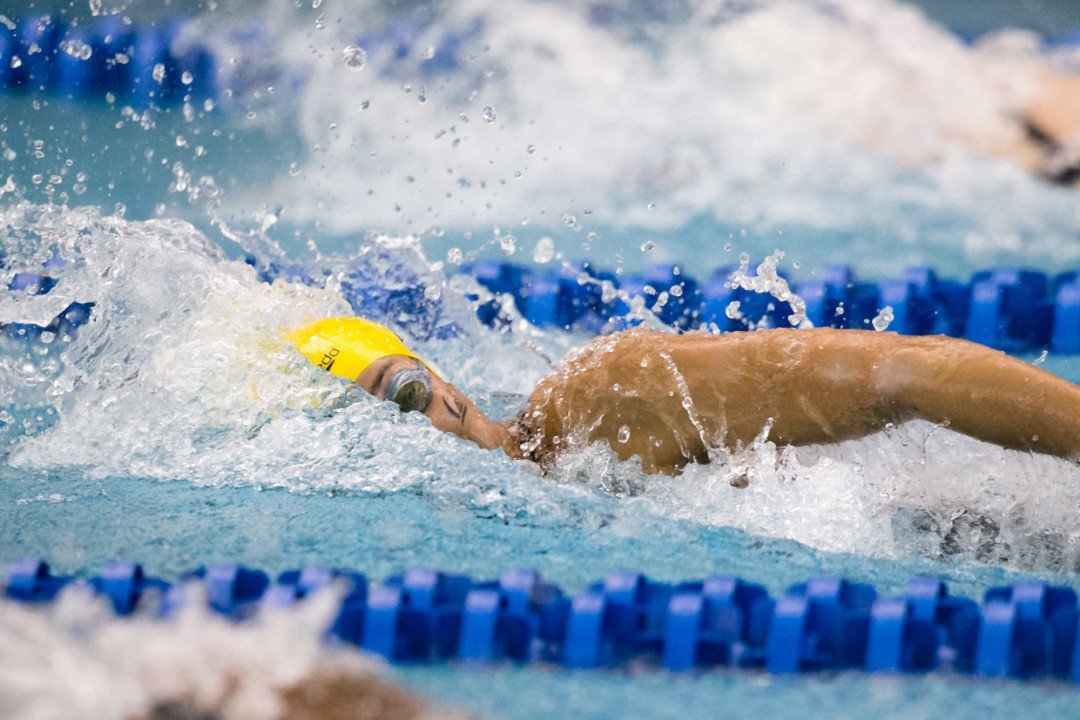 Cal’s Farida Osman is the top seed in the 50 free at NCAA’s and will certainly challenge Lara Jackson’s NCAA record of 21.27. Current photo via Tim Binning/TheSwimPictures.com

Cal’s Farida Osman is the top seed in the 50 free at NCAA’s after posting a quick 21.32 at PAC-12 championships in February. The 2012 Olympian for Egypt is having a great season for Cal and is making significant time drops in her sprint freestyle events. Osman is seeded .3 seconds ahead of the 2nd seed, which makes her the strong favorite in the 50 free this year. Without 2015 NCAA champion Simone Manuel, Osman is seeded well-ahead of the rest of the pack and will certainly challenge Lara Jackson’s NCAA record of 21.27.

Georgia’s Olivia Smoliga won the 50 free at SEC Championships, posting a time of 21.67, which is good enough for the 3rd seed at 2016 NCAA’s. The 2014 NCAA champion in this event, Smoliga will likely be Osman’s best competition for the win in the 50 free. As a freshman, Smoliga posted a time of 21.59 to win the 50 free at NCAA’s. After a disappointing 8th place finish last year, Smoliga will be looking to reclaim her victory. Smoliga is ready to swim a low-21 at NCAA’s this year, after swimming a solid time at SEC’s with much less competition than she will face at NCAA’s.

Chinese national swimmer and 2009 World Champion Zhesi Li (Ohio State) comes in as the 2nd seed for NCAA’s with a time of 21.63. Li placed 16th at 2015 NCAA’s with a time of 22.62 in finals, adding .6 to her seed time of 22.03. Based on past disappointing NCAA performances, it may be tough for Li to hold onto the 2nd spot or even finish in the top 8. But, Li still could challenge the top sprinters at NCAA’s if her times remain consistent with this year’s performances. Another swimmer who is likely to finish in the top 3 is Louisville’s Kelsi Worrell. After a fantastic 2014-15 season, Worrell is the 4th seed in the 50 free at NCAA’s with a time of 21.85. Last year, Worrell placed 3rd in this event with a time of 21.62, beating Osman, Li, and Smoliga. Worrell is continuing to improve on her stellar season from last year and is expected to see similar success at NCAA’s in 2016. Don’t count her out of the top 3 and don’t be surprised if she beats Osman for the win.

Texas A&M’s Beryl Gastaldello is seeded .01 off of her seed time from last year at NCAA’s with a time of 21.86. Gastaldello, the 5th seed, placed 10th last year with a 22.09 in finals. At 2016 SEC Championships, Gastaldello finished with a time of 22.09 in 5th place. If Gastaldello can post another 21, she should finish in the top 8 this year. Eighth seed Natalie Hinds (Florida), 10th seed Faith Johnson (Tennessee), and 11th seed Madeline Banic (Tennessee) all finished ahead of Gastaldello at SEC championships. Hinds posted her seed time of 21.92 in prelims of SEC Championships, finishing with a time of 22.06. Hinds is definitely stronger in the 100 freestyle, but could place in the top 8 if she can repeat her performance from SEC prelims. Johnson finished 8th in the 50 free at 2014 NCAA’s and 11th last year, both years finishing with 22’s in the event. If Johnson can swim a mid to high 21 in the 50 free at NCAA’s this year, she has a good shot at finishing in the top 8. Tennessee freshman Madeline Banic has posted significant time improvements in her sprint freestyle events this year. After dropping over a second from her best time in the 50 free from high school, Banic is seeded 11th at her first NCAA Championships. Banic placed 3rd at SEC Championships and could place in the top 8 at at NCAA’s if she continues to drop time in the 50 free.

While Osman is the clear favorite in the 50 free this year at NCAA’s, keep an eye on Worrell and Smoliga to seriously challenge her for the win. With solid time drops, Hinds and Neal also pose a threat to the top 3 this year as well. And, don’t be surprised if some records fall as some of the fastest sprinters compete for first place in the 50 freestyle at women’s NCAA’s.

Dark horse: California freshman and U.S. National team member Amy Bilquist is seeded 13th with a time of 22.10. Bilquist has proven that she is one of the top sprint freestylers in the country and her racing experience could shine through at her first NCAA championships. Bilquist has been stuck in the low-22’s in the 50 free for some time now, but this could be the meet that she finally breaks into the 21’s in the 50 free. If she does, Bilquist could challenge for a spot in the top 8.