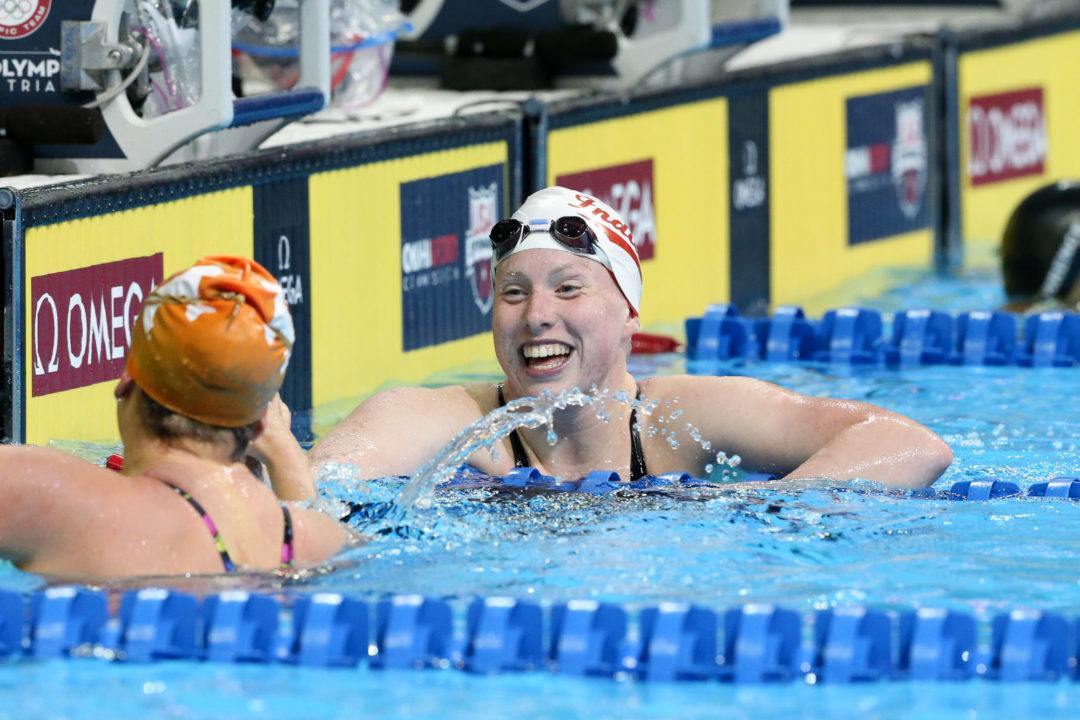 Abbey Weitzeil qualified for her first Olympic team with a new U.S Open record in the 100m freestyle en route to a swift 53.28.

Weitzeil managed to hold off Simone Manuel during the last 10-meters who absolutely charged in order to put up a 53.52. American record holder Amanda Weir touched in just behind Manuel in 53.75.

Lia Neal grabbed the fourth relay position with a 53.77 performance. Likely, the United States will take six for the relay, which will then include Allison Schmitt and Dana Vollmer.

Katie Ledecky is going to be the headline of every article related to swim trials tonight. It’s going to talk about how Ledecky went out over two-seconds under world record pace at the 100, and how she held on to finish within roughly half-a-second of her own world record.

The real story, is that Katie Ledecky is beatable. And the woman who proved that Ledecky is in fact human: Leah Smith.

Smith went out fast, although Ledecky was about a body-length and a half ahead of Smith at the first 100, Smith maintained that position for the remainder of the race. Towards the end, she even chased down Ledecky towards the wall.

Smith’s performance now makes her the fourth fastest performer of all time in the 400m freestyle, and the second fastest (only behind Ledecky) in a textile suit.

Katie Ledecky put everyone on the edge of their seats through 600-meters tonight as she chased her own world record, finishing shy of that mark, but still claiming gold and securing the event for Rio.

At the 50-meter mark Ledecky turned slightly faster than the first 50 split of her world record. By the 100, she was 0.99 seconds under world record pace. At the 200, she was almost a full second and a half under pace splitting a 1:58.75.

At the 650, Ledecky really started to drop off the pace, slowly but surely falling farther and farther from her record each 50. At the final touch, Ledecky was an 8:10.32 to take the win, just slightly faster than what she swam yesterday morning.

As expected, Leah Smith finished second in 8:20.18 to secure a second individual event for Rio.

As originally reported by Mitch Bowmile

Out fast as she usually is, Vollmer turned first at the 50-meter wall with both her and Worrell already establishing themselves as the clear leaders. Coming off the wall Worrell began to slowly but surely close in on Vollmer.

In the last 15-meters, Vollmer began to tighten up slightly and Worrell flew past her, putting almost a body-length between the two as she stretched out to the wall to punch in her ticket to Rio with a time of 56.48.

Worrell’s last 50 was fast, in fact she split under 30-seconds coming home with a swift 29.97 split to secure her first place position.

Although Vollmer finished behind Worrell, she still managed to touch in for second and will also likely be heading to the Rio Games.

Vollmer was a 57.21 at the touch, still over a full second ahead of third place Kendyl Stewart who grabbed third in 58.22.

Worrell’s time now vaults her to second in the world behind only world record holder Sarah Sjostrom.

Lilly King has had an incredible season; she was electric at the NCAA Championships, and now just a few short months later she’s secured her spot on the Olympic roster to represent the stars and stripes in Rio.

King was out first with Katie Meili hot on her trail, but in the last 25-meters she closed strongly to put up a 1:05.20. That time for King is the fastest time in the world this year, distancing herself from previous world number one Yulia Efimova by exactly half-a-second.

Meili was a safe second behind King in 1:06.07, putting up the sixth fastest time in the world this season. Molly Hannistouched behind Meili in 1:06.65 for third.

Breeja Larson took advantage of the opportunity she was given to swim in the championship final. She qualified ninth after prelims, but a scratch by Melanie Margalis bumped her into the final. The 2012 Olympic Trials champ finished fourth in 1:07.53.

Olivia Smoliga and Kathleen Baker are going to Rio.

In one of the most anticipated finals of the night, Smoliga and Baker managed to hold on to their positions as the top 100m backstrokers after the semifinals by finishing first and second. Smoliga charged on the last 20 meters and pushed out in front to grab the win in 59.02.

Baker wasn’t far behind her in 59.21. Amy Bilquist touched in third in 59.37 just 0.16 seconds off qualifying for her first Olympic team.

After taking the seventh and eighth seeds in the 100m backstroke after semifinals it was clear that Missy Franklinand Natalie Coughlin were going to have their work cut out for them.

Between the two of them, they make up the last three Olympic gold medals in the 100m backstroke, and neither of them will get the chance to add another one this time around. Franklin turned in eighth, and wasn’t able to make much of a push at the end of the race, ultimately finishing in seventh with a 1:00.24. Coughlin faded to eighth, clocking in a 1:00.48.

Maya DiRado took the first final of the night with a swift 2:06.90 that put her well ahead of the rest of the field as she won her third event of these Olympic trials. DiRado took the lead at the 100-meter mark and never looked back, holding her consistency into the wall as she touched in for gold at 2:06.90.

The race for second behind her was between Amy Bilquist, Missy Franklin, and Lisa Bratton for the majority of the race. Although Danielle Galyer took it out fast with the leaders, she was passed heading into the 150-wall.

Maya DiRado added a second event to her schedule for the 2016 Rio Olympic Games, rocking a swift 2:09.54 to give her the win by over half-a-second.

The real battle was for the second spot. On the final turn, Melanie Margalis turned in fifth, over a body-length behind DiRado and Leverenz who were leading the way.

Off the wall, Margalis started charging and she began to creep up on Leverenz. Leverenz didn’t budge, and the two went stroke for stroke into the wall. Margalis opted for a glide in, Leverenz took the extra stroke.

With the second spot going to Margalis, Leverenz will not be going to the Olympic Games.

I love swimming but I can’t swim as good as ya’ll!

Thanks for the easy access to finals’ races. Missing the 200 breaststroke and the 200 butterfly ?