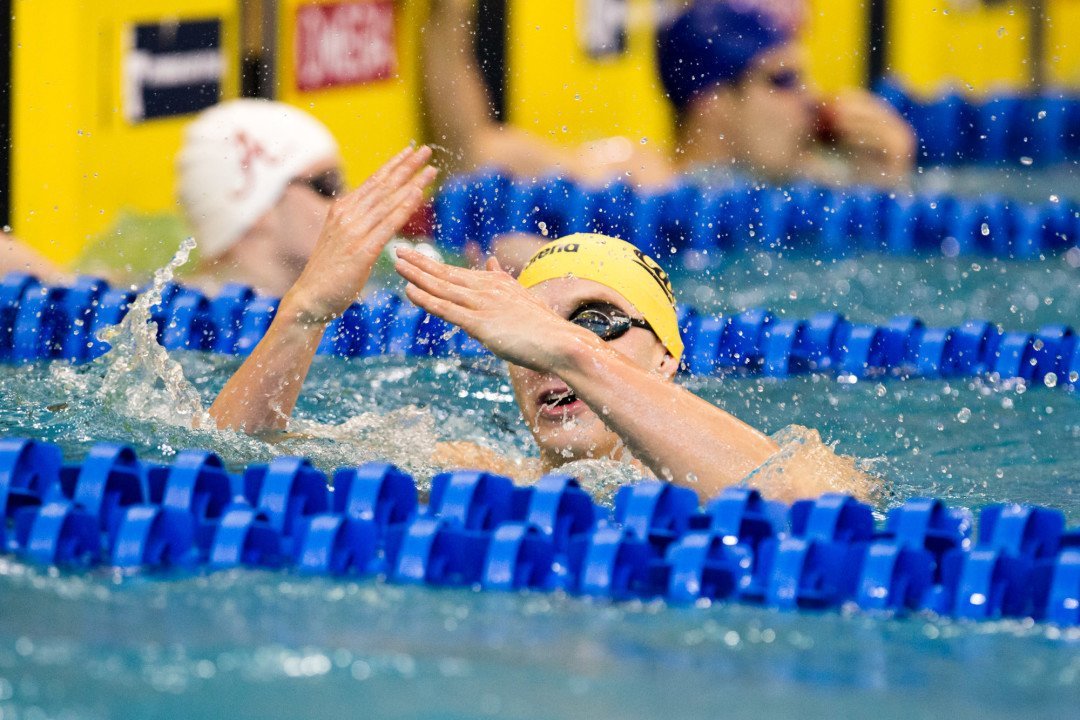 The men will have to battle it out in Omaha to determine who the Americans will send up against a stacked international field that includes Mitch Larkin, Ryosuke Irie, and Evgeny Rylov. Archive photo via StockImages

Since the 1996 Olympics in Atlanta, the world has seen an American at the top of the men’s 200 backstroke podium at every Games. Brad Bridgewater (1996), Lenny Krayzelburg (2000), Aaron Piersol (2004), and current U.S. National Team members Ryan Lochte (2008) and Tyler Clary (2012) have led the red, white, and blue to 200 back victory. Heading into the Rio Olympics, the U.S. will have their hands full in this event. The men will have to battle it out in Omaha to determine who the Americans will send up against a stacked international field that includes Mitch Larkin, Ryosuke Irie, and Evgeny Rylov.

For the past 2 seasons, Ryan Murphy has started to build his presence on the international stage for Team USA. He swam in his first long course World Championships last summer, racing in the 200 back, the mixed 400 medley relay, and the men’s 400 medley relay. Individually, Murphy made his first world championship final appearance in the 200 back, winding up 5th in a personal best 1:55.00. He had an explosive NCAA season, breaking the American records in both the 100 (43.49) and 200 yard backstrokes (1:35.73). To follow that, he’s already gone a best time in the 200 meter back this year, posting a 1:54.94 at the Canadian Olympic Trials in April. Murphy’s momentum and his experience as an Olympic Trials finalist in 2012 set him up well for Omaha.

Ryan Lochte, the 2008 gold medalist in this event, has a big decision to make about whether or not he will swim it in Omaha. It’s possible that Lochte may not swim the 200 back because it clashes with the 200 IM at trials. Lochte, now 32, has welcomed the challenge of that tough double in the past, but the recovery time between events has become a bigger issue with age. Lochte was the favorite to win this event in London before Clary pulled off the upset, and ended up with the bronze behind Irie. He bounced back the next year, winning 2013 Worlds in 1:53.79. In 2014, he was 3rd in the event at Nationals with a 1:56.47, but opted out of the event at Pan Pacs, and didn’t swim it at 2015 Worlds. If he chooses to race the 200 back at trials he could make a 3rd Olympic appearance in the event.

Matt Grevers, the 2012 Olympic gold medalist in the 100 back, hasn’t traditionally swum the 200 back at major meets, but it also worth mentioning. At 2012 Trials, he qualified 3rd after prelims, but scratched out of the race before semifinals. He swam a textile best this season to win U.S. Winter Nationals in December, clocking a 1:57.24.

Jacob Pebley, Murphy’s teammate at Cal, won U.S. Nationals in this event last summer. He also swam a new best time to win the 2015 World University Games, posting a 1:56.29. This year, he swam a new best time to place 2nd behind Murphy at NCAAs in the 200 yard back in 1:38.50. Shortly after, he came close to a best time with a 1:56.40 at Canadian Olympic trials. Pebley will return to Omaha after finishing 7th in the final at 2012 Trials.

Sean Lehane, a Tennessee senior who raced Murphy and Pebley at NCAAs, made his first U.S. National team last year. He represented Team USA at 2015 Pan Ams, where dropped almost 2 seconds to set a new meet record in prelims at 1:57.11, and won gold in the final. Lehane will look to make his first Olympic Trials final after placing 26th in this event in 2012.

Patrick Mulcare will make his first Trials appearance with strong momentum from his performance at 2015 U.S. Winter Nationals. Mulcare dropped over 2 seconds from his best time, clocking a 1:57.34 to finish 2nd to Grevers by just a tenth. He enters Omaha as the 3rd fastest American so far this season.

Virginia Tech’s Robert Owen blasted a new personal best 1:57.96 in a long course time trial the day after NCAAs. That time makes him the 5th fastest American this year. Owen was a scorer in the yards version of this event at the 2016 NCAA Championships, where he posted a 1:40.60.

Dynamo Swim Club’s Michael Taylor represented the U.S. in this event at the 2015 Junior World Championships. Taylor posted a personal best 1:58.10 at Nationals to make the team before going on to take silver at Junior Worlds. At 17 years old, Taylor will travel to Omaha for his first Olympic Trials, and has a shot at making the final.

Texas’ Jonathan Roberts swam his first sub-2:00 since 2014 to win the 200 back at the Longhorn Elite Invite. Roberts clocked a 1:58.74 to beat Grevers at that meet, matching his personal best from 2014 Nationals. That time makes Roberts the 10th fastest American this year, and puts him in the conversation as a potential finalist in Omaha.

Anyone care to inform me what the meaning of the first pictures caption is? the joke went over my head

Currently zero people from swim Mac are expected to approach their 2012 times in these predictions… so Dave marsh is just a bad coach?

You’re absolutely right. SwimSwam predicts 2 men won’t beat times from the peak of their career. That MUST mean that they think David Marsh is a bad coach.

I’m am suprisied too see that Hennessey Stuart was suprisingly left of not only the top 8 prediction but also surprinsgly enough the dark horse mention to. The guy hads monster season during NCAA’s and swam very well in the 200 backstroke during the NCAA championships beeting several other hi raked 200 backstroker swimmers. I’d would not be surpise if h at least makes the top 8 finals and would also bet has chance to become poedium if not a chance to make the team. Would not that be quiet the STATEment

If we are going to assume for the sake of this list Lochte swims the 200 back why not assume conger does too. I’m betting conger over pebley

Is he even swimming it? Me think not

Conger seems to be going away from backstroke. 100 and 200 fr and fly seem to be his events now, particularly 200fly after his swim in SA last summer.

Jack has ditched backstroke for good. Maybe will do it in a dual meet or something if his team needs it next year but no more big meets.

He’s a crazy guy. As a high schooler, he dominated in the 500 and backstrokes. In freshman year, he swam backstroke and 100 fly at NCAAs. Then by sophomore year he was primarily a butterflyer. That’s some versatility right there!

3
0
Reply
JP Input is too short
Reply to  Uberfan

FWIW he’s in it on the psych sheet. Of course, he’s also entered in the 50 free too and I doubt he’ll swim that that close to the 100 fly.

Ryan Lochte should not and will not swim the 200 back at trials. His events should be the IM’s and the freestyles for relay spots only. Thats a total of 11 races which lochte knows how to handle. But anymore than that could be costly considering his age

I agree. Plus I think Lochte needs to see where his best chances are of earn any type of medal. Even if he could make the team in the 2 back, he would probably have to be a sub 154 to be in contention with the likes of Larkin , murphy and irie. I think he should focus on the ims and 800 free relay. I think he would have a tough time trying to medal in 200 free

NO 200 FREE, that must not happen. He has a low chance of getting a medal anyway. Even though he doesn’t care about that because of a good race, But I think IMS, Free Relays. And that’s IT. IT. 200 back and I’ll die, lol. He’d get the bronze.

I agree, despite being strong at several events, I think Lochte is only a medal threat in a handful of events, some of which he should probably not pursue due to his age and the schedule.

This is what I have been thinking about Lochte since 2015

I pretty much wrote him off in the 200 back as well, and there’s no way he can swim the double at the Olympics again, but maybe, maybe, he’ll surprise everyone and pick the backstroke over the IM. He could swim the double through semis at OTs, to see where he’s at. 2 back is deeper internationally, but based on his 1:55.8 last summer, Lochte’s almost as far from the gold-winning time in the IM, as he is in the backstroke. Probably 1.5 to 2 seconds away, in either event. I’d love to know what he’s been doing in training.

I start to wonder if that’s not really a 49-meter pool, even 48, at trials with all these very optimistic time predictions I read every day on swimswam.
I need to investigate that.

Chill out people can have their own opinions, not everyone is going to agree with you Bobo.

Hswimmer, where do you see I said that I don’t accept different opinions from mine?
That’s the goal of these forums. We can confront our opinions.
It’s my right to say, with humor that I find some time predictions too optimistic.
However I see that you disagree that I disagree with swim fans who predict crazy fast times in most of events.
That’s very strange.
You are doing what you unfairly blame me for doing.
I like that concept of 48 or 49-meter pools to explain some crazy times. Too bad it doesn’t make you laugh.

As a swim fan you should know that at the Olympics the swimmer with the fastest time going in doesn’t always translate to world records and/or a gold medal. It’s about who is best that day. It’s not uncommon for athletes to swim faster at selection meets than at the games. AND this is not exclusive to just U.S. swimmers, happens with plenty of others.

Or there’s no more debate.

The funny thing is, on average, compared to other countries’ top swimmers top US swimmers are more likely to swim faster at the Olympics than at the trials. And that’s why, with a very few exception, USA has always been the most successful in Olympics swimming, by far. Like you said, as a hardcore swim fan, it is kinda strange Bobo didn’t know this.

You mean you don’t think every world record but the men’s 100 breast and women’s sprints will be broken next week? 🙂